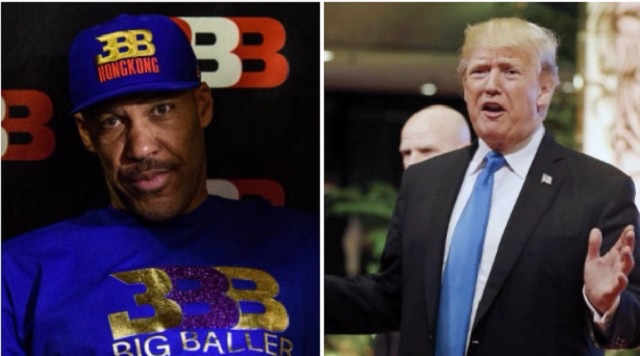 Now that the three basketball players are out of China and saved from years in jail, LaVar Ball, the father of LiAngelo, is unaccepting of what I did for his son and that shoplifting is no big deal. I should have left them in jail!

The players promptly said thank you. It seemed as if the saga was over.

That is until LaVar Ball, who may be the only person in the world more outspoken and more proud of his last name than President Trump is, issued an insult towards the president yesterday.

LaVar Ball downplayed his son’s shoplifting incident in China, as well as President Donald Trump’s involvement in getting LiAngelo Ball and two other UCLA basketball players back to the United States earlier this week.

“Who?” LaVar Ball told ESPN on Friday, when asked about Trump’s involvement in the matter. “What was he over there for? Don’t tell me nothing. Everybody wants to make it seem like he helped me out.”
This led to the inevitable; Twitter and the internet predicting a Donald Trump v. LaVar Ball show down.

We laugh now but LaVar Ball vs. Donald Trump at WrestleMania is a real possibility

Lavar Ball rushing to do an interview about Donald Trump for more publicity pic.twitter.com/283LvXklwT

Strike up another victory for Big Baller Brand. The more hype, the merrier. A Donald Trump vs LaVar Ball beef truly defines America in 2017. Can't believe it took this long.

LaVar Ball vs. Donald Trump is the epic clash of the intellectual titans America deserves.

It is unclear what, if any, political or business ramifications there will be to President Trump or the Big Baller Brand from this fiasco.