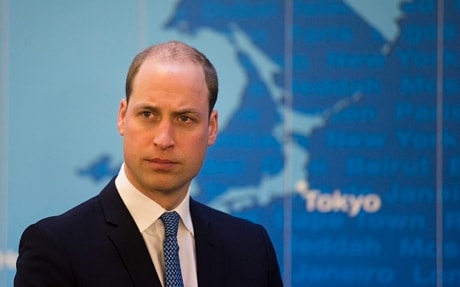 “The world’s population is increasing fast”

Prince William thinks there are too many damn people on the planet, and is now sounding the alarm before we reach global capacity.

Speaking at a wildlife conservation charity gala on Thursday, the Duke of Cambridge said the growing global population puts “enormous pressure” on wildlife that will have a “terrible impact” on the world unless measures are taken to curtail it.

“In my lifetime, we have seen global wildlife populations decline by over half,” he said. “Africa’s rapidly growing human population is predicted to more than double by 2050 — a staggering increase of three and a half million people per month.”

“There is no question that this increase puts wildlife and habitat under enormous pressure,” he continued. “We are going to have to work much harder to ensure that human beings and other species can co-exist.”

One of the first causes pushed by William when he started public life was the The Tusk Trust, a wildlife conservation group in Africa.

“The world’s population is increasing fast,” Charles said in 2010. “It goes up by the equivalent of the entire population of the United Kingdom every year. Which means that this poor planet of ours, which already struggles to sustain 6.8 billion people, will somehow have to support over 9 billion people within 50 years.”

Prince Philip has taken it even further, calling for “voluntary family limitations” while lamenting how human populations have reached “plague proportions.”

As the years press on, it appears that Prince William has taken more after his father, Prince Charles, and less after his mother, the late Princess Diana. Just a few months ago, the Duke’s family man facade took a hit when footage showed him dancing drunkenly with his hands around the waist of some mystery woman while visiting Switzerland.

Vis-a-vis population control, William and his wife Kate Middleton have clearly not taken the “me first” approach, as they are now pregnant with child number three.