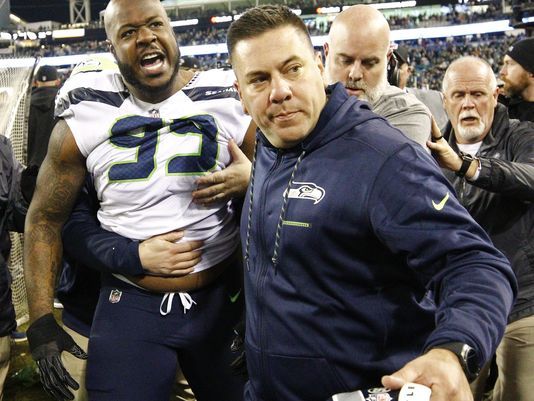 I caught video of NFL player Quinton Jefferson trying to climb into the stands to attack a fan who threw food at him.  Jefferson was so enraged that it took three huge security guys to restrain him.  Obviously, the fan is an idiot and should suffer consequences for his action.

Jefferson’s intolerance with anyone “dissing” him comes from the gang culture mindset embraced more and more by pro athletes over the years – particularly black pro athletes.  Jefferson behaved like a common street thug.  Thank God security restrained Jefferson, preventing him from stupidly possibly ending his football career or worse over something so trivial.

Jefferson’s unprofessional thuggish behavior was another nail in the coffin of growing disrespect for and repulsion from the NFL.  Folks, I love pro football.  But these guys’ arrogant lack of respect for fans, our military, our police, and the country that made them millionaires turns my stomach.

Even more disgusting is watching leftist media and power-brokers lining up to kiss the derrières of NFL players who give America and football fans their middle finger.  Colin Kaepernick, who started pro athletes kneeling during our National Anthem, was named GQ magazine’s citizen of the year.

NFL player Michael Bennett is also being rewarded for kneeling during the National Anthem, expressing his disdain for his country.  Bennett has been nominated for the NFL’s Walter Payton Man of the Year award.

NFL Hall of Fame superstar Walter Payton’s bravery and integrity made him a profile in courage.  Payton lost his battle with a rare liver disease, dying at age 45.  Gifting Payton’s Man of the Year award to Bennett for simply disrespecting our country and behaving like an anti-American leftist operative is a disgraceful insult to Payton’s legacy.  Leftists find a way to urinate on and politicize every good and decent thing we hold dear in our country.

Clearly, if you want rock-star status and to be promoted as a hero by the American left, simply say, “Screw you, America!”  You’ll receive extra credit and overwhelmingly favorable press if you include “Screw you, Trump!”

Make no mistake about it, folks.  Leftists showering anti-American millionaire NFL players with praise and awards is the American left’s way of giving us the finger.

Leftist media portray Trump voters as mostly minority-hating white supremacists.  In reality, we are America-loving, hardworking everyday people who have been shackled in chains by political correctness and locked up in the deep, dark dungeon of tyrannical liberalism for the past eight years.

But here is the good news.  Trump opened the heavy door, liberating us.  As we slowly emerged from our dark imprisonment, we shielded our eyes, sensitive to the beautiful bright sunlight of freedom.  Emboldened by our new leader, Americans have ceased to put up with the leftist attacks on who we are as a people – our principles, values, and godly traditions.

Though under-reported, the NFL is paying a huge price for coddling players who behave like criminals, anti-American activists, and street thugs.  Fans are tuning out the NFL on TV and not using their tickets for the games.  During Monday Night Football, announcer Jon Gruden unintentionally exposed the truth when he said there were not a lot of people in the stadium.

Sadly, it is becoming increasingly challenging to find NFL players parents can point to and tell their kids to be like.

In my day, I loved Baltimore Orioles shortstop Cal Ripken – a super-class act on and off the field.  I even wrote a song about him titled “Ironman.”

One thing about leftists is, they never retreat.  Despite the destruction of the NFL as a business, NFL management will continue allowing its employees to dis fans, cops, and America until the NFL, in essence, dies.  I pray I am wrong, because I love pro football.

(First reported by Lloyd Marcus and published by the American Thinker)   http://www.americanthinker.com/blog/2017/12/quinton_jefferson__another_nail_in_the_nfl_coffin.html (December 13 2017)