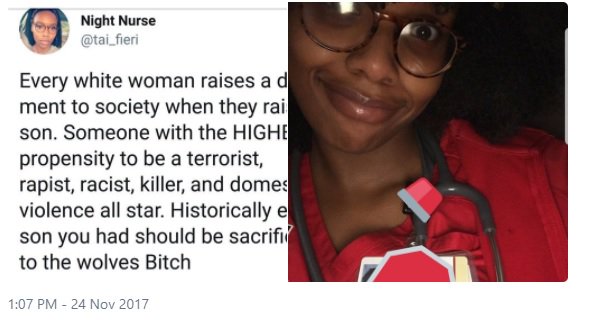 Taiyesha fired off a series of racist anti-white tweets this past weekend. 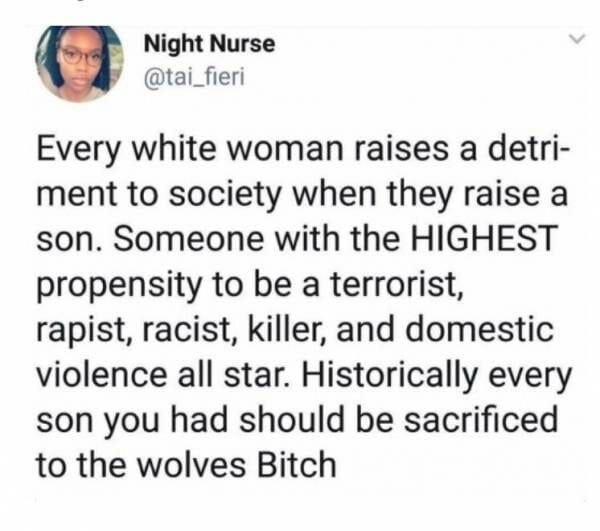 How stupid was that tweet?
It was offensive, racist and ignorant all at the same time!

Indiana University Health investigated Taiyesha Baker after being made aware of her offensive remarks.

Indiana University Health is investigating a controversial tweet allegedly sent by a nurse who works for the organization.

The tweet, from an account named Night Nurse that has been linked to an employee named Taiyesha Baker, said: “Every white woman raises a detriment to society when they raise a son. Someone with the HIGHEST propensity to be a terrorist, rapist, racist, killer, and domestic violence all star. Historically every son you had should be sacrificed to the wolves Bitch”

The account, @tai_fieri, was deleted and appears to have been recreated by a different user who posted new tweets Saturday.

IU Health spokesman Jason Fechner confirmed that Baker worked for the health system when the tweet was posted. He said human resources is investigating and will take appropriate action based on what it finds. He did not elaborate on the protocol for the investigation.