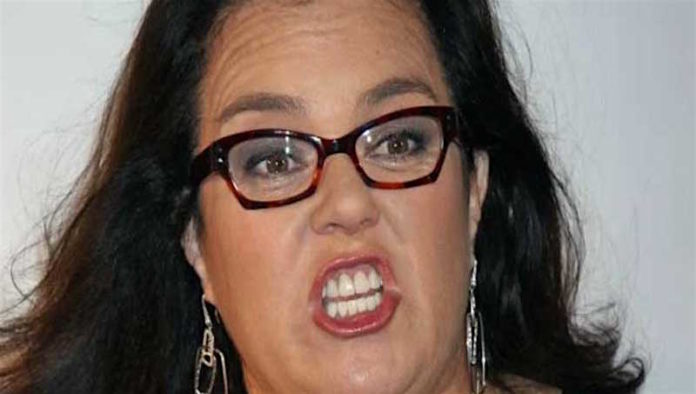 I was going to title this article: “Rosie O’Donnell Has A Boner For Robert Mueller” but our research department assures me she is not transgender. Could have fooled me. In any case, the Trump-hating glob of uselessness has a major crush on the special prosecutor currently investigating the media fiction of the President colluding with the Russians to steal the election from Hillary Clinton. Considering Rosie’s fragile metal state, I would recommend that Mueller get a personal protection order. Immediately.

Mueller has been on the case for quite some time now and so far all he has is that some people associated with Trump did procedurally-wrong things before they worked for him. It’s not exactly the slam-dunk democrats have promised, but liberals don’t process facts very well. To O’Donnell, Mueller is taking Trump down and that makes her tingle in her funny place.

Because Seth Meyers gets all of the top celebrities on his show, he recently had a broken down suicidal out of work loser on. Because late night TV only does Trump material now, they of course talked about the President. More specifically, Robert Mueller’s investigation.

“I’m so in love with Bob Mueller,” O’Donnell said.

O’Donnell also said she wants to get a portrait of Mueller tattooed over her heart. Good luck finding a tattoo artist willing to work in between her saggy old lady boobs.

“I wanna get posters, I wanna meet him. I just think he is it. He looks to me like Superman, like Captain America, like justice has finally arrived back on our shores and we are going to right ourselves again,” said O’Donnell.

I don’t think Rosie is far off from kidnapping Mueller, putting him at the bottom of well, and demanding he put the lotion in the basket. Either that or some kind of sledgehammer ankle breaking so she can have him all to herself. Either way, this interview should have caused the hair on Mueller’s neck to stand up and sent a chill down his spine.

It’s actually going to be much worse when Mueller doesn’t deliver Donald Trump to jail. O’Donnell is going to flip out when he concludes his investigation and the only the only Russian colluders he finds are Hillary Clinton and her campaign. At that point Silence of the Lambs and Misery are going to become Fatal Attraction. I hope Mueller doesn’t have a pet rabbit because if he does that thing is getting boiled.

To be honest, I’ve always felt that O’Donnell’s over-the-top and irrational hatred of Donald Trump was masking the fact that she was secretly in love with him. Maybe her revealing a crush on Robert Mueller is a sad attempt to make Trump jealous.

I didn’t think it was possible for Rosie O’Donnell to be any more pathetic, but here she is crushing on a man just because he is investigating some Trump associates. In reality, there is no evidence that Mueller is even investigating Trump, so she’s definitely getting her hopes up over nothing. Again, considering how emotionally damaged she already is, this is just a prelude to a disaster for her.