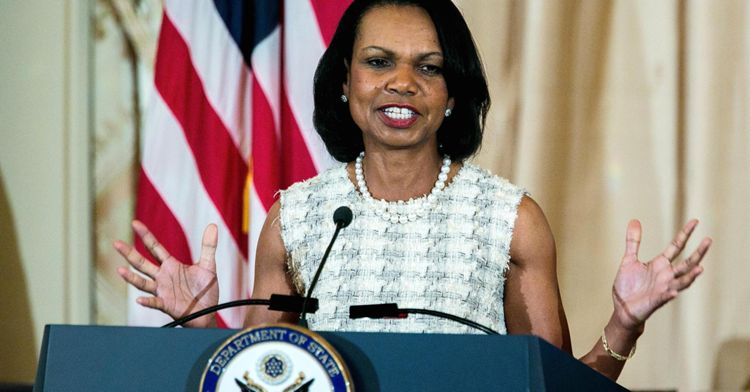 President Donald Trump may sound different than other presidents, but he believes in American values and tries to act in the best interest of the United States, former Secretary of State Condoleezza Rice told CNBC on Wednesday.

“I believe every president of the United States stands for our values,” said Rice, who served as secretary of State and national security advisor during the presidency of George W. Bush. “You heard President Trump say, for instance, after the Syrian chemical attack, we can’t let that stand. What he was saying was the president of the United States can’t let that stand.”

From the sidelines of the KPMG Women’s PGA Championship and KPMG Women’s Leadership Summit at the Olympia Fields Country Club in Illinois, Rice said on “Squawk Box” Trump knows the importance of alliances and expects him to forge ties with Democracies around the world.

“While the language may be different, and we might talk about needing to deal with policy, I think you’re going to see … that Americans’ interests in values are always linked,” Rice said. “It’s early days in this administration. Let’s remember that.”

On the global landscape, Rice said the U.S. needs to protect itself better from cyber intrusions, highlighted by Tuesday’s latest global ransomware attack and evidence of Russian interference in the 2016 presidential election. She added Russia, in the context of the election meddling, needs to be viewed as a “hostile power.”

It’s a tough spot for the Trump administration because the U.S. needs a decent relationship with Moscow, Rice said, but stressed “any interference in our election has to be investigated — and not just investigated to see what happened but to see how it doesn’t happen again.”

Rice said she has confidence in special counsel Robert Mueller’s ability to get to the bottom of Russia’s role in trying to influence the U.S. election. Mueller was FBI director at the same time Rice was serving in top posts in the Bush 43 administration. “In the meantime, we need to go about the business of governing because that’s really what the American people want,” she urged.

“While Kim Jong Il was a dictator, and someone that we couldn’t ultimately do a deal with” in the George W. Bush administration, Rice said, “we have to worry that Kim Jong Un might be even more reckless than his father was.” Kim Jong Un took over as leader of North Korea after his father died in 2011.

As secretary of State, Rice said, “I do have regrets that we weren’t able to stop” North Korea’s nuclear ambitions “more forcefully.”

She said she has confidence in current Secretary of State Rex Tillerson, adding Trump and Tillerson have a “very good” relationship despite recent media reports to the contrary.