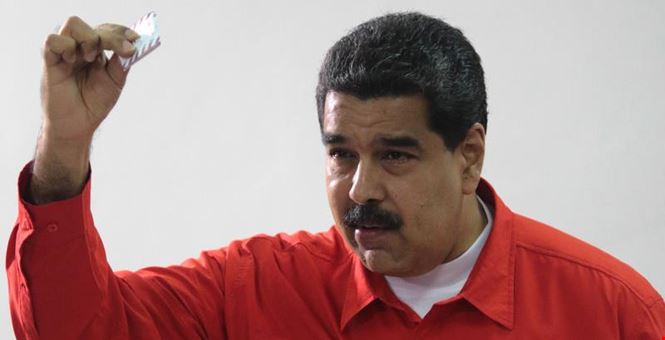 The countries ‘have provided capital, goods, services, and political backing’

Russia and China have played a major role in keeping the dictatorial Maduro regime in Venezuela afloat, according to expert testimony before the House Foreign Affairs Committee Wednesday.

Evan Ellis, a senior associate at the Center for Strategic and International Studies and a professor at the U.S. Army War College, appeared before the Western Hemisphere subcommittee of the Foreign Affairs Committee for a hearing on the malicious influence of state and criminal actors in the Latin American nation’s ongoing breakdown.

“I would like to emphasize how both Russia and China, in the pursuit of their commercial and strategic interests in Venezuela, have provided capital, goods, services, and political backing that has indirectly enabled the populist regime to ignore and ultimately destroy the mechanisms of democratic accountability,” Ellis began his testimony.

Venezuela has been wracked by a social and economic crisis in recent years, driven in large part by clashes between the government of President Nicolás Maduro’s United Socialist Party of Venezuela (PSUV) and the opposition-controlled National Assembly. The struggle has seen the dissolution of the Parliament and the subsequent creation of a Constitutional Assembly in an election that U.S. Ambassador to the United Nations Nikki Haley called a “sham.” There have been numerous, bloody street protests, with more than 100 dead in connection with anti-government demonstrations. The Trump administration has sanctioned Venezuela and Maduro himself.

This political turmoil may be further exacerbated by the possibility of a credit default by PDVSA (Petróleos de Venezuela, S.A.), Venezuela’s state-owned petroleum firm. Venezuela has the largest oil reserves in the world, and the Venezuelan economy relies on oil for 95 percent of export revenues; PDVSA also provides substantial revenue to the current government. Rumors have circulated for months about a PDVSA default, which would plunge the government into a financial crisis that could result in the collapse of an already unsteady regime.

Amid the crisis, both Russia and China have established serious leverage over Venezuela. China, which Ellis ranks as the more involved of the pair, is now Venezuela’s principal banker, and has been since August 2014. Venezuela also stores a portion of its gold reserves in China. Additionally, China represents a “major source of credit” for Venezuela, Ellis said, to the tune of 62.2 billion dollars since 2005. Those loans are mostly repaid in shipments of oil.

“As the majority of international companies have withdrawn from Venezuela, the work performed by Chinese entities funded by such credit has become increasingly critical for building and maintaining the oil, electricity, and transportation infrastructure to get Venezuela’s oil to market,” Ellis explained. He noted that China had just handed another 2.7 billion dollars to Venezuela in the form of further infrastructure projects, including a new Chinese oil refinery.

China has also supplanted Russia as the top provider of arms to Venezuela, billions of dollars worth of deals extended mostly on credit.

Russia’s presence in Venezuela ranks below China’s, but is “significant” in Ellis’s estimation. It has sold over $11 billion in military hardware to Venezuela since 2006, and used Venezuela as a basis for military power projection in Latin America, including the deployment of several nuclear capable Tu-160 Backfire bombers there.

Russia is also tied up in Venezuela’s oil economy. Rosneft, a Russian state-owned oil company, has provided $17 billion dollars to PDVSA since 2008, including six billion dollars during the current liquidity crisis. In 2016, Rosneft traded $1.5 billion dollars in loans for a 49 percent stake in PDVSA subsidiary Citgo.

All of this assistance from Russia and China effectively shores up the stability of the Maduro regime, Ellis said.

Ellis said that neither Russia nor China is particularly opposed to the collapse of the Maduro regime, assuming that it would create a vacuum into which an even more anti-U.S., pro-Russia and China actor could enter.

“I believe that Russia and China as much as everyone else wants a transition away from the Maduro regime,” Ellis explained. “But what they want to transition to is very different. I believe that they are hoping they can get a transition to an equally anti-U.S. authoritarian regime that will let them legally legitimize their holdings.”

While their involvements in Venezuela may pose a political and military threat to the United States, Russia and China’s entanglement in the teetering Maduro regime also provides insight into the appropriate diplomatic and sanction strategy for the U.S. to adopt. Ellis was bullish on the prospect of further sanctions, targeted at PDVSA, which would severely challenge the government’s ability to continue to service the ballooning debt that China and Russia have used to keep it afloat.

“I actually believe that we are at a unique moment where, although oftentimes sanctions are not effective, sanctions may have a particular opportunity to be effective in this case, specifically because PDVSA is at the brink of a cascading liquidity crisis,” he said.

U.S. sanctions have forced the Maduro government to prioritize servicing its debt, as those sanctions have limited Venezuela’s ability to restructure, according to Bloomberg. However, Bloomberg estimates that the likelihood of a Venezuelan default over the next 12 months has declined from 65 to 61 percent.