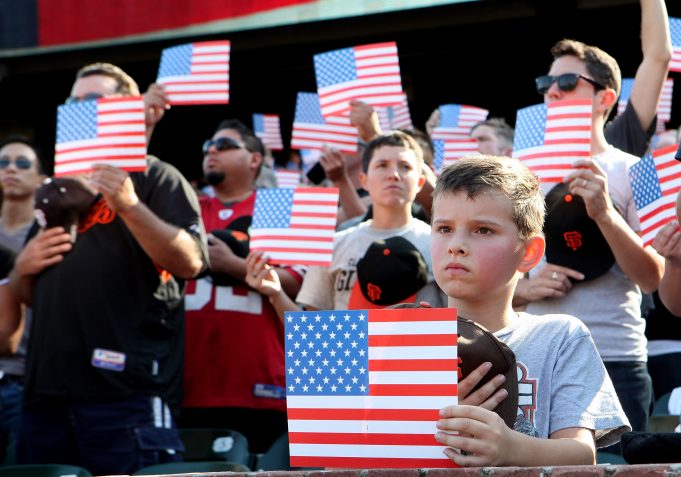 There are a lot of patriotic students at Vista Del Lago High School in Folsom, California. So you can imagine their shock when they were warned that chanting “USA” at sporting events and pep rallies could appear to be inappropriate and intolerant.

Television station CBS 13 in Sacramento reports that school leaders feared the chants could come across as intolerant and offensive to some.

“We can communicate an unintended message,” the school’s principal wrote in a letter to parents.

What would the unintended message be – that young people still love the red, white and blue – that they want to make America great again?

Folsom Cordova Unified Communications Director Daniel Thigpen told the television station they have not banned the chant. They just want young people to be more considerate when they chant.

The school’s principal suggested there are appropriate times to chant – like following the national anthem or the Pledge of Allegiance.

“I think it’s really sad that chanting USA in our country has even become a negative thing,” one parent told the television station.

The California Interscholastic Federation notified school districts across the state about concerns the “USA” chant might be used in a derogatory manner.

But that does not appear to be the case at Vista Del Lago High School.

“To say USA, you know, we’re all the same,” student Ryan Bernal told the television station. “We’re all American. It doesn’t matter what your skin tone is or where you’re from.”

That young man has more common sense that most of the grownups in charge of the school district.

It should be stressed that there’s never been a complaint about the “USA” chants – not one.

The only people expressing angst about public demonstrations of America pride are school staffers.

Perhaps the school district should be more concerned about the unintended message that sends.