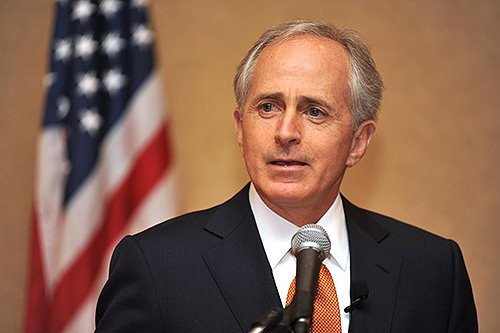 (CNSNews.com) — Senators Lindsey Graham (R-S.C.) and Bob Corker (R-Tenn.) expressed their strong disapproval of the newest batch of leaks from the White House during a Thursday press briefing on Capitol Hill, calling for the punishment and termination of the people responsible for the leaks and stressing that these people are “disloyal to our government.”

“I think it really is a disservice to the president that this happened,” Sen. Graham said, referencing the leaked transcripts of conversations between President Donald Trump and foreign leaders that were published by the Washington Post early Thursday.

“Can you imagine being president of the United States and having a conversation with a foreign leader and that conversation being divulged to the media?” said Graham.  “It’s just not fair to President Trump.”

Senator Corker, chairman of the Senate Foreign Relations Committee, went a step further, calling for the immediate termination of anyone who was involved in leaking of any kind.

“I have encouraged the president and now I encourage that to [Chief of Staff] General Kelly, to fire every single person that has had anything whatsoever to do with backbiting, undermining other people for their own benefit or leaking – and not to be cautious about it,” Corker said.

“If there was even a thought that somebody else was involved, get rid of them!” he said. “It is unseemly what is happening at the White House right now, or what has been happening.”

Corker then pointed the finger at the media, saying that the leakers are using the press to further their agenda.

“To have people there that are leaking information, that are talking to each of you, to try to have their public policy implemented because they are getting you to argue on their behalf,” said Corker.

“And we know what’s happening,” he said. “These people should be fired! They should be out of government! They are disloyal to our government! And I hope that’s what is going to happen.”