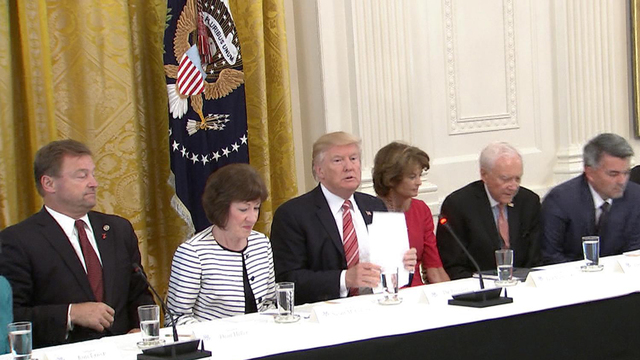 As Washington Post columnist George Will has written, the bill’s Medicaid provisions, as crafted by Sen. Pat Toomey, R-Pa., “makes it this century’s most significant domestic policy reform.”

Will is correct. Medicaid financing needs reform. Jointly financed by the federal government and the states, federal taxpayers pay between 50 and 75 percent of state Medicaid costs for the blind, elderly, and disabled, as well as women and children in poverty.

Obamacare created higher payment for a new class of beneficiaries: able-bodied recipients, mostly childless adults who can work. For them, federal taxpayers fund 95 percent today, and will pay 90 percent in 2020 and thereafter.

The Congressional Budget Office estimates that spending for these newly eligible recipients will account for 21 percent of total Medicaid spending in 2026.

Medicaid is an open-ended entitlement, meaning that if a state spends more, for whatever reason, bigger federal payments to the state are automatically increased.

Under current law, if a state spends $1 on Medicaid, it can get back $2 or even $3 in matching funds.

Not surprisingly, state officials have routinely tried to game the Medicaid program to secure higher Medicaid payments without spending more of their own money.

Dr. Gail Wilensky, former Medicare and Medicaid administrator, recalls, for example, the state practice of the “voluntary donation” scheme. A common strategy, Wilensky reports, would be for a state to get “’voluntary donations’ from hospitals to the state that the state would put up as its share of the match. After the federal matching money was received, the state would return the ‘donation’ to the hospitals, along with the additional federal money.”

Another scheme: the use of “provider taxes.” Says the Congressional Budget Office:

The Senate bill would end this process by replacing this open-ended federal payment to the states with a per capita cap, based on the average annual spending and the number of enrollees in the categories of Medicaid recipients served by the program.

With a per capita payment system based on multiple categories of beneficiaries, rather than a single overall spending cap, the Congressional Budget Office projects that the potential for overall budgetary savings would be greater.

Over the next seven years, Medicaid spending growth would be indexed by medical inflation (CPI-M) for most beneficiaries, with higher average annual spending increases (CPI-M plus 1 percent) for the elderly and disabled than current law.

Eight years from now, the annual spending growth for all beneficiaries would be indexed to general inflation (CPI-U).

A Medicaid per capita payment system promises multiple benefits for both taxpayers and recipients alike.

First, it would discourage state gaming to secure bigger infusions of federal cash.

As the Congressional Budget Office has concluded:

Federal spending caps … would curtail states’ current ability to increase federal Medicaid funds—an ability created by the open-ended nature of federal financing for the program—and could reduce the relatively high proportion of program costs now covered by the federal government.

Indeed, the gamesmanship—through, say, provider tax ploys to secure more federal dollars without an increase in state spending—would largely be undone. As the Congressional Budget Office reports, “Those incentives would be reduced under a capped program.”

By putting limits on the growth of annual federal payments, the states would be required to be more disciplined and responsible than they are today in the management of the giant program.

If state Medicaid spending exceeded the annual spending caps, state officials may find it necessary or desirable to increase state taxes to cover those additional costs, adopt measures to improve the efficiency of Medicaid care delivery—such as reimbursing Medicaid providers on payment schedules that reward performance, better care, or superior medical outcomes—or rethink their decision to add or maintain their coverage of the able-bodied Obamacare “expansion population.”

Under the Senate bill, of course, those persons would be eligible not only for premium tax credits for private insurance, but also for financial assistance with their out-of-pocket costs.

The Congressional Budget Office estimates that under the Senate bill, the adoption of the new per capita payment system (as well as a reduction in federal payment for the expansion population) would generate $772 billion over 10 years.

There are relatively few options to slow the growth in Medicaid spending. The most painful and politically difficult include the denial of eligibility, a reduction in the availability of medical services, or simply “meat-axe” cutting federal or state payments.

Instead, the Senate bill adopts a cap that would slow the growth of federal Medicaid payment over time.

The Senate approach—a per capita cap, based on the average spending and the number of enrollees—accounts for the wide differences among the population groups served by the Medicaid program.

The Senate bill also gradually phases down federal funding for able-bodied adults who became Medicaid-eligible under Obamacare, but wisely provides these enrollees with an expanded premium tax credit for the purchase of private insurance, and financial assistance from a state stability fund that can help them with their out-of-pocket costs.

The Senate bill embodies sound, rational, and responsible Medicaid policy. If enacted, it could be the greatest single entitlement reform in a generation.