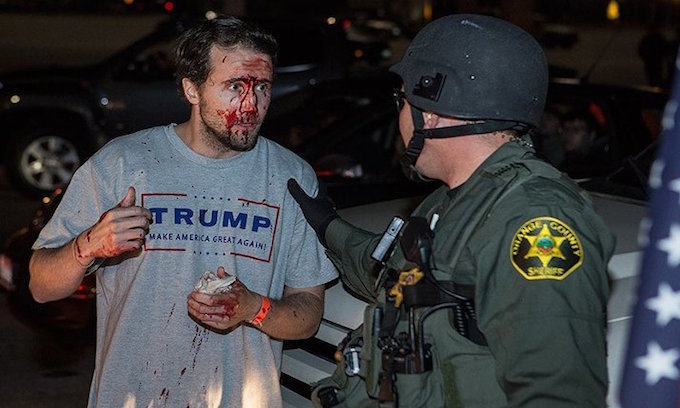 Since Donald Trump’s election win in 2016, his supporters and the political right in general have repeatedly been targeted for violence and intimidation.

Indeed, many anti-Trump attacks have had a racial component to them.

In January 2017, a shocking video emerged from Chicago, when a young mentally disabled white male was kidnapped by a group of black assailants. The victim was tied up, tortured, sliced with a knife, and forced to drink toilet water while they yelled, “Fuck Donald Trump!” and “Fuck white people!”

According to a later interview with the victim, the crime had a racial component. According to Wilcox, the attackers, all black, attacked the man after saying “Yeah that’s one of those white boy Trump supporters.”

Wilcox did in fact vote for Trump, but he said the attackers would have no way of knowing that. He was simply attacking him for being perceived as a Trump voter due to his race. (RELATED: Man Robbed And Beaten By Trump Haters Speaks Out)

Meanwhile, attacks against all conservatives and Republican politicians have seen a worrying rise.

Recently, Republican Sen. Rand Paul was attacked at his home by a neighbor. A motive for the attack is not currently known, but prosecutors are now looking at bringing federal charges against the attacker, a sign the attack could have been political.

According to other neighbors, the attacker was known for being an avowed socialist and engaging others in political arguments.

A gruesome example of anti-Republican violence occurred in June, when a baseball practice of GOP congressmen was shot up by James Hodgkinson, an anti-Trump Bernie Sanders fan.

Hodgkinson, who called Trump a “traitor” and Republicans the “Taliban of the USA,” critically wounded Republican Rep. Steve Scalise of Louisiana. He also shot several others at the baseball field, injuring five.

After local Republicans were threatened, in April in Portland, Ore., a parade was canceled.

And in June in Indiana, a black male suspect shot at a man driving a truck with a “Make America Great Again” flag on a highway.

Incidents of violence from “antifascist” Antifa have broken into the mainstream political discussion, with President Trump even calling them out by name in August.

On Inauguration Day in Washington, D.C., Antifa and took to the streets and rioted in a “Black Bloc,” breaking windows, violently attacking Trump supporters, and setting a limousine on fire. The riot lead to over 200 arrests.

On the same day, an anti-Trump protester tried lighting a Trump supporting girl’s hair on fire. A Trump fan was also punched in the head and violently attacked on Inauguration Day for putting out a fire.

Outside of planned protests, has also repeatedly attacked right-wingers in various incidents.

At an airport protest in January in Portland, Oregon, a Trump supporter was violently attacked and knocked out by anti-Trump protesters. In May, a former professor was arrested for brutally bludgeoning a young Trump supporter in the head with a bike lock as part of an Antifa mob. In late August, Antifa again violently targeted a peaceful right-wing protest.

An elementary school student in Stafford, Texas was badly beaten up by his classmates for voting for Donald Trump in a school’s mock election

In another incident, a high school student in Rockville, Maryland was attacked for wearing a “Make America Great Again” hat. In Redwood City, Calif., a female high school student was brutally beaten for supporting Trump because her classmates thought it meant she hated Mexicans.

Another high school student punched a classmate for holding a Trump sign. When he was taken to the office for his attack, he reportedly threatened, “When I see that white boy again, I’m going to punch him in his face.” And in Meriden, Conn., a man holding a Trump sign after the election was attacked on a traffic island by two men. At Rutgers University, a man wearing a “Make America Great Again” hat was attacked by a man in a Black Panthers cap.

There are countless other examples of individual Trump supporters being violently targeted.

Left-wing violence in America has a long and storied past, and conservatives aren’t the only ones worried about rising political violence from the left. Following the shooting of Steve Scalise, NPR ran a segment asking, “FACT CHECK: Is Left-Wing Violence Rising?,” concluding that a full-on trend towards violence isn’t necessarily afoot, but that “[d]omestic terrorism experts say that concern is only heightened by the fact that the line between what’s considered mainstream and what’s considered fringe is becoming increasingly blurred.”

Vanity Fair also asked, “Is The Left Also To Blame For Political Violence?” in the wake of the GOP baseball shooting.

The mainstream news media hasn’t done much to quell the rising tide of anti-conservative violence, and in many cases, has fanned the flames of tension.

CNN in particular has whitewashed Antifa violence, especially after the August clashes between white nationalist protesters and Antifa in Charlottesville, Va.

Don Lemon stated that although the tactics of the violent Antifa “weren’t exactly right,” they were simply “protesting hate in America.”

Meanwhile, CNN host Kamau Bell actually spoke at an Antifa rally to say, “when the Nazis leave, as they have left…you have to stand up for the brown people, the black people, the LGBT people, the immigrants–everybody everyday!”

Sara Sidner, a CNN correspondent, also defended Antifa violence, saying, “their idea is, ‘look, non-violence hasn’t worked, we are going to try to stop this.’”

CNN.com reported on Antifa by saying that the groups “[seek] peace through violence.”

NBC News ran an article recently that questioned whether Antifa violence was actually “ethical.” MSNBC’s Nicolle Wallace also said that violent Antifa were “good people” on “the side of angels.”

Reuters also referred to anti-Trump protesters, a group which has often been violent as “peace activists.”