Well, it’s November, which means the season of familial discord is fast approaching.

As you know, this year has offered a wealth of potential topics of conversation that are sure to trigger a third coronary event for your Uncle Lou.

So you probably don’t need any help infuriating your more conservative relatives, but just in case you need a hand, Snoop D-O-double-G is happy to assist: 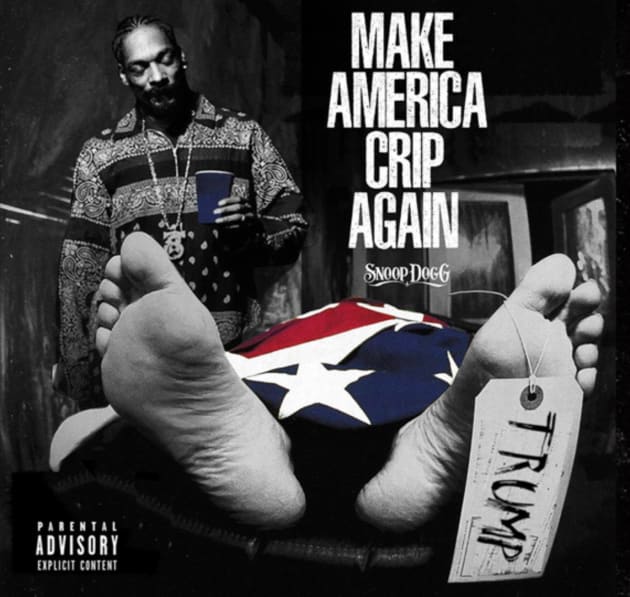 As you can see, the photo isn’t exactly subtle in its anti-Trump sentiment.

Paying homage to Ice Cube’s 1991 album Death Certificate, Snoop is seen sipping from a Crip-blue Solo cup glaring down at the corpse of the Donald.

It’s not the rapper’s first political controversy this year, as back in March, a video in which Snoop pretends to assassinate Trump made major waves on social media.

Needless to say, lots of folks on Twitter have been thoroughly butthurt by Snoop’s brand of satire, but most of them have Pepe the Frog avatars, and thus, their opinions aren’t to be taken seriously.

“HOW DOES THIS PRICK get away with this crap?” tweeted a guy who we probably don’t need to tell you has a photo of a very angry-looking bald eagle as his profile pic.

For his part, Snoop has yet to sound off on the controversy.

And thankfully, against all odds, the president hasn’t tweeted about either.

Of course, Trump has a lot on his plate these days, so he might be a bit distracted at the moment.