Evergreen State College in Washington, is a perfect example of the issues we face today and were created by the same individuals supporting movements, like “resistance summer.” Protesters at Washington State College are calling for “a day without white people” because they do not feel safe and feel they have been vilified by conservative media.

The campus seems to be falling apart after emails from a professor were leaked and showed his lack of support for the event that wanted white people to leave the campus for the day. The professor said it was “an act of oppression in and of itself” and he would go to campus either way. 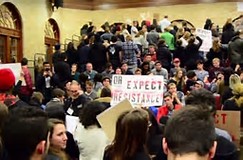 An event like this does not help the situation and would build tensions between students. Student videos have been released, which demand for the professor to be fired because he’s “racist.” Not sure how they can claim he is racist when they are the ones that want to keep white people off campus for a day. The situation has escalated to the point that chief of police had to tell the professor that it is not safe for him to be on campus.

The videos of protest on YouTube and ones picked up be conservative media outlets are said to be “stolen and edited.” The student group is claiming that they have been stole by white supremacist and edited to expose and ridicule the students.” The student groups claim of editing done be conservative media is their attempt to blame someone for their actions. At this point, they might as well blame the Russians.

They are demanding that the video is taken down by Friday, which does not matter since it has been put on YouTube and is being spread across the web. The video needs to stay online and been seen by everyone to expose the ridiculousness that is happening on college campuses. A day without white people on campus should not even been taken in consideration by the administration.

Protesting for a day without white kids on campus because students feel they have been “vilified” by conservative media is ridiculous. The only case of racism that occurred here was done by the students who protested for a day without white people. The students at Washington State University need to grow up and resolve issues like an educated adult. Protesting and rioting to the point that the police chief must tell a professor he should stay of campus for his safety should never happen and the school’s administration needs to end this stunt before it goes any farther. 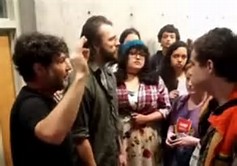 These students are part of the future of the country. Allowing them to cry until they get what they want, is not acceptable, in any way. The protest for a “day without white people” and their demands for a professor to be fired because he wouldn’t support it, is part of a deep issue we will face with Millennials. The Millennial generation is soft and expects everything to be given to them. Of course, this is a generalization of a large group and there are many Millennials that are preparing to be a future leader. Millennials who are behind stunts like these are in desperate need of a wake-up call.

When professors must be told to stay of campus for their safety and groups want white people to leave for the day, our country is in trouble. Evergreen State College is only one of the ridiculous protest that occur on campuses, every year. It will not be surprising to see more of these protest, as the anti-Trump brainwashing floods the snowflake students, on campuses across the country. The resistance movements will likely create a flood of protest when students return to campus in the fall.

Here are YouTube links to videos of the protest.