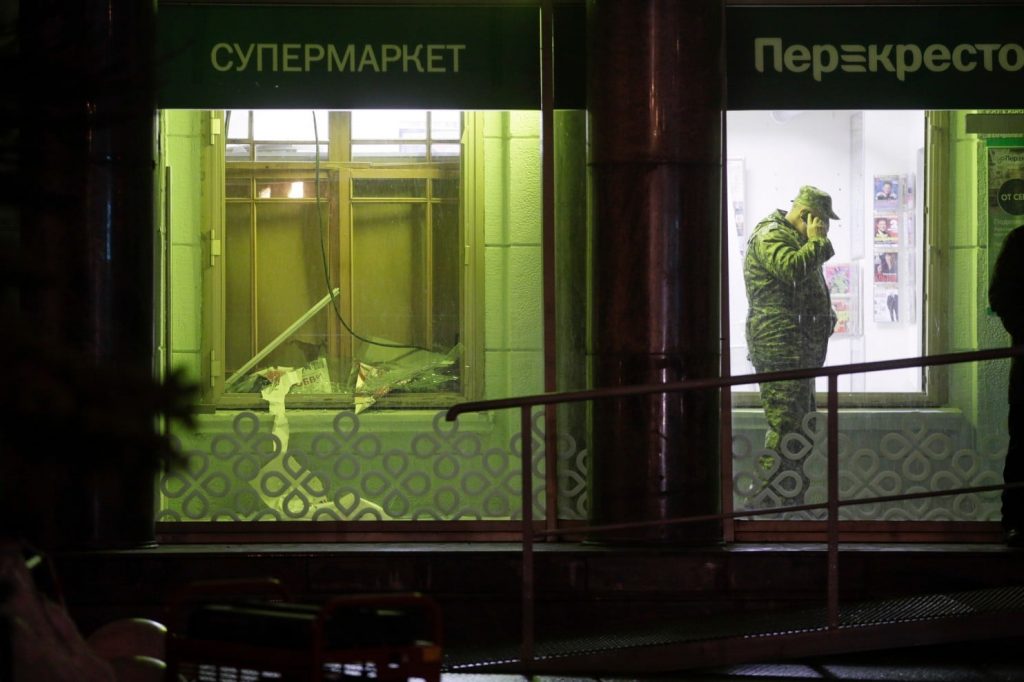 ‘Tis the season for Jihad.

A Christmas season bombing of a supermarket in Russia’s second-largest city suggests that killing in the name of Islam never goes out of season.

In addition to being a time for end-of-the-year reflection, Christmas is also a popular time for Muslim terrorists to kill Christians and Jews, and sometimes, other Muslims, too.

Yuletide terrorist attacks seem to be becoming the new normal in several countries – and the Christmas season isn’t over yet in Russia. Eastern Orthodox Christians in Russia won’t celebrate the birth of Jesus of Nazareth until Sunday, Jan. 7, more than a week from now.

No one has yet claimed responsibility for the Wednesday evening bombing in Saint Petersburg that sent 10 people to the hospital, but Islamists are thought to have figured in a suicide bombing in the city’s subway system that left more than a dozen dead and 50 wounded in April.

The explosion took place at the Perekrestok market. At that time, thousands of people were present in the shopping complex housing the market. The source of the blast was a homemade bomb packed with shrapnel. The bomb had reportedly been concealed in a locker.

The bombing comes after Russian President Vladimir Putin called President Donald Trump earlier in the month to thank him for a CIA tip that helped head off bombings that Islamic State had planned for the city.

On Dec. 21 a 32-year-old Muslim man named Saeed Noori drove his car into a crowd of people in Melbourne, Australia, injuring 19, three of them critically, according to reports. The Australian citizen entered that country in 2004 as a refugee from Afghanistan.

Authorities say Noori has no known links to extremist groups but told investigators he thought Muslims were being mistreated. “The motivation for the attack outside Melbourne’s main train station during the hectic pre-Christmas shopping period could have big implications for a country long nervous about refugees, especially from the Middle East,” the Washington Post opines.

On Dec. 22, Ahmed Aminamin El-Mofty, 51, was shot and killed by police in Harrisburg, the capital of Pennsylvania, after he took shots at cops throughout that city. The perpetrator shot and wounded at least one state trooper. The U.S Department of Homeland Security has labeled the incident targeting Pennsylvania police a “terror attack.”

On the morning of Dec. 11, a homemade bomb prematurely exploded on the body of would-be Muslim suicide bomber Akayed Ullah, 27, in a subway passageway between Times Square and the Port Authority, a massive bus terminal, in Manhattan. Several bystanders were injured but their wounds were not deemed life-threatening. Ullah survived and is in custody.

Islamic State supporter Everitt Aaron Jameson, 26, of Modesto, California, was taken alive by authorities Dec. 20 for planning a Christmas Day bomb attack on tourist-heavy Pier 39 in San Francisco. Jameson, who adopted the name Abdallah abu Everitt ibn Gordon al-Amriki, reportedly did this to get back at President Trump for recognizing Jerusalem as Israel’s capital. In what authorities described as a suicide note, Jameson complained, “You’ve allowed Donald J Trump to give away Al Quds [Jerusalem] to the Jews.”

President Trump signed Presidential Proclamation 9683 on Dec. 6 by which the U.S. officially recognized Jerusalem as the capital of the State of Israel and committed the U.S. to move its embassy from Tel Aviv to Jerusalem “as soon as practicable.”

Why Jameson, a former U.S. Marine Corps trainee booted out for failing to disclose his asthma, would think he was hurting Christians by bombing San Francisco, more or less Ground Zero for leftism and secularism in America, is unclear. He must have been indiscriminately seeking publicity for the jihadist cause, so any American or non-American corpse would do.

According to FBI Special Agent Christopher McKinney, Jameson chose Pier 39 as his venue because he “knew it was a heavily crowded area,” and Christmas because it was “the perfect day” to commit the attack.

Jameson said the U.S. needed “another attack like New York or San Bernardino,” involving vehicles and firearms, a reference to the Halloween truck attack in a Manhattan park that left eight dead and the 2015 attack on a government building in California that left 14 dead, McKinney said.

Jameson also reportedly said he had no need for “an escape plan because he was ready to die.”

“I’m glad to know we Muslims are finally hitting back,” Jameson reportedly told an informant.