WASHINGTON, D.C. — Thirty-eight percent of U.S. adults say the threat of terrorism makes them less willing to attend events where there are thousands of people. This is up from 27% in July 2011, the last time Gallup asked the question. It is also the highest level recorded since Gallup began asking the question after 9/11. 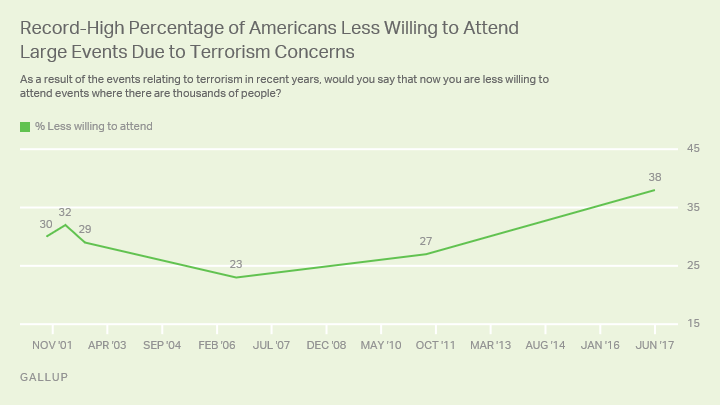 The record-high percentage of Americans avoiding large events comes on the heels of the May 22 terrorist attack on concertgoers in Manchester, England, and the June 3 attack at a crowded bridge and restaurants in London.

Immediately after 9/11, 30% of Americans expressed reluctance to attend crowded events. That level of concern persisted throughout the first year after those attacks but dipped in polls conducted five years and 10 years later — to 23% and 27%, respectively. But with the recent events in England fresh in people’s minds, concern about attending crowded events is at a new high. Memories of other terrorist attacks on U.S. soil, including the 2013 Boston Marathon bombing and the 2016 shooting at the crowded Pulse nightclub in Orlando, Florida, also may be increasing Americans’ fears.

Since 9/11, Gallup periodically has asked Americans about their willingness to venture into four public situations in light of concerns that they may have about terrorism. In addition to attending events where there are thousands of people, the situations are traveling overseas, flying on airplanes and going into skyscrapers.

Americans’ reluctance to participate in the last three activities is not at a record high, but it is heightened compared with Gallup’s measures in 2011.

Forty-six percent of U.S. adults say they are less willing to travel overseas, up eight percentage points since 2011.

Twenty-six percent say they are less willing to go into skyscrapers as a result of events relating to terrorism in recent years; this is the highest percentage recorded since September 2002. 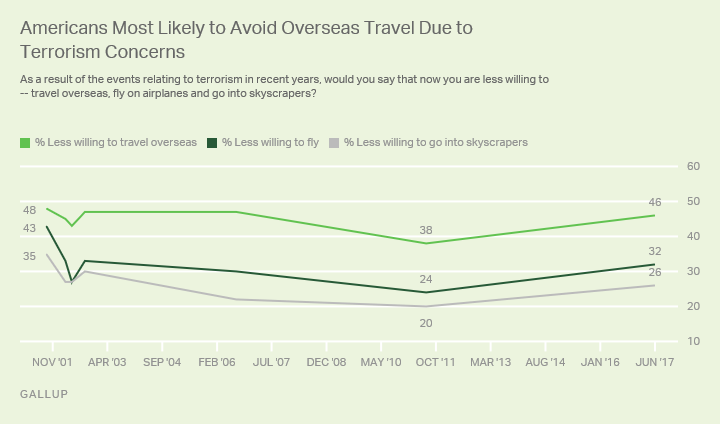 It is unclear to what extent Americans’ reluctance to engage in these activities is influenced by their likelihood of doing them in the first place. For example, although 48% say they are less likely to travel overseas, the number of Americans who were actually planning to do so to begin with is unknown. Thus, these results may overstate how many people actually have modified their behavior because of terrorism concerns.

Americans’ Worry About Terrorist Attacks up Since 2011

Sixty percent of Americans believe it is very or somewhat likely that a terrorist attack will occur in the United States within the next several weeks. This is up sharply from 38% in August 2011 and 45% in June 2015.

At the same time, just slightly more Americans today (42%) than in 2011 (38%) say they are very or somewhat worried that they or a family member will be a victim of terrorism. This percentage is down from 51% in 2015.

Recent terrorist attacks at crowded locations in London and Manchester may be affecting Americans’ willingness to engage in certain public activities. These events may explain the 11-point increase since 2011 in the percentage of Americans who are less willing to attend events with large crowds of people.

Americans largely trust in the government’s ability to protect them from terrorism, with seven in 10 saying they have a great deal or fair amount of confidence in authorities to do so. Therefore, a strong public security presence at large events may serve to calm Americans’ fears of potential attacks at these locations and decrease Americans’ desire to avoid them over time. However, should additional attacks occur at events in the U.S. or Europe, anxiety may rise and keep Americans away from crowded events.