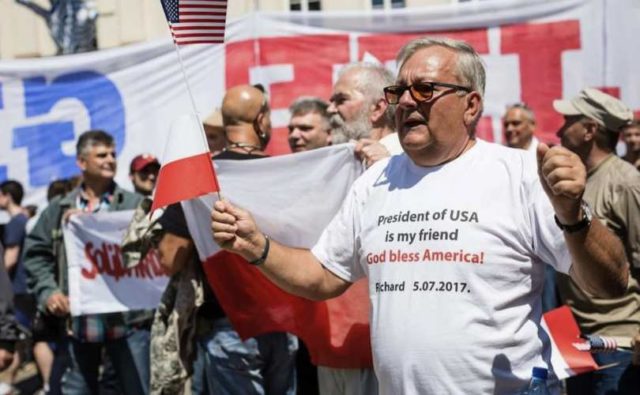 Last week, The Atlantic rendered a great service to those of us who contend that America is in the midst of a civil war between the right and the left.

It provided a smoking gun—actually, the gunshot itself—to those of us who contend that the left (never to be confused with liberals) is intent on dismantling Western civilization.

It published articles by two left-wing writers, one by Peter Beinart titled “The Racial and Religious Paranoia of Trump’s Warsaw Speech,” and one by its national correspondent, James Fallows, written on the same theme as Beinart’s.

The subject of both articles was President Donald Trump’s speech in Warsaw, Poland, last week, a speech described by The Wall Street Journal as “a determined and affirmative defense of the Western tradition.”

Yet, to The Atlantic writers, defending Western civilization is nothing more than a defense of white racism.

Beinart begins his piece saying: “In his speech in Poland on Thursday, Donald Trump referred 10 times to ‘the West’ and five times to ‘our civilization.’ His white nationalist supporters will understand exactly what he means. It’s important that other Americans do, too.”

And Fallows begins saying, “what he called ‘civilization’ … boils down to ties of ethnicity and blood.”

Is there one liberal or conservative American who thinks that the words “the West” and “Western civilization” mean a celebration of white-blood purity?

What we have here are two vital lessons.

One is that leftism is the primary racist ideology of our time, seeing everything in terms of race, whereas mainstream liberalism and conservatism advocate a race-blind society as manifest in Martin Luther King Jr.’s famous “content of his character” line. The left disdains this view.

To cite one of innumerable examples, the University of California has published a list of biased “microaggression” statements students and faculty are to avoid. One of them is “There is only one race, the human race.”

In other words, the left, which controls our universities, teaches American students that it is wrong to believe in one human race. That was precisely what the Nazis taught German students.

And now, we have another expression of this doctrine enunciated in the pages of The Atlantic: that those who wish to protect or save Western civilization are talking about saving the white race.

I am merely stating an unassailable truth: No significant political movement since the Nazis has “honored” race or equated Western civilization with race, as Beinart and Fallows do.

Those of us who have long equated the left with opposition to Western civilization are vindicated.

We didn’t need Beinart and Fallows—we already had innumerable examples, such as the University of Pennsylvania English Department removing its longstanding poster of William Shakespeare because he was a white male—but in their explicit articulation of the left’s view, they are immensely helpful.

Shakespeare is read in every language that has an alphabet not because he was white or European but because he is regarded as the greatest playwright who ever lived.

But the leftists who run that English Department place race (and gender) above excellence—a thorough rejection of Western values.

Ironically, outside of liberals and conservatives, those most likely to celebrate Western values are likely to not be Western.

The Japanese would scoff at the idea that Bach and Beethoven did not write the greatest music ever composed. That is why some of the greatest Bach recordings of our time come from Japanese musicians living in Japan.

Nor would the Japanese deny that their modern country’s democratic values come from the West.

The West’s disdain for its own values seems to be getting increasingly strident with each passing day. Trump is making an important and laudable effort to reverse this trend. He’s walking in good company.

In an address to the Pan-American Scientific Congress in Washington, D.C., on May 10, 1940, then-President Franklin D. Roosevelt said, “Americans might have to become the guardian of Western culture, the protector of Christian civilization.”

FDR frequently spoke about protecting both Western and Christian civilization.

We owe a debt of gratitude to The Atlantic, CNN (whose senior White House correspondent, Jeff Zeleny, described Trump’s address as a “white America, America first kind of speech”), and others.

They have made it clear that the left has contempt for Western civilization and therefore constitutes the greatest threat to its survival.