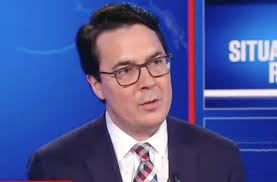 The New Yorker magazine fired one of its star reporters Monday, ending after he spent a decade writing for the storied journal of culture and politics.

Here is the statement from the magazine:

The New Yorker recently learned that Ryan Lizza engaged in what we believe was improper sexual conduct. We have reviewed the matter and, as a result, have severed ties with Lizza. Due to a request for privacy, we are not commenting further.

I am dismayed that The New Yorker has decided to characterize a respectful relationship with a woman I dated as somehow inappropriate. The New Yorker was unable to cite a company policy that was violated. I am sorry to my friends, workplace colleagues, and loved ones for any embarrassment this episode may have caused. I love The New Yorker, my home for the last decade, and I have the highest regard for the people who work there. But this decision, which was made hastily and without a full investigation of the relevant facts, was a terrible mistake.

The reporter was married from 2004 to 2015 to Dr. Christina I. Gillespie, who is a family physician in the Washington-area.

It was Lizza who triggered the end of the 10-day tenure of White House Communications Director Anthony Scaramucci, when he posted his version of a late-night unsolicited phone call from the former money manager: “Anthony Scaramucci Called Me to Unload About White House Leakers, Reince Priebus, and Steve Bannon.”

Scaramucci also told me that, unlike other senior officials, he had no interest in media attention. “I’m not Steve Bannon, I’m not trying to suck my own cock,” he said, speaking of Trump’s chief strategist. “I’m not trying to build my own brand off the fucking strength of the President. I’m here to serve the country.” (Bannon declined to comment.)

He reiterated that Priebus would resign soon, and he noted that he told Trump that he expected Priebus to launch a campaign against him. “He didn’t get the hint that I was reporting directly to the President,” he said. “And I said to the President here are the four or five things that he will do to me.” His list of allegations included leaking the Hannity dinner and the details from his financial-disclosure form.

I got the sense that Scaramucci’s campaign against leakers flows from his intense loyalty to Trump. Unlike other Trump advisers, I’ve never heard him say a bad word about the President. “What I want to do is I want to fucking kill all the leakers and I want to get the President’s agenda on track so we can succeed for the American people,” he told me.

CNN, where Lizza is an on-air contributor said: “We have just learned of the New Yorker‘s decision. Ryan Lizza will not appear on CNN while we look into this matter.”