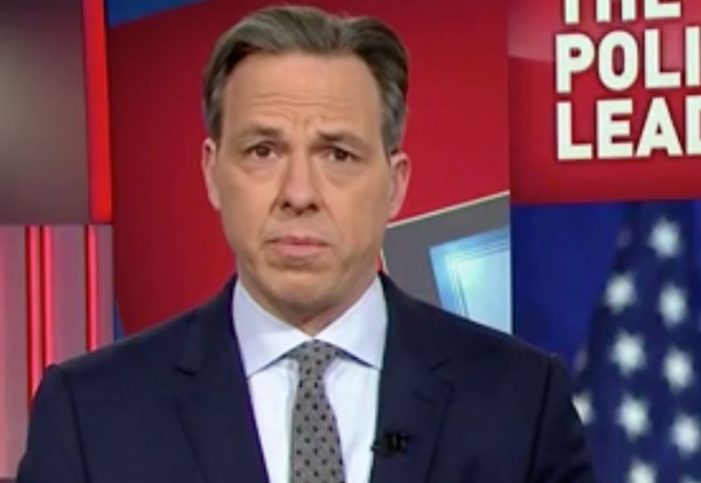 While those of us who once admired CNN’s Jake Tapper as a rarity in the mainstream media — an honest and objective journalist, have been shocked by his transformation into a dishonest, sanctimonious, left-wing virtue-signaler, we assumed his lying and peacocking was in pursuit of the applause and fame he so transparently craves.

His laughably bad ratings, though, appear to show that like most people who sell their soul, Tapper was tricked by the Devil.

To be fair to Tapper, CNN’s transition into a hard-left social justice network, something Breitbart News was the first to document and warn about nearly five years ago, has dragged the entire network down, from second place behind Fox News, into last place behind MSNBC.

Reputation-wise, CNN is now a laughingstock, an embattled fake news factory rocked by endless scandals in its desperate pursuit of President Trump, and the hideous cause of further-empowering the federal government.

Nevertheless, Tapper’s failure is a unique case, primarily because he was once universally respected by those on the left and right. After George Stephanopoulos stole all of Tapper’s dreams at ABC News, it was assumed those dreams would finally come true at CNN.

Unfortunately, though, after four years at CNN, not only is Tapper’s reputation in tatters, not only has he been caught telling lie after lie after lie; smear after smear after smear, not only is he still stuck with the four p.m. hour — still CNN chief Jeff Zucker’s puppet and step-child to, of all people, Wolf Blitzer and Don Lemon — but in the ratings race, Tapper’s anemic total viewer numbers regularly land him in last place behind MSNBC. Which begs the question…

How awful and unappealing of a news anchor does one have to be in order to regularly attract fewer viewers than … Nicole Wallace?

For example, as big of a news week as last week was, there was only one day where Tapper managed to squeak over a million viewers. But every day last week he lost handily to Wallace. Meanwhile, over at Fox News, Neil Cavuto usually doubles Tapper’s pathetic viewership.

In the 25-54 age demo, which only affects advertising rates and has nothing to do with influencing public opinion — something very important to an imperious scold like Tapper — there was a time when Cavuto was losing to Tapper. Now Cavuto trounces Tapper, who has at least managed, for now, to squeak ahead of Wallace in the demo.

What has to be especially dispiriting for Tapper is that his ratings slide has coincided with his unrelenting quest for celebrity status though regular appearances with his smug Late Night counterparts — Seth Meyers, Jimmy Kimmel, and Stephen Colbert. All that publicity has at best come to nothing, has at worst backfired.

The reasons for Tapper’s failure are obvious. Over the last couple of years, #JakeSoWoke (as Ace of Spades perfectly dubbed him) has become untrustworthy; a McCarthyite red-baiter, a phony,  and his unquenchable sanctimony and self-righteousness has made him as unappealing as a blow-dried tele-evangelist. Outside of the bubble, he is seen as a ridiculous figure always making himself the hero of his own story.

In the minds of most of us, Tapper never recovered from the moment he badgered then-candidate Trump with 23 follow-ups to the same question (which is fine), but then, on the same day, challenged then-candidate Hillary Clinton with zero follow-up questions.