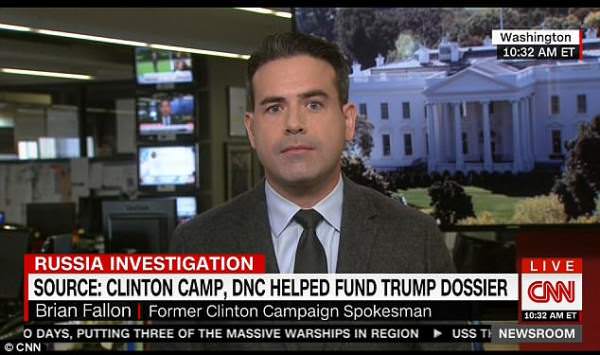 A nervous Fallon claims he doesn’t know how much Clinton knew about the document’s funding.

CNN’S POPPY HARLOW: “Just to be clear, Brian, you have said previously in the last 24 hours you don’t believe Hillary Clinton knew about this? Is that right?”

HILLARY SPOX BRIAN FALLON: ““Oh, I don’t know, I haven’t asked, I haven’t spoken to her.”

CNN’S POPPY HARLOW: “You don’t know .. okay, thank you for clarifying. Shouldn’t she know, shouldn’t you, someone so high up in the campaign be informed of this?”

HILLARY SPOX BRIAN FALLON: “Well, I mean, she may have known, but the degree of exactly what she knew is, is, is beyond my knowledge….going out and finding Fusion GPS, finding Christopher Steele, I mean, she may or may not of been aware of that level of detail, I don’t know, ”

On Tuesday evening, reports revealed the FBI under James Comey agreed to reimburse the Clinton campaign and DNC for money it spent on the opposition research. It is highly plausible FBI documents will reveal the degree to which Hillary Clinton may or may not have known about funding the ‘Trump Dossier.’ According to House Speaker Paul Ryan (R-WI), the FBI has now agreed to comply with a request to hand over all dossier-related documents. According to CBS News, Hillary Clinton only learned about the ‘Trump Dosser,’ following BuzzFeed’s report on the now discredited documents.