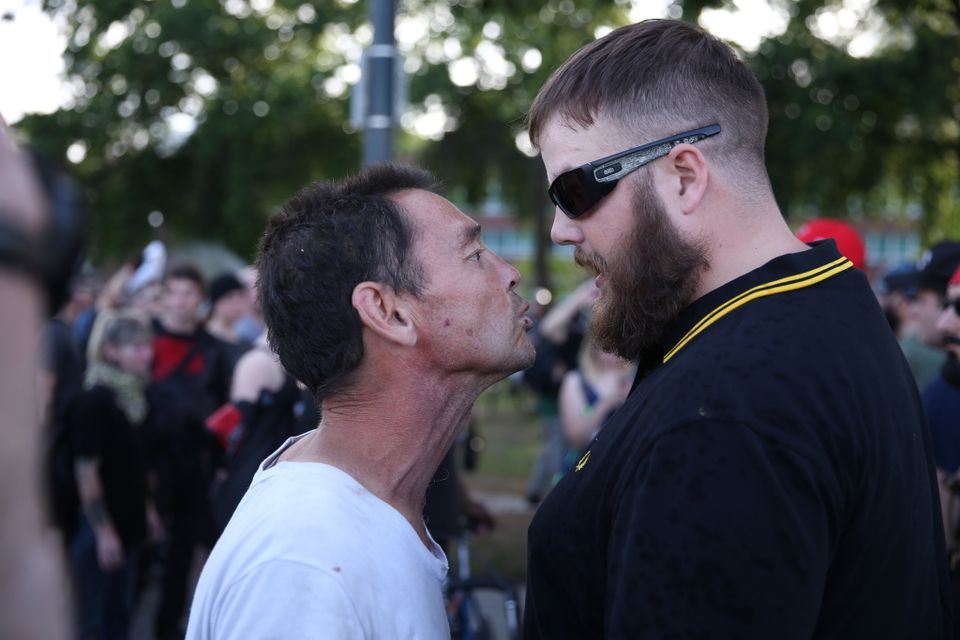 A mob of anti-fascist agitators attacked about 150 Trump supporters who gathered in downtown Portland Sunday for a Patriot Prayer rally designed to promote free speech.

The pro-Trump crowd waived American flags and donned Make America Great Again caps to kick off the Patriot Prayer around 2 p.m. Sunday and were immediately faced with dozens of Antifa thugs who covered their faces and attacked with skateboards and pepper spray, Blue Lives Matter reports.

Dude got bloodied up in the last brawl, it's on my last periscope. Super intense footage pic.twitter.com/yQ8ObAWFDr

Joey Gibson, an organizer for the Patriot Prayer, told The Oregonian the Sunday march was aimed at promoting “freedom and tolerance for people who think differently” but the Antifa crowd wasn’t interested in either.

The masked agitators chanted “No Trump, no KKK, no fascist USA” and accused Trump supporters of being “white supremacists” as Gibson attempted to address the patriots with a megaphone.

According to The Oregonian:

In stark contrast to recent protests, where Portland riot police formed a virtual wall separating protesters from each other, the police presence was minimal. Reporters spotted one police officer standing nearby shortly after the protests began, and a van of police officers in riot gear was spotted several blocks away on stand-by.

In videos posted by various media on Twitter, no police appeared near the fighting that had broken out.

Numerous fights broke out between the groups, and several individuals on both sides doused eachother with pepper spray.

Journalist Mike Bivins reported on Twitter that at least one Antifa protester was whacking folks with a skateboard.

Standstill at the fountain as some antifascists chant "go home Nazis." pic.twitter.com/qsm6yfdoXR

And as some of the Antifa crowd physically attacked their political foes, others took to torching American flags to instigate further conflicts with the patriots, according to Blue Lives Matter, which published numerous video of the violence and destruction.

Several folks on both sides of the brawl suffered injuries and several were arrested, despite police warning over loudspeakers to “stop any and all illegal activity at Waterfront Park.”

“Police arrested a 16-year-old male for disorderly conduct in the second degree, as well as a felony probation warrant for burglary,” The Oregonian reports. “The juvenile was booked into a detention home.

“Police also arrested Jonny Perez, 24, and Tusitala Toese, 21, both on charges of disorderly conduct in the second degree. Perez was taken to the Multnomah County Jail and will be arraigned on Monday. Toese was issued a criminal citation instead of being booked into jail due to an injury from the protest that required treatment at a hospital.”

Tiny got his face bloodied pic.twitter.com/FzV51SrBay

Around 3 p.m. the Patriot Prayer group marched around downtown as the Antifa crowd followed them around and attempted to instigate conflicts.

The groups exchanged chants of “USA! USA!” and “Go Home Nazis,” according to the news site.

By 4 p.m., the groups returned to Waterfornt Park where they continued to shout at each other.

By 5 p.m., the event was largely concluded, though some stayed behind to continue the conflict.

“I’m a little bit shocked,” Bay Area parent Sabrina Schroader told The Oregonian as her children played in the fountain on Salmon Street. “I didn’t know there would be so many Trump supporters in Portland.”