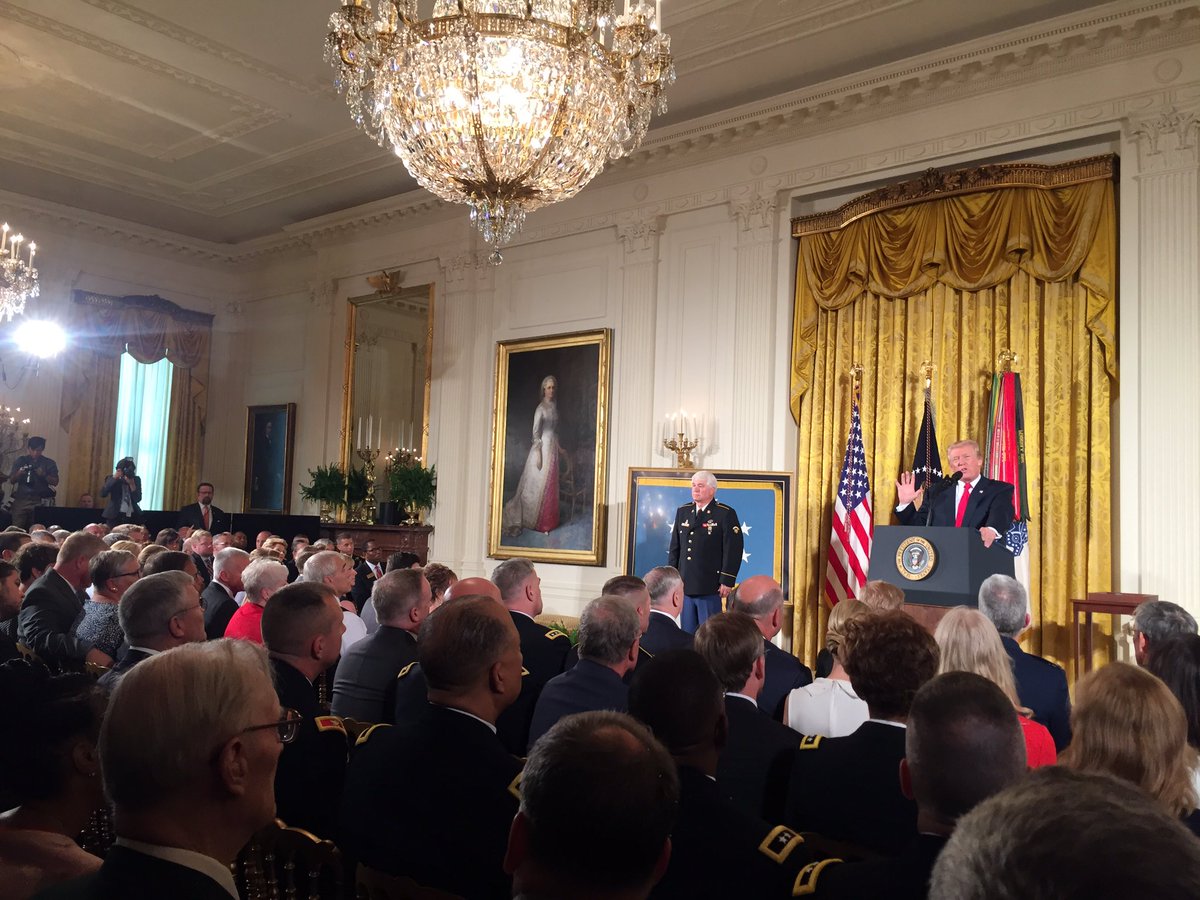 Trump recounted the 48 hours that “hero” McCloughan endured that merited issuing him the highest military honor. In the audience were eight previous Medal of Honor recipients.

For 48 hours on May 13 to 15, 1969, McCloughan was engaged in “close-combat fighting against enemy forces near Don Que, Vietnam” according to the White House. “McCloughan was serving with Company C, 3rd Battalion, 21st Infantry Regiment, 196th Infantry Brigade, Americal Division, as a private first class combat medic.”

Trump detailed the honorable actions of McCloughan, who joined a mission to advance toward the enemy and as he cared for two soldiers, shrapnel slashed him open. The terrible injuries McCloughan endured did not stop him from continuing his work and coming to the aid of yet another.

Trump went on to describe when McCloughan refused to be evacuated, “As Jim now says, I would have rather died on the battlefield than know that men died because they did not have a medic.” McCloughan went nearly two days with “no food, no water and no rest,” and volunteered to hold a blinking signal in an open field for a supply drop.

“He would not yield, he would not rest, he would not stop and he would not flinch in the face of sure death and definite danger,” said Trump. “It was as if the strength and pride of our whole nation was beating inside of Jim’s heart.”

McCloughan rescued 10 soldiers and came to the service of “countless others” in those 48 hours. “He was one of 32 men who fought until the end. They held their ground against more than 2,000 enemy troops,” said Trump. “We are in awe of your actions and your bravery.”

President Trump of Medal of Honor recipient, Vietnam War medic Jim McCloughan, "We are in awe of your actions and your bravery" pic.twitter.com/OHUV85jksY

The President told the story of McCloughan praying to God from the battlefield, “If you get me out of this hell on earth, so I can tell my dad I love him, I’ll be the best coach and the best father You could ever ask for.” McCloughan had a great peace come over him as he prayed, Trump relayed to the crowd.

McCloughan told his dad that he loved him upon his return home.

Present at the ceremony were ten men who fought alongside McCloughan, five of which he had saved on the battlefield. Trump thanked them for their service and asked them to stand after calling out their first names.

Trump spoke of the brave men and women in uniform who have “overcome tyranny, fascism, communism…every single threat, they’ve overcome.”

“We’ve overcome these threats because of titans like Jim,” said Trump who held up McCloughan as an example of “America’s unbreakable spirit.”

Just 23 years old at the time, McCloughan risked his life nine times rescuing “wounded and disoriented comrades,” according to a White House statement. Even after being wounded himself, McCoughan refused medical evacuation as he continued his efforts to “rescue, treat, and defend wounded Americans.” Three times he sustained wounds from shrapnel and small arms fire.

McCloughan was drafted into service and after returning home used his degree in sociology and teaching certificate to teach and coach sports at Michigan’s South Haven High School. He spent close to 40 years there teaching psychology, sociology, and geography and coaching football, wrestling, and baseball. He has been inducted into several Michigan coaches’ halls of fame.

In 1972, he earned a Masters Degree in counseling and psychology from Western Michigan University.