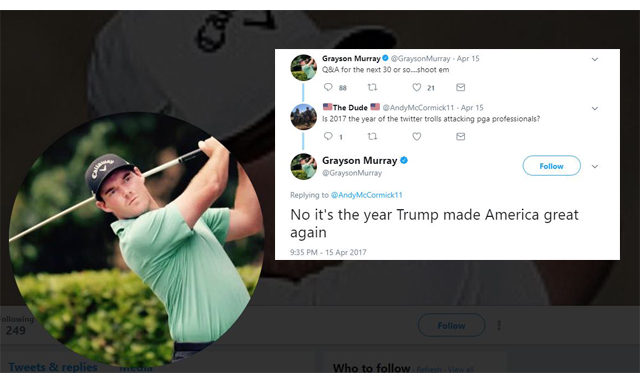 The controversial winner of the 2017 Barbasol Championship and the three-time winner of the Calloway Golf Junior Championships told Big League Politics he supports President Donald J. Trump and loves sharing his love of his sport with young golfers.

“I enjoy giving back to kids in need who can’t play golf without help since it’s so expensive,” said Grayson Murray, whose Barbasol win was his first win on the Professional Golf Association tour and earned him an invite to the 2018 PGA Championship tournament.

First Tee is a youth development organization that introduces young golfers to the game and teaches them integrity, respect and perseverance through various in and out of school programs, he said. The donations will be used to give scholarships to children who would normally not be able to afford to enter the program. On average, 53 percent of First Tee’s students use a scholarship to enroll.

The charity focused on young golfers said it was thrilled Grayson is helping them out with their year-end fundraising drive by matching donations up to $10,000.

“Grayson is challenging the community to join him in providing children with the same opportunity he had to play junior golf and learn the game’s inherent values,” according to the group’s website.

Murray is a 24-year-old golf pro from Raleigh, North Carolina, who said he has had nothing short of a wild ride to the PGA, turning heads for the right and wrong reasons along the way.

He went through three universities before dropping out completely to turn professional and has developed a reputation for his social media chicanery, where he has dissed international golf for being less competitive than American golf, allowing international players to rise through the world rankings more quickly, and asked Playboy model Lindsey Pelas to be his Master’s Par 3 caddie.

But for his perceived lack of social graces, Murray is also known for his big heart. When he was young, he made his friend’s mother turn her car around so he could give his last $5 to a homeless person. He recently donated $10,000 to a family who was having trouble paying medical bills after reading their story online.

Murray isn’t just a Trump supporter, but rather a Trump facsimile. Each has a penchant for controversy and a passion for golf, coupled with an undeniably big heart that can’t help but shine through.

“[2017 is] the year Trump made America great again,” Murray tweeted in April.

He has also defended Trump’s comments about the dishonesty of the mainstream media.

The FAKE NEWS media (failing @nytimes, @NBCNews, @ABC, @CBS, @CNN) is not my enemy, it is the enemy of the American People!

DeChambeau had a sponsor’s invite to the Genesis Open, a tournament from which he withdrew after 28 holes due to a hand injury and Murray missed the cut.

In May, just about the time when Trump was firing James B. Comey Jr. from his post as FBI Director sending shockwaves through Washington, Murray sent shockwaves through the PGA when longtime friend and caddie Mike Hicks quit after a disagreement with Murray on the ninth hole during the last round of the Wells Fargo Championship.