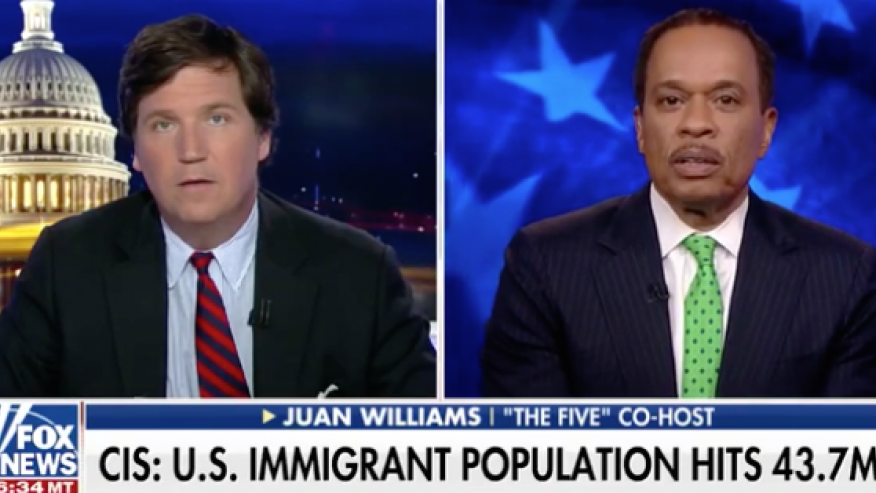 “The country (is) much less united.”

On Monday’s edition of Tucker Carlson Tonight, while talking with guest Juan Williams of The Five, Tucker pointed out that multiple studies indicate overwhelming division in America.  Furthermore, he made a powerful contention:  this lack of unity is directly related to massive illegal immigration.

“So we are at a moment—and every survey shows it—of total division in our society.  People have less in common with each other than they ever have.  And we’re asking basic questions like, ‘What ties us all together?  Why are we all in this together?’”

Suggesting that a respect for—and conformity to—law and order is a tie that binds, Carlson asked:

“Do you not see any correlation between massive immigration since 1965 and where we are now?  The country much less united, much less willing to ask basic questions like, ‘Is the Bill of Rights worth continuing?’  Things like that.  That’s not related to immigration?  Of course it is.”

“I don’t know anyone who’s challenging the Bill of Rights,” Williams claimed.

“The entire Left,” Tucker informed.  “The First Amendment has been…invalidated on college campuses.”

Williams indicated that he believes the key to unity is assimilation, and that it isn’t a question of (illegal) immigrant-vs-native-born.

“So if we’re trying to tell immigrants that law and order is a core American value,” Carlson said, “which is a core Western value, what is the message we send with, say, sanctuary cities?  Or the ‘dreamers?’  Aren’t we telling them in the clearest possible terms that when it’s politically inexpedient, we ignore the law?  That’s exactly the message we’re sending to our newest immigrants:  ‘You have the right to be here illegally.’  That’s what the Left is telling them every day.  That’s the law and order you hope to inculcate in our immigrant population?”

He made an interesting point.  Leftists in the media and in some of our governmental agencies are currently encouraging the breaking of laws that are meant to preserve the cohesion of our country.  Continuing, the Fox News host called out a virtual saint to the Left:

“When Nancy Pelosi congratulates dreamers for coming here illegally and says ‘Thank you for breaking the law’ that the Congress that she’s in passed, does that send a law and order message…to immigrants?”

Tucker is right.  We can’t expect to have unity in our country—or even the idea of a country, which is based on a system of laws—if we’re not willing to agree that our laws—and, therefore, our country—are worth respecting.  Watch the conversation here.