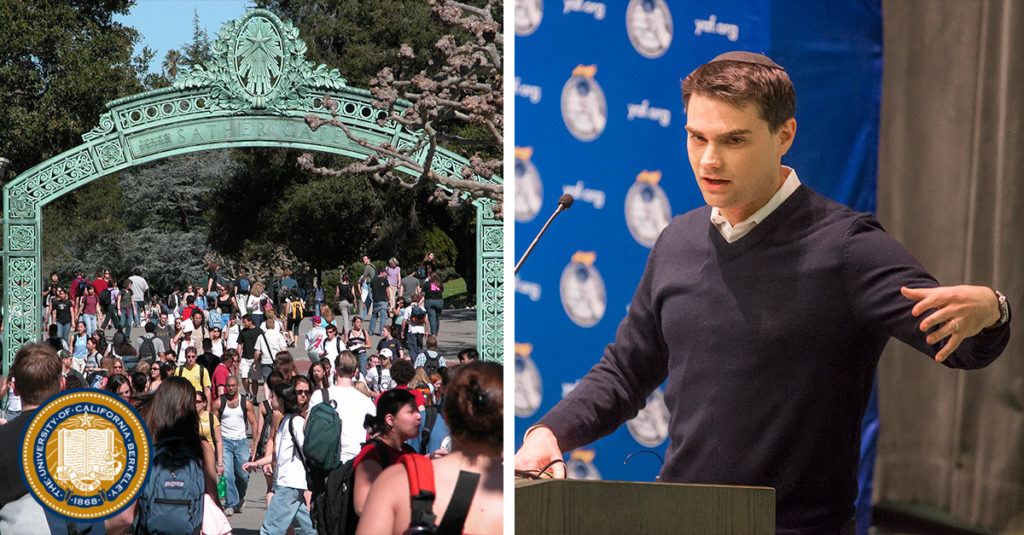 Carol Christ, the new chancellor of the University of California-Berkeley, was tired of arguing about the Berkeley College Republicans.

“This morning the chancellor said ‘Enough,’” and agreed to pay for any remaining costs not covered by the CRs to host conservative pundit Ben Shapiro the evening of Sept. 14, an administration spokesperson told The College Fix Thursday.

The concession would appear to end the squabbling between conservative organizations and the administration over a suitable venue, time slot and day for Shapiro to speak, less than a day after sponsor Young America’s Foundation said Berkeley had rejected its proposed date.

While welcomed by Shapiro and the Berkeley CRs, both said the administration had yet to reach out to them Thursday night to confirm media reports.

@UCBerkeley we're all waiting for an email from you actually affirming you'll make this event happen. @benshapiro @BerkeleyCRs @yaf https://t.co/YA3yWNUgPS

Neither I nor YAF have heard from Berkeley, nor have College Republicans. Let's hope Berkeley keeps their word. https://t.co/hcS7sK72zI

The proffered arrangement also won’t resolve the YAF and CRs’ ongoing First Amendment lawsuit against the school – the institutional home of the Free Speech Movement – for previous alleged discrimination against their invited speakers, including conservative firebrand Ann Coulter.

We don’t charge based on ‘intelligence about disruption’

When the administration rejected the proposed date, time and venue for Shapiro, it cited the CRs’ request for a free, large room – only a few of which are available on campus and were already booked for Sept. 14.

Dan Mogulof, assistant vice chancellor for public affairs, told the Foundation for Individual Rights in Education Thursday afternoon that the administration had agreed to “help fund any fees associated with hosting this event if need be” in order to show “the extent of our commitment to free speech.” He provided an “unedited” email chain with the CRs.

The administration initially asked the CRs if they’d consider paying for a room, which would let the group keep its 500-seat target, but “they never responded,” Mogulof said in a phone interview with The Fix.

Officials also wanted to ask if they’d be OK with a free venue that could seat “a few less people,” he said. “All of the details of the planning? That’s what happens in direct conversation,” which the CRs refused, according to Mogulof.

He explained that by offering to cover the CRs’ costs “if need be,” Mogulof was referring back to UC-Berkeley’s proffered cost accommodations for the anti-feminist firebrand Milo Yiannopoulos, whose campus event was canceled in response to widespread property destruction and threatened violence.

A donor had offered to pay Yiannopoulos’s security costs, initially estimated at $10,000, but because the administration canceled the event, only the university was on the hook for costs.

“What we saw with Yiannopoulos [the destruction and violence by protesters] had never happened here before” in response to a conservative or libertarian student event, he said: “I mean, we have donor-funded speaker series” to bring those perspectives to campus.

Mogulof emphasized that all hosting organizations pay one set of security fees “based on neutral, objective criteria” such as expected attendance, time of day and the speaker’s own requirements, and not prospective risks or “intelligence about disruption” in response to any given speaker.

Examples of administration favoritism cited by the CRs also paid those fees, including $25,000 from the organization that hosted the Dalai Lama, all the way “down to $200 for Will Ferrell,” the actor, he said.

The campus, in contrast, pays for the costs estimated by the police security assessment, which could be “five figures” under a “barebones,” low-threat assessment. Mogulof said the campus paid “at least” $400,000 for security around Coulter’s event, even though the pundit canceled the appearance, because of protesters and counter-protesters who showed up anyway.

Berkeley officials didn’t know that Shapiro’s appearances have provoked angry protests, including a mob that blocked doors and exits at his California State University-Los Angeles event, according to Mogulof: “None of us were even aware of any prior incidents with him.”

‘Calls into question the sincerity of their previous efforts’

Shapiro’s Daily Wire interpreted the administration’s comments to FIRE as its agreement to “cover all necessary security fees” for the Sept. 14 event.

Though the administration hadn’t contacted him, “as a California taxpayer, I’m pleased that they’re pledging to fulfill their commitment to the First Amendment,” Shapiro said. “Now let’s see them fulfill the pledge. Words without action won’t be sufficient, obviously.”

Before Berkeley’s afternoon about-face on the Sept. 14 date, Shapiro told FIRE he was demanding Berkeley disclose “who has booked all of the rooms” for Sept. 14 and said the administration had not given them “alternative dates and/or venues.”

Shapiro and his hosts would “start thinking about other options” if Berkeley didn’t accede. (Mogulof told FIRE he refused to “drag other groups into this news frenzy” by naming who already booked those rooms.)

YAF saw the reported accommodation as evidence of previous bad faith. Vice President Patrick Coyle told the Daily Wire that if “these rumors are true … it calls into question the sincerity of their previous efforts to secure a venue for Ben to speak.”

It released a more generous statement Friday morning, but said the administration had still not contacted the sponsoring organization directly.

YAF was “pleased to learn” from a Washington Post story that the university “may have a room available” whose fee will be waived on Sept. 14. (It’s not clear which story YAF means. The newspaper published an Associated Press story about the development, which said Shapiro’s sponsors would still need to cover “basic security costs.”)

In a Daily Wire column published before Berkeley’s afternoon offer, CRs Secretary Bradley Devlin said he was “extremely skeptical” about the administration’s claim the free rooms were already booked. He warned Chancellor Christ that Shapiro was coming regardless of the administration’s decision.

Asked for comment on Berkeley’s offer, Devlin pointed The Fix to Shapiro’s response in the Daily Wire report.

Mogulof told The Fix in an email that he wasn’t concerned about the precedent Berkeley might set by acceding to the CRs’ demands so soon after they took their gripes to the media, portraying it as a one-off decision.

“[W]e’re going to be having highly focused conversations with our student organizations about all this,” and “it will be made clear that” the university’s new event policy “needs to be adhered to going forward.”

It will be better for everyone if student organizations have a “face to face discussion” with administrators before nailing down events, he said. “[I]f the students come to us first before committing to a specific date and time, these sorts of issues can be avoided.”