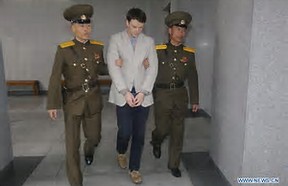 University of Virginia student Otto Warmbier, who has been detained in North Korea for 17 months, has been medically evacuated from the country in a coma, his parents told The Washington Post Tuesday.

Warmbier, who is 22, is due to arrive home in Cincinnatti on Tuesday evening, having been evacuated through an American military base in Sapporo, Japan.

Warmbier had been in a coma for more than a year, since shortly after his last public appearance: during his trial in Pyongyang in March last year.

“Our son is coming home,” Fred Warmbier told The Washington Post Tuesday morning after Otto had been evacuated from North Korea. “At the moment, we’re just treating this like he’s been in an accident. We get to see our son Otto tonight.”

His release was announced by Secretary of State Rex Tillerson in Washington Tuesday morning. Tillerson did not discuss Warmbier’s medical condition.

Warmbier was on a New Year’s Eve tour in North Korea, en route to Hong Kong, where he was to do a January study-abroad trip.

But on his final night in Pyongyang — New Year’s Eve — Warmbier appears to have gone to a staff-only floor of his hotel and attempted to take down a large propaganda sign lauding the regime.

Korea. Secretary of State Tillerson said Tuesday that North Korea has released the…

He was charged with “hostile acts against the state,” and after an hour-long trial in March, 2016, sentenced to 15 years in prison with hard labor.

He had not been seen in public since and Swedish diplomats, who represent American interests in North Korea because the United States has no relations with the country, had been denied access to him since then.

The Warmbiers were told that he had come down with a case of botulism soon after his trial – which lasted only one hour – and had been given a sleeping pill, from which he never woke up.

There is no way of knowing yet whether the North Korean version of events is true, but the Warmbiers have been told their son had been in a coma the whole time. State Department officials are accompanying Otto from Sapporo to Cincinnatti.

North Korea has woefully inadequate medical care and it is not clear how North Korean doctors had been caring for Warmbier during more than a year in an unconscious state.

Warmbier was flown out of North Korea on the same day that Dennis Rodman, the controversial basketball star, arrived for his fifth visit in Pyongyang. Rodman’s trip caused a media frenzy because of the heightened tensions between North Korea and the United States, but also raised speculation that he might be going as an envoy to secure the release of Warmbier and three other Americans being detained.

A former Virginia resident, Kim Dong-chul, was arrested shortly after Warmbier, on accusations of espionage, and has been held since.

In April and May, North Korea detained two other Korean Americans, both of them affiliated with the Pyongyang University of Science and Technology, a private institution run by Korean American Christians.

Previous detainees have been released after visits from high-profile Americans, including former presidents Jimmy Carter and Bill Clinton. But efforts to convince North Korea to release the men currently held had not been successful until Warmbier’s release Tuesday.

(First reported by The Washington Post and retrieved from MSN) http://www.msn.com/en-us/news/world/university-of-virginia-student-otto-warmbier-said-to-be-in-a-coma-released-from-north-korea/ar-BBCCHW3?ocid=spartanntp   (June 13, 2017)