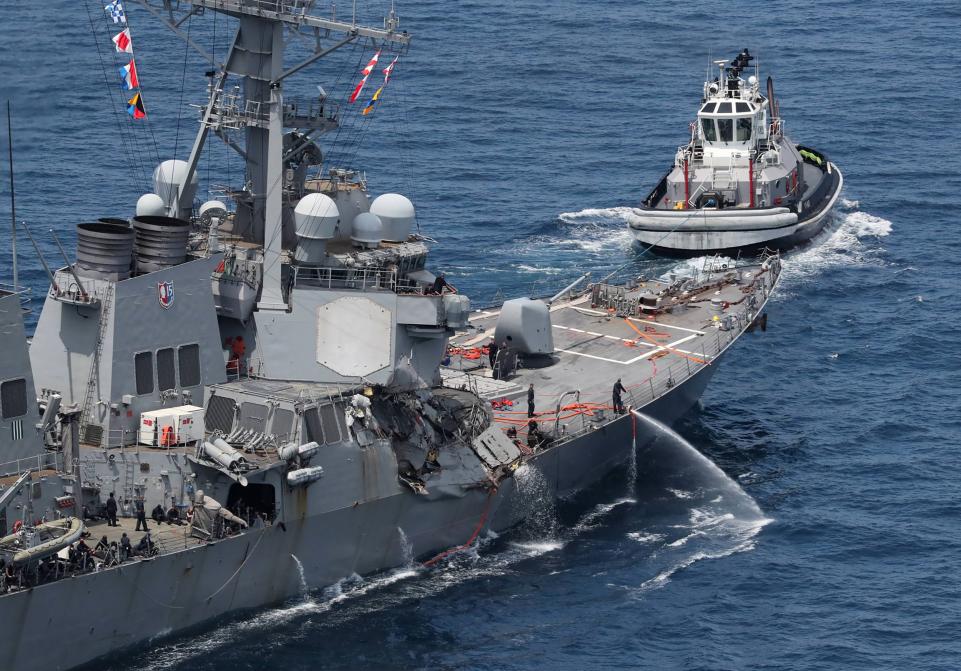 Japanese Coast Guard investigators are trying to figure out why it took nearly an hour for a distress call to be made after a U.S. destroyer suffered a collision with a Philippine-flagged merchant ship last week, leaving seven American sailors dead.

The U.S. Navy first said the collision between the USS Fitzgerald and the ACX Crystal occurred “at approximately 2:30 a.m. local time” on Saturday morning while operating about 56 nautical miles southwest of Yokosuka, Japan.

However, some security experts used publicly-available ship tracking data to place the collision more around 1:30 a.m.
Breitbart News contacted the Navy’s 7th Fleet early Monday morning about the time discrepancy, and a spokesman referred back to its first press release with the approximate time of 2:30 a.m.

“Thank you for your message. Here is a link to our first release regarding the incident. However, the timeline of events will be part of the investigation,” a spokesman for 7th Fleet said in an email.

The Japanese Coast Guard later on Monday confirmed to the New York Times and other outlets that the collision happened about an hour earlier than believed, and it was investigating whether there was a delay in the reporting of the crash.

Tetsuya Tanaka, a Coast Guard spokesman, said the crew of the Philippine ship, the ACX Crystal, first reported the collision at 2:25 a.m., saying that the collision had just occurred, so the Coast Guard had at first estimated it to have happened around 2:20 a.m.

Then Nippon Yusen, the Japanese shipping company that chartered the Crystal, determined upon further investigation that the collision had happened around 1:30 a.m., and the Coast Guard amended its information to reflect that, Tanaka said.

It is not clear why the U.S. Navy has not amended its timeline.

Cmdr. Bill Clinton, a spokesman for the 7th Fleet, told the Times on Monday: “The investigations will look at all aspects of this incident to find an answer to the cause of this collision… I won’t speculate on why there may be a discrepancy at this time.”

The Japanese Coast Guard’s investigation will try to determine what the crew of the Crystal was doing before the collision was reported, which could provide clues as to what happened. Japan’s Transport Safety Board also started an accident investigation.

Security expert Steffan Watkins, an independent open-source intelligence analyst and contributor to Jane’s Intelligence Review, believes the Crystal may have been sailing on auto-pilot and that none of the crew were on the bridge at the time of the collision.

He said judging from the Crystal’s path, after the collision, it veered dramatically off-course after the impact, corrected itself, and continued to sail its course before making a U-turn to see what had been hit, arriving back near the USS Fitzgerald about an hour later.

By my understanding of the events I believe there was nobody on the bridge of [the] ACX Crystal at the time of the collision, and for ~15 minutes afterwards showed no signs of being manned with anyone on the bridge as the course auto-corrected, and increased speed, moving way from the impact site, trying to come back up to the original speed.

The collision caused catastrophic damage to the USS Fitzgerald’s starboard, or right, side. It is not clear yet why the Fitzgerald did not yield to the Crystal per international maritime laws.

The collision caused damage above and below the USS Fitzgerald’s waterline, causing flooding in the ship. Of the crew’s nearly 300 sailors, seven who were in bunks at the time were killed.

Tanaka said officials are planning to get ahold of a device with communications records to examine the details of the crash. He said the case is being investigated as possible professional negligence but that no criminal charges have been made so far.

According to the U.S. Navy, the fallen sailors were:

White House Press Secretary Sean Spicer on Monday said President Trump and the entire administration were extending their thoughts and prayers to the sailors.

“The President and the entire administration extends our thoughts and prayers to the sailors — the seven Navy sailors who lost their lives this past weekend. Their deaths while on patrol in the Western Pacific are a sobering reminder of the dangers that the men and women of our military face every day,” he said.