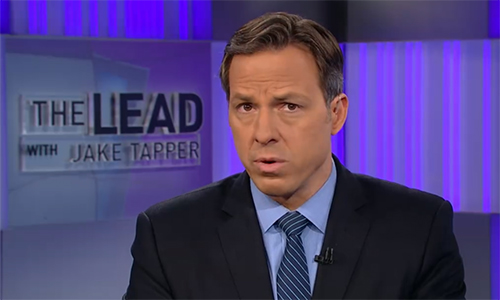 CNN’s Jake Tapper, who is already dealing with humiliating ratings and a reputation implosion, decided to put on a public spectacle Wednesday over the criticism of his blatantly inappropriate and misleading comments surrounding the Islamic cry of “Allahu Akbar.”

In the immediate aftermath of Tuesday’s terror attack, the worst in New York City since September 11, 2001, for some bizarre reason, Tapper felt the self-righteous need to say this: “The Arabic chant, Allahu Akbar, God is great, sometimes said under the most beautiful of circumstances, and too often we hear it being said in moments like this.”

Let us begin with the misleading part.

“Allahu Akbar” does not mean “God is great.” It means, “Allah is greater.”

The left-wing CNN also misinterpreted this in a chyron.

As Breitbart News has reported, “Allahu Akbar” is the “aggressive declaration that Allah and Islam are dominant over every other form of government, religion, law or ethic, which is why Islamic jihadists in the midst of killing infidels so often shout it.”

In other words, “Allahu Akbar” is not some benign chant declaring “God is great.” Rather, it is a belligerent cry of religious and cultural supremacism.

But on top of misleading his viewers, there is the jaw-dropping  inappropriateness of Tapper’s imperious reminder that “Allahu Akbar” is “sometimes said under the most beautiful of circumstances.” As Cheryl K. Chumley of the Washington Times accurately points out, “so was Heil Hitler” said at weddings, funerals, family reunions, and children’s birthday parties. But who thinks offering that kind of context is anything but unseemly?

So not only were Tapper’s comments tasteless and inaccurate, to deflect from the deserved criticism, he decided to portray himself as the victim of the eeeeevil right-wing media.

Using one of his transparent semantic arguments, Tapper publicly freaked out and launched a hysterical Twitter crusade declaring his critics a liar, including those who quoted him directly, like Sean Hannity, who did nothing more than broadcast video of the segment in question:

Another lie, this time from the Washington Times' @ckchumley, claiming i said something i never said. Just a blatant lie. https://t.co/9hHDkLaWnv

There was a time when one could tell the difference between Fox and the nutjobs at Infowars. It’s getting tougher and tougher. Lies are lies https://t.co/stYjntoJUq

Here's where the lie started, with @NGivasDC at @DailyCaller who isn't familiar with how an adjective modifies a noun. https://t.co/I3nA89wj4N

.@NGivasDC — the adjective "beautiful" modified the noun "circumstances." Not the Arabic prayer. Not sure if you're dim or purposely lying

Hannity lying now. The @FoxNews tweet I was referring to has been deleted because it was false. https://t.co/WPQtgzNGuU

And, no surprise, @SebGorka lies as well, claiming i said Allahu Akbar was a "beautiful phrase." Never said it, Sebastian. Blatant lie. https://t.co/Q183XgwXOC

Things only got more entertaining from there as the meltdown spread like an STD through those mindless minions forever begging for crumbs from #JakeSoWoke, and they formed a Borg Army of the Dishonest:

This is an insane Fox News hit piece on @jaketapper that plays at people's ignorance pic.twitter.com/qVqcCNsNe2

Fox News should unequivocally apologize to @jaketapper for this bullshit https://t.co/yIWzYSCvPK

I stand with Jake. He is exactly right. In my random sample of people in TX: 98% trust Jake, 1% trust Fox News, 1% said go astros!

The King of Fake News did not achieve that moniker by accident. As has been detailed here, Tapper’s outrageously dishonest semantic arguments (e.g. I did not say Allahu Akbar is “beautiful”; I said it is said during the “most beautiful of circumstances”) are the failing, left-wing anchor’s stock-in-trade when it comes to spreading fake news.

Among other things, Tapper has hid behind the slippery shield of semantics to continue to spread the debunked lie that President Trump mocked a reporter’s disability, to pretend Trump did not disavow David Duke, and to mislead his viewers into believing Trump failed to express condolences after a terrible attack on a mosque in Canada.

But this is not the first time Tapper has publicly lost his poise.

This video from election night 2016, pretty much says it all: