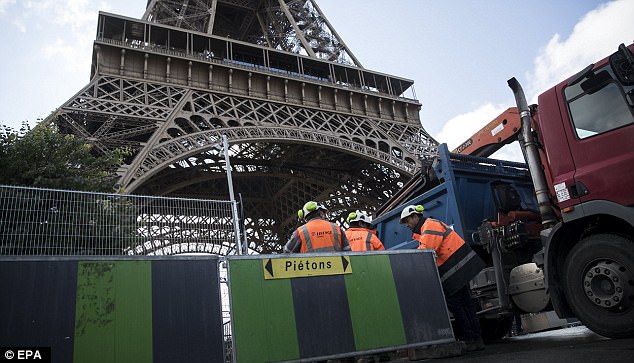 Construction workers began building a giant glass wall around the Eiffel Tower on Monday to shield the historical monument from Islamic terrorist attacks.

Different reports indicate that construction of the wall, announced in February, could cost anywhere from approximately $17–30 million (USD) and will take a little under a year to complete.

The glass wall is intended to replace “temporary metal barriers and prefabricated buildings” that the government installed after deadly Islamic terrorist attacks began rocking the country on a regular basis in early 2015, Deutsche Welle reported.

Builders will erect the 8-foot tall, bullet-proof glass wall on “the two sides of the tower parallel to the river Seine” while the other two sides “will be protected by metal fences designed in the pattern of the tower’s shape.”

The ramped-up security efforts come after several Islamic terrorist attacks have claimed the lives of more than 230 people in the last two years in areas in and around Paris.

“Some 7,000 troops have been deployed under an anti-terrorism operation known as Sentinelle, patrolling streets and guarding tourist hotspots, since the jihadist attack at the offices of Charlie Hebdo magazine in January 2015,” the Economic Times added.

Other major terrorist attacks in the area include the Paris massacre in 2015 that left 130 people dead and the Nice truck attack in July 2016 that left 86 people dead.

In addition to the glass wall, a refurbishing project will launch in 2018 that seeks to repaint the entire tower and replace its aging elevators, as well as build a new reception center in 2021 — all of which is in preparation for the Paris Olympic Games.

At 128-years-old, the Eiffel Tower attracts over six million visitors per year and was Paris’ fourth most popular visitor attraction in 2016.