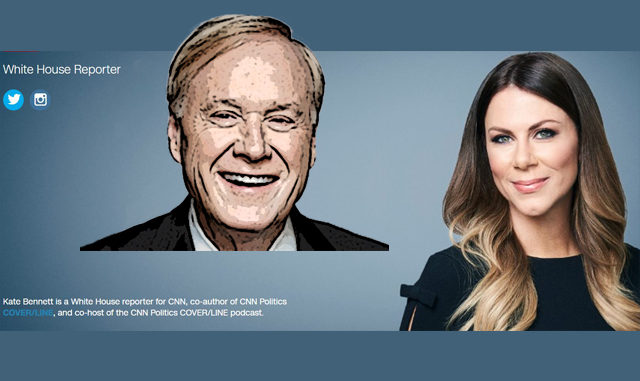 A former producer for “Hardball with Chris Matthews,” now White House reporter at Cable News Network could be the female, who received a cash settlement after she complained about the Philadelphia-born pundit’s sexually oriented banter.

Saturday, The Daily Caller reporter Amber Athey posted that a spokeswoman from MSNBC confirmed to the outlet that a female “Hardball” producer received a severance package in 1999, but disputed the $40,000 figure another source told them.

It was in 1999 that Kate Bennett, then Kate Glassman, left Washington for a 10-year stint in Las Vegas, where she married, became a mother and worked as a reporter, then editor-in-chief of Vegas magazine. She returned to DC to take over Capitol File in 2010.

Bennett grew up in Chevy Chase, Maryland and after her 1997 graduation from St. John’s College, an Annapolis liberal arts school with no religious affiliation, joined the production staff of Matthews’ program.

Big League Politics has not confirmed that Bennett was the producer involved in the Matthews payout, but her dates of employment line up with those in the situation.

Bennett did not respond to inquiries from Big League Politics.

A senior spokesperson for NBC News did not have a comment for the record when the spokesperson responded to an inquiry from Big League Politics.

Bennett is the daughter of James K. Glassman, the executive director of the George W. Bush Institute and former head of public diplomacy for Bush’s State Department. Glassman has been a columnist, television personality and media executive, including a stint as editor of Washingtonian magazine, where his daughter also was a writer.

As a CNN reporter covering the White House, Bennett focuses on First Lady Melania Trump, drawing on her deep experience as a fashion and society writer–but, also brings a serious journalism ethos to a beat that others do not.

It is also interesting that in the days after The Daily Caller story ran about Matthews, Bennett has laid off commenting on Twitter or retweeting stories relating to the Matthews story. According to her Twitter feed, Bennett was in Michigan and Canada the weekend the story broke.

Typically, Bennet has Tweeted or retweeted about prominent men, not named Chris Matthews, who got tripped up in sexual behavior scandals: