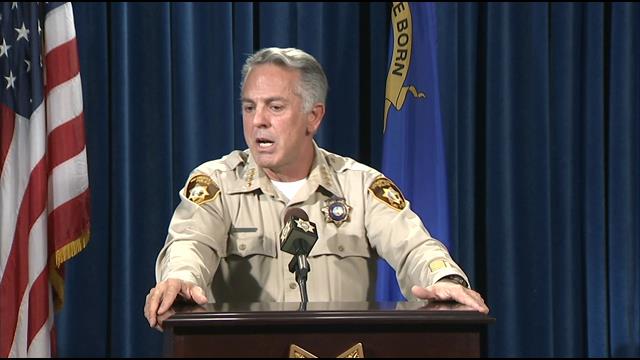 Clark County Sheriff Joseph Lombardo offered new information at a press conference Monday afternoon following the deadly mass shooting in Las Vegas. The motive is still unknown, but authorities have raided the shooter’s home in Mesquite, Nevada and made some startling discoveries.

He also had ammonium nitrate in his car, and over a dozen more guns in his hotel room.

Clark County, Nevada Fire Department Chief Greg Cassell added that he has “never” seen so much ammo in one individual’s possession before.

The shooter, 64-year-old Stephen Paddock, was “not an avid gun guy,” according to his brother Eric. Additionally, the owners of gun stores he had frequented told the media that Paddock had passed their background checks.

Paddock’s girlfriend is now a person of interest and is reportedly in Tokyo. Upon her return to the States, Lombardo says they will be contacting her.

Las Vegas hotels have stepped up security measures, checking customers’ bags at the door, while Clark County has issued a state of emergency.

An #emergency has been declared in #ClarkCounty as a result of #vegasshooting. It was issued a short time ago. #PrayForVegas pic.twitter.com/imiIqA6Ves

The death tally has now risen to 59, and 527 individuals are dealing with injuries, according to the sheriff.

(First reported by The Townhall)   https://townhall.com/tipsheet/cortneyobrien/2017/10/02/more-information-on-vegas-shooter-n2389754