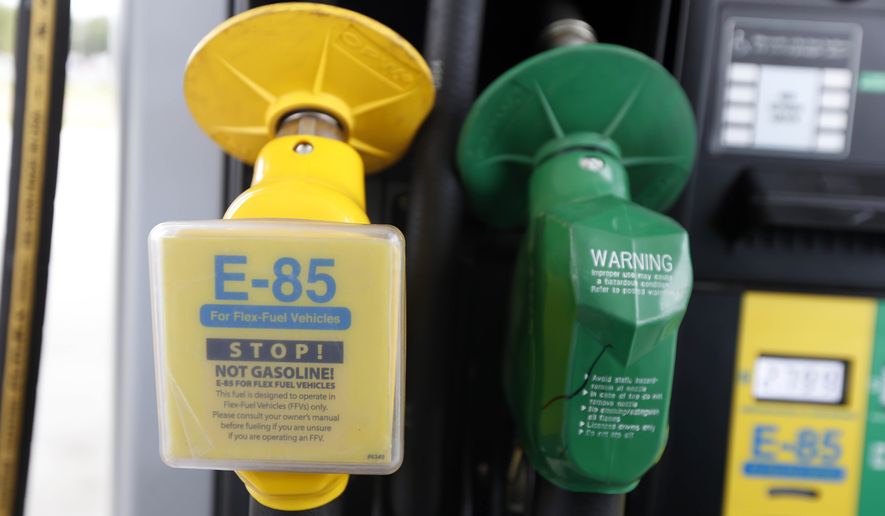 Politicians don’t have a crystal ball that can predict the future of energy prices, energy supplies, or demand for electricity and gasoline.

But they pretend to, and that’s a problem. It leads to market-distorting policies that harm Americans as consumers and taxpayers.

Ethanol, the most common biofuel, is made from corn, sugarcane, potatoes, soybeans, and other biomass. The Environmental Protection Agency has the authority to set yearly obligations to be met, which the agency recently did for 2018.

One of the main reasons the federal government enacted the Renewable Fuel Standard was to lessen U.S. dependence on oil and foreign sources of energy. In January 2007, then-Senate Majority Leader Harry Reid, D-Nev., said, “We can’t produce our way out of the problems we have with oil. The only alternative we have is to look to alternative fuels: the sun, the wind, geothermal, biomass.”

The growth of biofuels as a result of the mandate is minuscule compared to the country’s overall demand for fuel. Yet ethanol consumes a large share of the corn crop and an increasing amount of the soybean crop. The ethanol quota diverts valuable cropland away from other agricultural uses and increases feed prices for cattle and poultry farmers.

Practically one-quarter of all biodiesel consumed in the U.S. in 2016 was imported from other countries. An overall net exporter of ethanol last year, the U.S. was a net importer of biodiesel.

What’s the government’s solution? Just like it did for cheaper Brazilian ethanol years ago, the Commerce Department is imposing a 71.45 percent to 72.28 percent tariff on Argentinian biodiesel.

If the federal government is going to force a biofuel mandate on Americans, at the very least it should be able to buy the cheapest biofuels on the market.

The problem is not the importation and exportation of ethanol. Freely traded energy, no matter the source, will benefit households and businesses with competitive prices and more choices.

The issue is that the mandate was sold on the false promise of ethanol being the silver bullet to end our dependence on foreign oil, as well as claims of imminent resource exhaustion to justify the program.

For instance, Ken Salazar, then Colorado senator and later secretary of the interior for President Barack Obama, stated in November of 2005 that “by 20 to 25 years from now, we will be importing 70 percent of our oil from foreign countries. … The problem that we face for sure is due in part to dwindling resources here in America. Domestic reserves of oil and natural gas are declining while our demand continues to grow.”

While there’s still time for Salazar’s prediction to come true, the evidence and trends certainly aren’t pointing that way.

We’re not running out of natural resources. In fact, from the time Salazar made that prediction to now, America has reduced imports from over 307 million barrels of crude oil a month to 244 million barrels. The higher production of domestic oil as a result of the tracking boom has reduced net imports far more than ethanol has in the past decade.

Government programs like the Renewable Fuel Standard are ineffective because they cannot account for human ingenuity that can unlock new reserves of energy and innovations that breed new technologies.

Politicians like to make promises they can’t keep and make predictions that sound like an impressive feat of prognostication. But politicians feel no repercussions when the market proves them wrong.

It’s long past time to recognize the Renewable Fuel Standard has failed to deliver on its promises, and that the market predictions upon which it was based are not today’s energy reality.

(First reported by Nicolas Loris and published by The Daily Signal) http://dailysignal.com/2017/12/05/congress-ditch-renewable-fuel-standard/   (December 5, 2017)