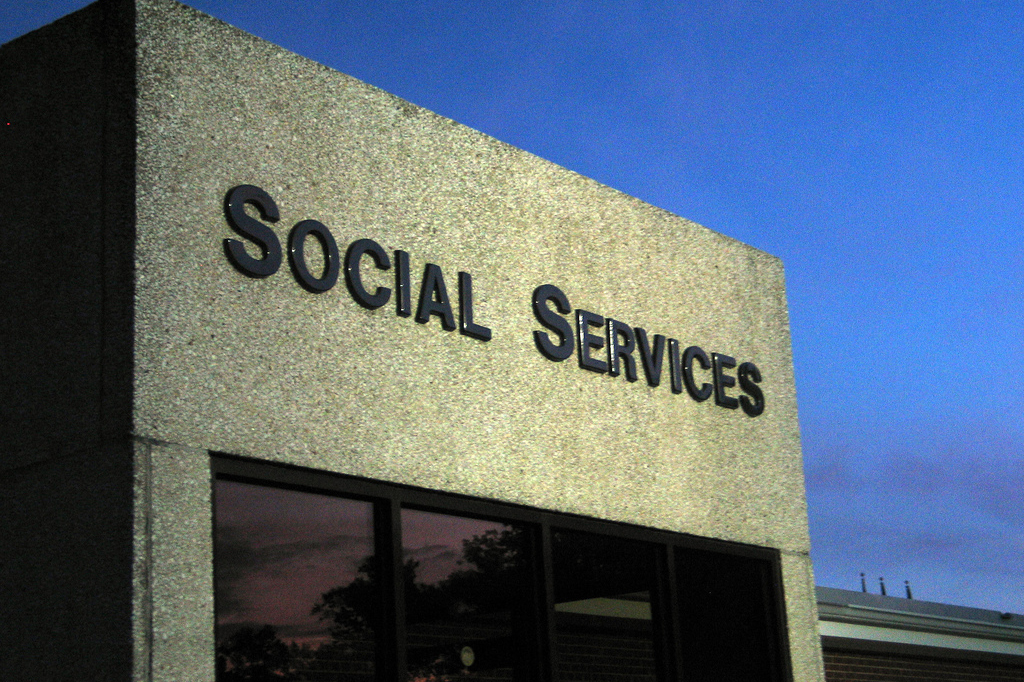 Welfare reform is becoming an issue again and the left isn’t happy about it.

Rep. Jim Jordan, R-Ohio, recently proposed a bill, backed by the conservative House Freedom Caucus, that would increase work requirements for those on welfare, as well as create billions of dollars in savings for taxpayers. This would be the most significant overhaul of American welfare laws since the Republican Congress and President Bill Clinton worked out a deal in 1996.

However, left-wing detractors have been quick to attack the welfare reform idea, both claiming that the 1996 law didn’t work and that the recent legislation is merely a way to provide tax cuts for the wealthy at the expense of the poor.

A recent Vox article characterized the welfare reform bill as a partisan push from Republicans that benefits very few at the expense of many. The piece questioned the idea that work requirements for able-bodied adults without dependents produced widespread benefits and portrayed the particulars of the modern bill as being overly harsh toward the needy.

“If this proposal goes through, fewer people would receive benefits, and that’s not necessarily because they don’t need them,” Vox’s Tara Golshan wrote.

While Vox stated that the drive for welfare reform is a Republican priority, research has shown that there is widespread, bipartisan support in America for welfare programs that move able-bodied recipients toward work.

Unfortunately, while some welfare programs already have work requirements—like Temporary Assistance for Needy Families (TANF) and the Supplemental Nutrition Assistance Program–many of them have proved ineffective and difficult to enforce.

The proposed welfare reform would strengthen the TANF work requirements by includes stricter monitoring for accountability, fewer loopholes for escaping requirements, and greater responsibility for funding pushed toward the states. It would also require able-bodied recipients of SNAP to work or prepare for work.

The benefits of this latter change are apparent in two states in particular that have already implemented their own reforms.

Stronger work requirements have paid serious dividends in Kansas and Maine in particular.

After Kansas bolstered work requirements in the food stamp program, nearly half of recipients found a job within three months, and their average incomes rose by 127 percent.

A report from the Foundation for Government Accountability showed that the change not only loosened welfare recipients from the public dole, but ended up lifting them above the poverty line.

The number of food stamp recipients in Maine had exploded in the last decade, which put a massive burden on the state’s budget. Yet, many of those who received benefits were able-bodied adults.

As a Heritage Foundation study noted, the food stamp caseload for able-bodied adults in the state “grew by nearly 150 percent between 2008 and 2014 and has risen from nearly 2 million recipients in 2008 to around 5 million today.”

In the wake of this worrying rise in food stamp usage, Maine Gov. Paul LePage spearheaded a change to the system to encourage work. The reformed program placed stronger requirements for recipients to get a job or demonstrate that they are training to get one. The state also improved its methods to monitor and make sure these stipulations were met.

The result was dramatic.

After Maine had placed these work requirements on able-bodied food stamp recipients, the caseload among able-bodied adults without dependents “plummeted by nearly 80 percent, falling from 13,332 recipients in December 2014 to 2,678 in March 2015.” 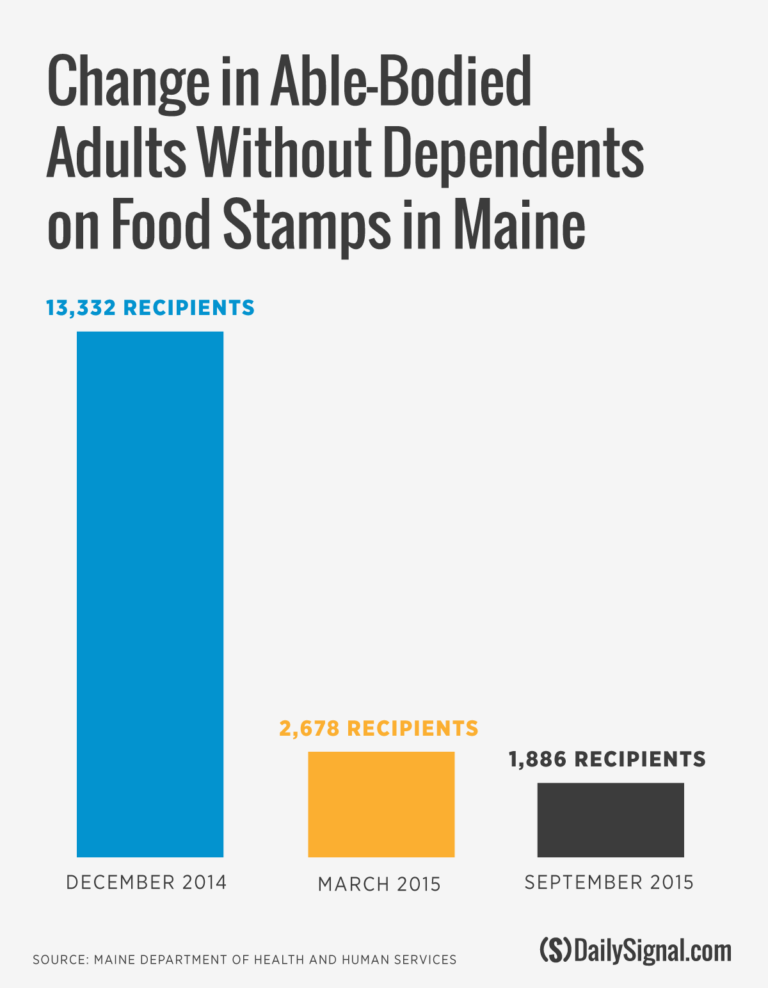 A Cycle of Dependency

While the statistical turnaround in places like Maine and Kansas is significant and dramatic, it’s even more important to understand how the change impacts individuals’ lives.

Pushing people to escape welfare doesn’t just benefit the “rich,” or society as a whole, it makes significant differences for individuals whose lives have descended on a slew of despondency.

In 2016, The Daily Signal’s Melissa Quinn reported on how Maine’s policy change turned one Maine resident’s life around.

Jill Rothrock, a single mother who had battled drug addiction, began receiving Temporary Assistance for Needy Families in 2007, and stayed on the program for years.

The program had limited work requirements before the change, but under the new rules, a 60-month time limit was placed on the benefits. This encouraged Rothrock to pursue employment aggressively

“When you’re on TANF and you’re getting that money, it becomes your security blanket,” Rothrock said. “It seems like a heck of a lot more money than it really is because that’s the only money you’re getting. To go off of it was, it was really scary.”

“I knew my TANF was closing, and I had to secure a job or I would have no income,” Rothrock continued.

Though Rothrock said the prospect of losing welfare benefits was scary, it ultimately helped her escape the cycle of dependency that traps some families for generations.

“Nothing feels as good as earning your own money, and it’s scary to not have that safety net there,” she told The Daily Signal in 2016. “I see these girls whose mothers are on TANF. It’s handed down. It’s a way of life. You turn 18. You get pregnant. You come to [the Department of Health and Human Services] and get on benefits.”

Policy can encourage or discourage personal responsibility. Voices as early as the Founding generation warned about increasing poverty through misguided attempts to aid the poor.

In response to government economic meddling and the British welfare system, Benjamin Franklin wrote in 1766:

I am for doing good to the poor, but I differ in opinion of the means. I think the best way of doing good to the poor, is not making them easy in poverty, but leading or driving them out of it … In short, you offered a premium for the encouragement of idleness, and you should not now wonder that it has had its effect in the increase of poverty.

Franklin wrote that removing “inducements to industry, frugality, and sobriety” would increase poverty and fail to help the destitute. This statement is no less true today than it was then.

Instead, the government must embrace policies that encourage self-sufficiency—which is exactly the intent of welfare work requirements.

While the left insists that removing government aid is cruel to the poor, they misjudge why those on the right are naturally skeptical.

Escaping poverty and dependency is a challenge for anyone. It is simply human nature to accept low-hanging fruit when the road to success is arduous. This is why conservatives support policies that ensure that safety nets don’t become a permanent way of life.

A welfare system that encourages work for the able-bodied—and thereby allows programs to serve the needy who are unable to care for themselves—is not just good for budgets, it’s good for the Americans who are struggling to escape poverty.