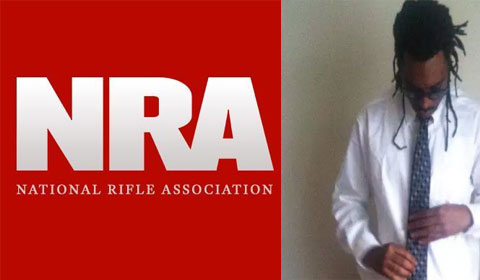 The Women’s March is putting the National Rifle Association in its sights. On the event’s Facebook page, they have a planned march set for July 14 in which they say the following [emphasis mine]:

Recent actions of the NRA demonstrate not only a disregard for the lives of black and brown people in America, but appear to be a direct endorsement of violence against women, our families and our communities for exercising our constitutional right to protest

Please join the Women’s March and our partners in exercising our First Amendment rights by holding a mass mobilization for our safety, calling on the NRA to take the following actions:

1. Take down the recent irresponsible and dangerous advertisement videos from all social platforms immediately.

2. Issue an apology to the American people for the video that suggests armed violence against communities of color, progressives and anyone who does not agree with this Administration’s policies.

3. Make a statement to defend Philando Castile’s Second Amendment right to own a firearm and demand the Department of Justice indict the police officer who killed him for exercising his Second Amendment right and his privilege as a licensed concealed carry permit holder. This call is clearly in line with the mission and purpose of the NRA as an organization that purports to be the lobby and defender of the right to bear arms.

The second demand is nonsense. NRA spokeswoman Dana Loesch was denouncing politically motivated violence by anyone, which isn’t a controversial issue. Yet, the Left saw this as a defense of white supremacy, an urging for civil war, and maybe a call to shoot liberals—all of which is unadulterated crap. Yet, the third demand is, well, not absurd. In fact, it’s a valid point.

Philando Castile was the black man who was shot in St. Anthony, Minnesota last year. The municipality rests within the shadows of the Minneapolis-St. Paul area. Castile had a lawful concealed carry permit. He was pulled over for a routine traffic stop. Castile’s girlfriend, Diamond Reynolds, livestreamed the original video of the tragedy on Facebook, showing Castile dying and Reynolds overwhelmed with shock at the loss of her boyfriend. Reynolds’ four-year-old daughter was also in the car. On June 16, the officer that shot and killed Castile, Jeronimo Yanez, was acquitted of second-degree manslaughter. Yanez was still terminated from the department. On June 20, the dashcam footage was released and it shows the moments that led to his death. Officer Yanez said that Castile’s brake lights were out, which would warrant a traffic stop. He asks for Castile’s license and registration. Castile also informs the officer that he has a firearm on his person, and apparently was in the process of retrieving his permit from his wallet, which led to Yanez saying don’t touch it before firing several shots into him. From the footage, it does look like an unlawful use of lethal force. Where was the threat?

David French at National Review said the acquittal of Officer Yanez was a miscarriage of justice. Castile seemed to be following what any law-abiding citizen who had a carry permit should do concerning being pulled over or approached by the police.  Allahpundit cited the apparent lack of threat here as well, along with noting Castile’s final words: “I wasn’t reaching for it.”

The defense here is that Castile was given an order not to do something that might cause the officer to fear his life was in danger, and although he apparently obeyed it (Castile says, clear as day, “I’m not pulling it out”), the officer might reasonably yet mistakenly have believed that he was about to be shot. Clear judgment is difficult in the heat of the moment, after all. But if Castile had murderous intentions … why would he have told the cop that he had a gun in the car? He would have kept quiet and ambushed him. If he had gotten angry, if he had suddenly produced the gun without first warning the cop that it was there, then you could have understood the officer reacting defensively. But Castile’s calm as can be. He had a right to have his weapon with him. At worst, you would think, the confusion should have resulted in the cop pulling his weapon and aiming it at Castile as he began to reach so that he was prepared to fire if need be. Watch how he freaks out, though, and starts blasting away. How many other cops encounter drivers every day who have lawful weapons on them yet somehow manage to avoid wasting them on sight?

Jazz Shaw had more, including his call for the NRA to be more vocal about this:

This doesn’t have the odor of a cop who was out to murder someone (despite his obviously questionable comments on the radio prior to the stop). But this was definitely a guy who was either entirely lacking in proper training for such situations or possibly had the training but was totally unsuited for a job in law enforcement based on his temperament. We saw an officer who was, as AP described it, completely in panic mode after being informed by the driver that there was a legally owned firearm in the vehicle.

I’m not saying that the NRA should be out there leading the charge in calling for Yanez’s head on a platter because, as I already noted, this wasn’t a Michael Slager type of killing. But by the same token, we should all want the organization to speak up on behalf of the rights of all law abiding gun owners. The group has developed too much of a reputation as an organization populated by old white guys. But we don’t want the NRA to be just for old white guys. It needs to represent everyone who supports and defends the Second Amendment and stays on the right side of the law. This is much the same as many other elements of conservative philosophy which are all too often viewed as “white issues” when they should be properly treated as issues which affect and benefit everyone equally.

With those thoughts in mind, considering how Castile had done everything we are supposed to do as responsible, law abiding gun owners, the NRA could benefit us all by coming out more strongly than ever in this instance. We expect gun owners to behave responsibly and this tragic death is a reminder that we should expect no less from our law enforcement officers. They need to be trained and ready at all times to properly respond to any legal owners of firearms they may encounter in the course of their duties, and when they fall short of that ideal they must be held accountable. Otherwise, we’ll never break through this stereotype of the Second Amendment being “a white issue” which is held by too many in our nation.

At the same time, the NRA shouldn’t have to answer for every mass shooting, just like Bernie Sanders doesn’t have to answer for James Hodgkinson’s actions. Hodgkinson was the Sanders supporter and avowed leftist who opened fire on GOP lawmakers as they were practicing for their annual charity baseball game last month. House Majority Whip Steve Scalise (R-LA) was hit in the hip and suffered catastrophic injuries. He recently underwent surgery to manage an infection.  It wasn’t Sanders’ fault, but the Vermont senator issued a strong condemnation of Hodgkinson, who volunteered for his campaign.

When mass shootings occur, the NRA has long refused to comment on such tragedies, partially because their statements could be uses as political ammunition for the anti-gun Left, or misinterpreted by the news media. For any Catholics out there, you know how the news media often twists and distorts what comes out of the Vatican, which is why you should just go to their press office for the actual statements, but I digress.

Yet, speaking for myself, what makes the NRA’s silence somewhat puzzling is the fact that they did offer something of a comment on the Philando Castile shooting last year, notably how they were troubled by the initial reports. So, it’s clear: they’re for everyone’s gun rights, which any right-leaning individual knew already, and they said the incident was disturbing but won’t say anything until the investigation is over.

As the nation’s largest and oldest civil rights organization, the NRA proudly supports the right of law-abiding Americans to carry firearms for defense of themselves and others regardless of race, religion or sexual orientation.

The reports from Minnesota are troubling and must be thoroughly investigated. In the meantime, it is important for the NRA not to comment while the investigation is ongoing.

Rest assured, the NRA will have more to say once all the facts are known.

Maybe they are combing through the court documents and reviewing testimony, but in the meantime, the Left, as always, is dragging them through the mud—while also noting the silence maybe part of some political angle (i.e. lack of defense of minority gun rights) that is also erroneous.

Townhall did reach out for a comment from the NRA, but did not hear back from them. Whatever the case may be the dash cam video seems to undercut Yanez’s testimony that he feared for his life, and that he had no choice. Whatever the case, the NRA should probably brace for some unpleasant leftys showing up at their doorstep, along with the usual talking heads bringing up guns rights, the Second Amendment, and white people, threading the needle for the perfect social justice warrior false narrative to be used to fundraise and energize the progressive base for the 2018 midterms. The video footage and Yanez’s defense from the Star Tribune are embedded in the post. You decide?

Yanez spoke to investigators from the Minnesota Bureau of Criminal Apprehension (BCA) the day after the shooting, explaining that he pulled Castile over because of a nonworking brake light and in order to check whether he was one of two men from an armed robbery four days earlier.

He didn’t know whether Castile’s passenger, girlfriend Diamond Reynolds, was a man or a woman — only that the passenger wore a hat.

“I just knew that they were both African American, and the driver, uh, appeared to me that he appeared to match the, uh, physical description of the one of our suspects from the strong arm robbery, gunpoint,” Yanez said in the interview.

“Um, it was a [sigh], I can’t remember the height, weight but I remember that it was, the male had dreadlocks around shoulder length,” Yanez said. “…And then just kind of distinct facial features with like a kind of like a wide-set nose.

”The audio recording of Yanez’s one-hour interview was never played by prosecutors during his three-week trial. Prosecutors sought to introduce it late in the trial, but the judge said no. Jurors requested the full BCA transcript of the interview during deliberations but were denied by the judge. The interview also showed that Yanez frequently mentioned smelling burnt marijuana in the car. The issue featured prominently in his defense at trial. Six seconds after Castile told Yanez he had a firearm, Yanez shot him. Castile’s permit to carry was later found in his wallet.

“I thought, I was gonna die,” Yanez later recounted about the moments leading up to the shooting, “and I thought if he’s, if he has the, the guts and the audacity to smoke marijuana in front of the five year old girl and risk her lungs and risk her life by giving her secondhand smoke and the front seat passenger doing the same thing then what, what care does he give about me. And, I let off the rounds and then after the rounds were off, the little girls [sic] was screaming.”