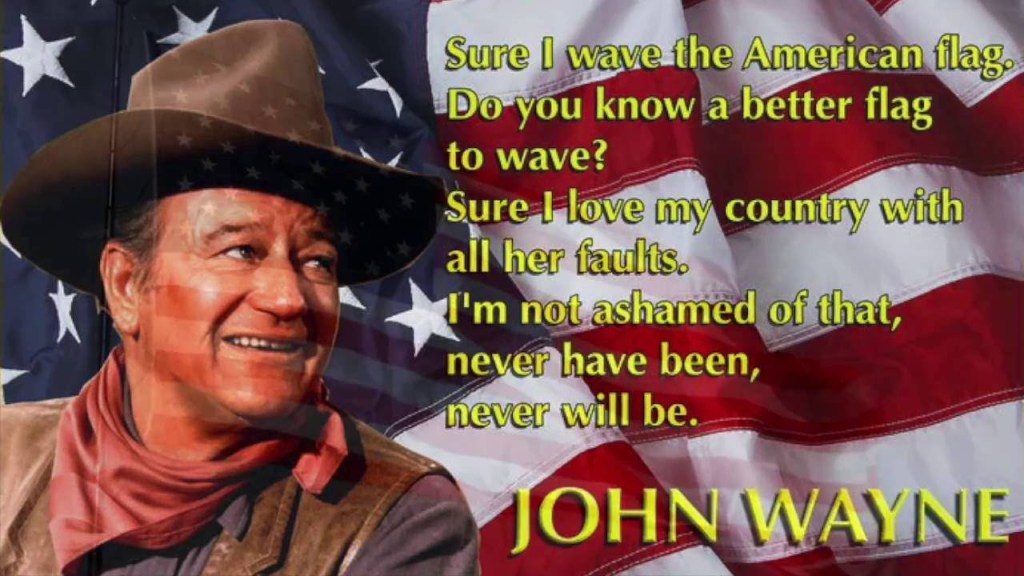 There is nothing that is beneath the left now that Trump Derangement Syndrome and cultural Marxism have combined to make for a nasty bitch’s brew that is being used to piss on everything that is decent in this once great country.

Not content to use their corrupt media to hack away at President Donald Trump 24/7, the legions of angry snowflakes have taken to tearing down statues, working to ban books and movies and now seem to be aiming to impugn the reputation of cinematic legend John Wayne from the sickening swine on the left.

The cultural elitist magazine The Atlantic shoots The Duke in the back by attempting to package a book review on the collaborations between Wayne and the legendary western Director John Ford into the exact type of smarmy liberal assault on American values that have now become customary.

Any idea that this is NOT a biased essay can be dispensed of by visiting the author’s Wikipedia page where it makes it clear that Stephen Metcalf is not only a regular contributor to the far-left website Slate but that he also served as a speechwriter for Hillary Clinton.

The following is excerpted from the Atlantic’s “How John Wayne Became a Hollow Masculine Icon”:

The actor’s persona was inextricable from the toxic culture of Cold War machismo.

John ford first noticed him in 1928, herding a flock of geese on the set of Mother Machree, an otherwise forgettable shanty-Irish weepie. The kid was huge, but innocent—or at least innocent-seeming. He had (he later claimed) “no desire” to be an actor. He was just a college football player earning spare cash as a property boy, an extra. Ford noticed him, but concluded that he wasn’t ready. (“I wanted some pain written on his face to offset the innocence.”) Looking at a still from 1930, you see immediately that Ford was right: He is soft and creamy, a “come-hither” carved out of a half-baked cheesecake. It was Raoul Walsh who finally cast him in his first lead role, in The Big Trail, released in 1930, and who told him, after consulting with the studio bosses, to change his name to John Wayne.

The Big Trail bombed—magnificently, on the scale of Cleopatra and Heaven’s Gate—and this sent Wayne back to Hollywood purgatory. He made dozens of Westerns for the so-called Poverty Row studios, disposable Saturday-matinee “oaters” for boys. (That Wayne endured making them for nearly a decade somewhat belies his claim of having no ambitions as an actor.) When Ford spotted him again, he was fishing off a pier in Long Beach, a B-level player whose confidence was shot. Ford didn’t care; he prized men for their mateyness. He invited Wayne onto his boat, the Araner, and after a while added him to his inner circle. One day in 1938, Ford—an Academy Award–winning director now—tossed his hanger-on a script and, calling him an “idiot,” offered him the lead in Stagecoach.

In the long working “friendship” between the two men, unless I missed it, Ford never spared a kind word for his protégé. In fact, Ford was savage in his mistreatment of Wayne, even though—or because?—Wayne worshipped him. (“My whole set up was that he was my mentor and my ideal! I think that deep down inside, he’s one of the greatest human beings that I have ever known.”) From Stagecoach through Liberty Valance, their last Western together, Ford rode Wayne so mercilessly that fellow performers—remarkably, given the terror Ford inspired—stepped in on Wayne’s behalf. Filming Stagecoach, Wayne revealed his inexperience as a leading man, and this made Ford jumpy. “Why are you moving your mouth so much?” he demanded, grabbing Wayne by the chin. “Don’t you know that you don’t act with your mouth in pictures?” And he hated the way Wayne moved. “Can’t you walk, instead of skipping like a goddamn fairy?”

Schoenberger makes the case that we are confused about masculinity because we cannot accept men like Wayne as heroes. In flight from machismo, we have largely given up on adult male self-mastery. But isn’t it also true that, allowed at last to be confused about masculinity, we no longer accept men like Wayne as heroes? Schoenberger herself alludes, perceptively, to “functional masculinity,” and if I read her right, this is the core of her provocative argument. Masculinity as puerile male bonding, as toxic overcompensation and status jockeying—this is what’s unleashed when masculinity no longer has an obvious function. Divorced from social purpose, “being a man” becomes merely symbolic. So, for example, robots in factories and drones on the battlefield will only make gun ownership and mixed martial arts more popular. To push the thesis further, as men become less socially relevant, they become recognition-starved; and it is here that “being a man” expresses itself most primitively, as violence.

The invention of John Wayne—is there a more primal scene of masculinity being stripped of utility and endowed with dubious political karma? If it was his idol’s cruelty, more than anything, that converted the beautiful boy in buckskins, with the wavy pile of hair and not a line of experience written on his face, into a Cold War icon, then we would do well to understand that cruelty.

In addition to the hatchet job on Wayne, the author insinuates that Ford was a homosexual and an anti-Semite.

The main beef seems to be that John Wayne – a staunch conservative – hated communists of the type that Hollyweird was teeming with at the time and now that the conman Bernie Sanders and his fellow Democrats have introduced a whole new generation to socialism, will likely be filled with again and soon.

True that Wayne was macho to a fault and was a real man in a time when that was a virtue but even with the liberals, there was never a question of which bathroom to use to pee in. It seems like Hillary’s former speechwriter is a bit swishy and perhaps that is the underlying factor behind his hostility to a great American cultural icon.

There’s nothing like kicking a man when he’s dead.