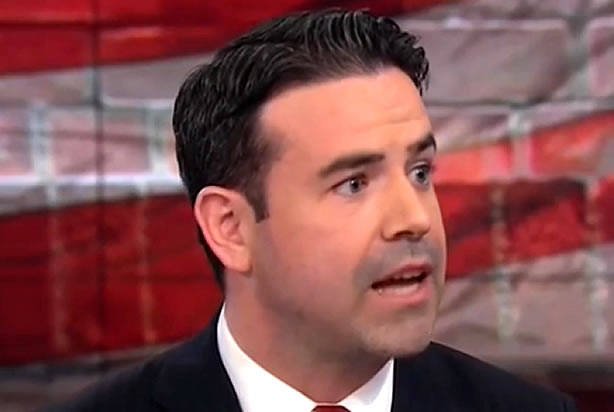 A former spokesman for failed presidential candidate Hillary Clinton tweeted an ugly racial attack yesterday against Ed Gillespie, the Republican nominee for governor in Virginia.  With polling bouncing all over the place — Gillespie has either surged into the lead, or is still on track for a decisive loss, depending on which survey you look at — his campaign has spent a fair amount of energy attacking Democrat Ralph Northam on immigration, for being soft on crime, and for coming out in favor of tearing down Confederate war monuments. President Trump tweeted in support of the GOP ticket, citing the latter cultural flashpoint:

Ed Gillespie will turn the really bad Virginia economy #'s around, and fast. Strong on crime, he might even save our great statues/heritage!

Over to you, ex-Hillary flack, Brian Fallon:

This is a disgusting, laboratory-pure ‘End of Discussion’ smear, that casually conflates opposition to ripping down confederate memorials with genuine white supremacy.  A few thoughts:

(1) This is how we got Trump.  Many Republican voters — and others — grew sick of the Left constantly slandering them as bigots, using motive-impugning demagoguery as a substitute for substantive argument.  Exasperated by this endless cultural bullying, the Right hired its own bully.  And the Left, learning zero lessons, keeps doubling down.  Lumping together the campaign of Ed Gillespie, a mainstream and mild-mannered conservative, and the “blood and soil”-chanting racists of Charlottesville (whom Gillespie slammed) is grotesquely unfair, and is deeply alienating to the overwhelming majority of non-racist conservatives in America.  It also waters down terms like “racism” and “white supremacy” by applying them so cynically as to cheapen their true meaning.

(2) This is out of touch and politically stupid.  A recent statewide poll of Virginians — who have gone blue in the last three consecutive presidential elections — showed that a considerable majority oppose tearing down Confederate statues and monuments.  By 17 points, voters are against the removal of monuments to Confederate leaders, just barely over one-third in support.  On the question of taking down other Confederate statues and memorials, the gap widens to 38 points, with less than one-fourth of Virginians in favor.  Not even a majority of black Virginia voters agree with the latter idea.  If liberals are tempted to write off this result as reflective of the “racist” South (setting aside Virginia’s blue tint), national results on these questions are strikingly similar.

(3) This is a fight Democrats started.  The notion that Gillespie shouldn’t exploit Democrats’ unpopular stance on an issue the Left has thrust upon the country is ridiculous.  If one side takes a shot in the culture war, and it’s a misfire, the other side is supposed to just honorably ignore that miscalculation?  Why?  Because “racism”?  Good luck with that.  And good luck winning elections if your strategy is to pretend that substantial majorities of voters are bigots if they disagree with your latest social justice project.  By the way, if we’re only supposed to adjudicate issues that leftists determine are “legitimate” (even if the “illegitimate” ones are ones they raised), here is Gillespie’s detailed economic and tax plan for Virginia.  Where’s Northam’s?  I’ll leave you with one of Gillespie’s television ads on the issue he’s not supposed to talk about: