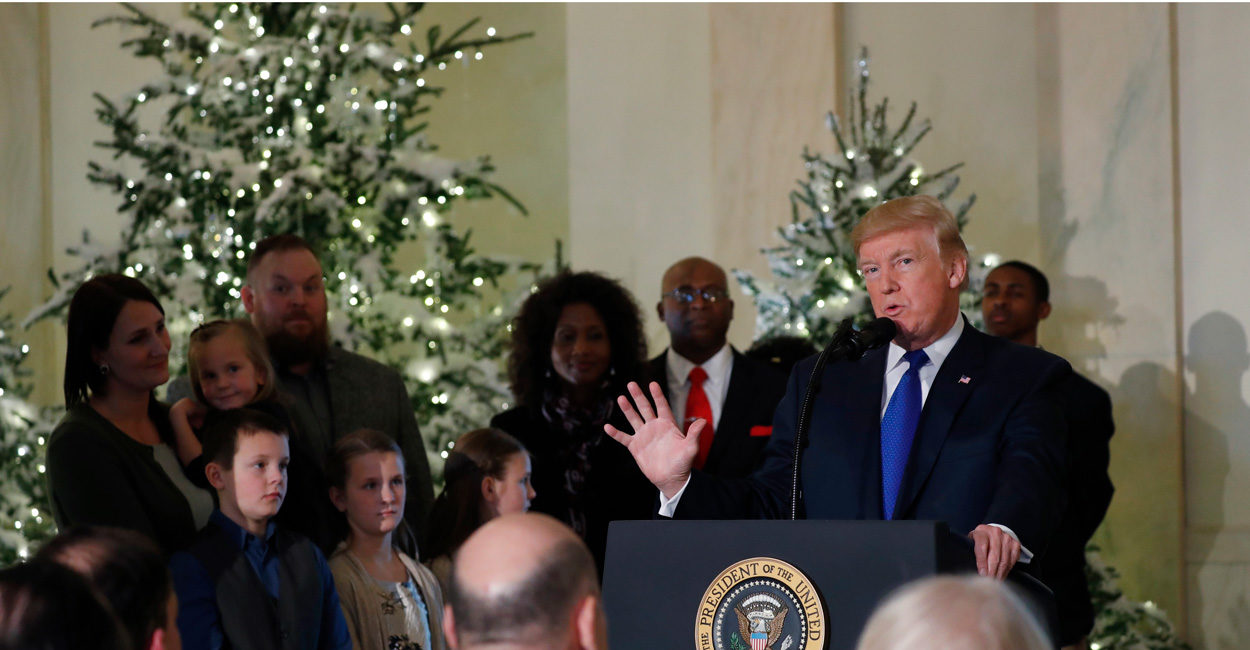 “Well done. Many of your predecessors promised this reform was coming. But you did it,” said Glick, of New Holland, Pennsylvania, attending a White House ceremony with his wife Ashley Glick.

The Glick family, who have two children and a third on the way, will go from a 15 percent tax bracket to 12 percent. With tax reform, their tax bill will go from $2,600 to $600, as Trump noted when he introduced the couple. Bryant Glick is a manager at a farm equipment store, while Ashley Glick works in health care.

“We are greatly excited about this,” Bryant Glick said. “With the tax savings we are going to see, we are going to put that money into home renovations. I’m excited that you are the one that got it over the finish line.”

Trump said Congress has reached a deal on an overhaul of the tax code to lower rates for individuals and businesses and eliminate loopholes.

While conference committee negotiators have hammered out differences between the House and Senate reform plans, the compromise must still be passed by both chambers—and could reportedly get a vote as early as next week.

“We are reclaiming our destiny as Americans, as a nation that thinks big, dreams bigger, and always reaches for the stars,” the president said. “We didn’t become great through massive taxation and Washington regulation.”

Trump didn’t talk about details yet, but said if Congress sends him a tax reform bill by Christmas, Americans will see fewer taxes taken out of their paychecks by February 2018.

“As a candidate, I promised we would pass a massive tax cut for the everyday, working Americans who are the backbone and heartbeat of our country,” Trump said. “Now we are just days away from keeping that promise and delivering a truly amazing victory for American families. We want to give you the American people a giant tax cut for Christmas.”

“Our current tax code is burdensome, complex, and profoundly unfair—it has exported our jobs, closed our factories, and left millions of parents worried that their children might be the first generation to have less opportunity than the last,” Trump said. “I am here today to tell you that we will never let that happen.”

Both the House and Senate passed plans that would reduce the corporate tax rate from the highest in the industrialized world at 35 percent to 20 percent, the Associated Press reported. However, to make up for revenue, House and Senate negotiators decided on 21 percent.

The change will have some impact on growth, said Adam Michel, policy analyst for economic studies at The Heritage Foundation. Estimates showed the difference between a 20 percent rate and a 22 percent rate would mean a reduction in economic growth of 10 percent, Michel said.

“This could cut into the growth that Americans were promised, but it is still a big improvement,” Michel told The Daily Signal.

Michel was encouraged by initial reports that the top individual rates will go down from 39.6 percent to 37 percent. Under the House plan, the top rate stayed the same and the Senate plan only lowered it to 38.5 percent.

Critics of tax reform raised concerns about the debt and deficits.

“That concern is overblown,” Michel said. “It is a pro-growth plan and will recoup most, if not all, of that revenue.”

The House and Senate bills rolled back the deduction for state and local taxes but allowed for a $10,000 property tax deduction. This deduction faced criticism for essentially subsidizing high-tax, high-spending states to the detriment of fiscally responsible states.

The House and Senate negotiators also are lowing the mortgage interest deduction from $1 million to $750,000. The House bill proposed to cap the mortgage on $500,000 homes, and the Senate bill kept the entire deduction in place.

During a meeting, while making public comments, with some of the conferees at the White House earlier, Senate Finance Committee Chairman Orrin Hatch, R-Utah, said, “We’ll get it done.”

During the meeting, Trump thanked Hatch and House Ways and Means Committee Chairman Kevin Brady, R-Texas. But, in a vague reference to the failed effort earlier this year to repeal and replace Obamacare, Trump sounded a note of caution.

“You guys have been just really, really amazing,” Trump said. “Although I shouldn’t say that until we sign. We’ve been there too many times. Let’s count the vote first. Right?”