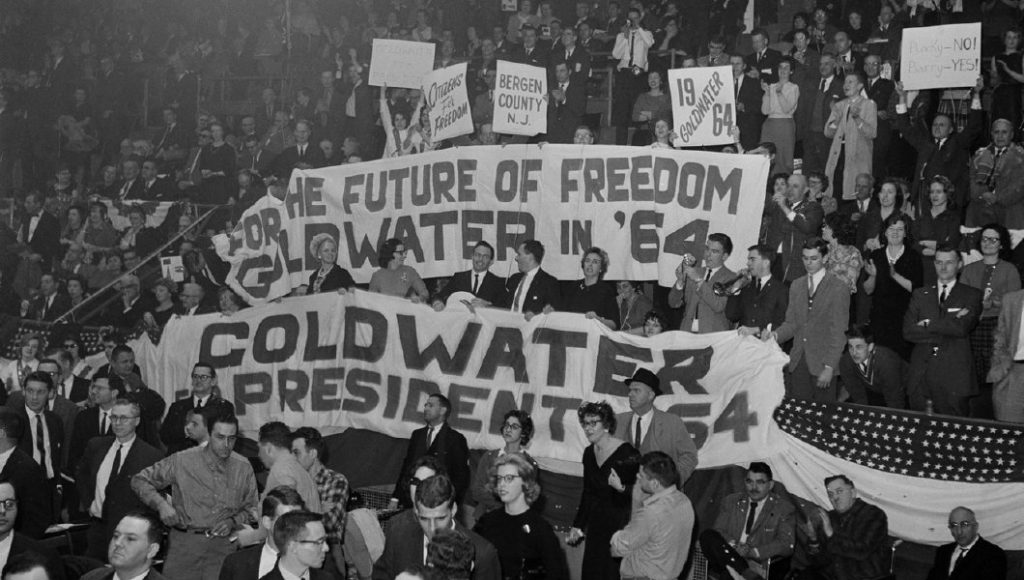 Arnold Steinberg works in the business of politics and fights in the battle of ideas. He is a campaign consultant, and “Whip-Lash: From JFK to Donald Trump” chronicles wonderfully his professional life.

It is a fat, fascinating book with a big index—a long alphabetical lineup of Hollywood stars, business entrepreneurs, and major politicos. Sprinkled throughout are pithy paragraphs on race and religion, progressivism and the administrative state, and the interminable tensions between libertarians and conservatives.

Spanning over five decades of American political history, Steinberg relates how he, along with many youngsters, was inspired by President John F. Kennedy’s election, demoralized by Arizona Sen. Barry M. Goldwater’s defeat, re-energized by the rise of Ronald Reagan, and stunned by the unlikely triumph of Donald Trump.

Steinberg, a California native, got his start in politics navigating the busy intersections where radical ideologues, Hollywood big shots, and powerful politicians routinely collide. Formulating a winning strategy, marshaling the money, and finding the talent to win a major campaign always takes brains, sometimes guts, and a fair bit of good luck. Competent polling is crucial, and impossible without accurate population samples.

While Democrat pollsters are deficient in under-counting the working class “deplorables,” Steinberg observes, their Republican counterparts rely on samples that are often “ … too white, too old, and too married.”

It was in New York, not California, where Steinberg faced his biggest professional challenge, helping to engineer a stunning upset: the election of James L. Buckley, the Conservative Party candidate, as New York’s senator in 1970.

New York was, and is, an epicenter of America’s racial, ethnic, and religious diversity. Blunt partisan politics does not, and cannot, work. Electoral success required retail salesmanship:

The Buckley campaign and incumbency exposed subtle differences in ethnicity that would make my future campaigns a piece of cake. In New York City, it was not just the Italians, but Northern Italians and Southern Italians; different police associations for Catholics, Jews, and blacks, and every nationality or ethnic group seemed to have its own parade—St. Patrick ’s Day Parade for the Irish, Pulaski Day for the Poles, Steuben for the Germans. The Jewish Community had Reform, Conservative, and Orthodox leaders. Jim had more in common with Orthodox Jews than liberal Catholics.

During the course of his professional life, Steinberg’s clients included California Rep. Robert K. Dornan (for whom this reviewer worked as a senior legislative assistant). Dornan was a brilliant orator, the author of innovative amendments, and a fearless floor fighter for outnumbered House Republicans.

Steinberg also helped Richard Riordan, who would become the Republican mayor of Los Angeles, California. Steinberg’s most intriguing client, however, was Clint Eastwood, who campaigned to become mayor of the tiny town of Carmel, California.

Eastwood’s stature as an international box office sensation impressed the locals not at all. Twenty points down in initial polling, Eastwood turned his fortunes around because of his passion for detail.

A model of self-discipline, he religiously followed Steinberg’s advice: “I watched one coffee. He asked for an evaluation and ideas. I learned what it was like to work with a consummate actor. He absorbed all my suggestions precisely and wove them into the next presentation and Q&A seamlessly.”

Throughout the book, Steinberg emphasizes that practical politics is, ultimately, a venue for the triumph of ideas. “After I entered UCLA,” he writes, “there was always a tension that never subsided in my mind. Between philosophy and ideas on the one hand and politics and campaigns on the other. Politics seemed a holding action, a finger in the hole of a dam. We had to change the thinking of people.”

Steinberg’s political transformation followed a familiar pattern. Many young Americans were originally attracted to politics in the excitement of Kennedy’s 1960 campaign. For millions of Americans (including the young) who were weary of the ensuing crises of 1960s and ‘70s, Reagan’s message of renewed hope was a tonic.

Meanwhile, the TV performances of the urbane and witty William F. Buckley Jr. defined cool. Buckley’s organization, Young Americans for Freedom, enlisted Steinberg and other collegians by the tens of thousands, and in 1980, those cohorts reorganized themselves into the Youth for Reagan, the ground troops of the Reagan Revolution. Leftist students organized protests. Conservative kids worked the precincts.

Steinberg’s observations on the American Jewish experience enrich the book. The rise of anti-Semitism on the left, particularly on university campuses, today exacerbates political tensions within the traditionally liberal Jewish community. Whether emerging from the left or right, says Steinberg, it is the same old “Jew hatred.”

Though Jews historically voted Democratic, the groundbreaking academic work of Jewish intellectuals, such as Milton Friedman, Ludwig von Mises, Israel Kirzner, Leo Strauss, and Will Herberg, greatly contributed to the conservative intellectual resurgence of the 1950s and ‘60s.

American Jews embracing Orthodox religious observance, Steinberg notes, also gravitate toward political conservatism. He cites the fact that today, the Orthodox account for a stunning one-third of Jewish children, even though they comprise only 10 percent of the American Jewish population.

As the son of Polish immigrants growing up in Los Angeles’ Jewish neighborhood, Steinberg’s personal story naturally resonates with many second- and third-generation Americans, whose parents and grandparents came to the United States in the early 20th century. In America’s big cities, Irish, Italian, and Eastern European kids were the progeny of the millions who came to America seeking work and a better life.

When Reagan summoned his fellow citizens to restore the republic as a “shining city on the hill,” he touched the minds and hearts of millions. Reagan’s vision not only inspired the rising generation, it also validated the sacrifices, the hopes, and the dreams of their parents and grandparents.

When Steinberg entered the political fray in the ‘60s, the left represented the “counter-culture.” Today, he observes, the left literally owns “the culture”—the arts and academia, Hollywood and the media, corporate philanthropy and the big foundations: “It is the leftist conventional wisdom that is all around us.” Working the precincts is crucial, but reclaiming the culture is ultimately more important.

In a revolutionary era, today’s conservatives are agents of freedom and champions of the new “counter-culture”—defiant dissenters from the conventional wisdom. That is exactly how it should be.