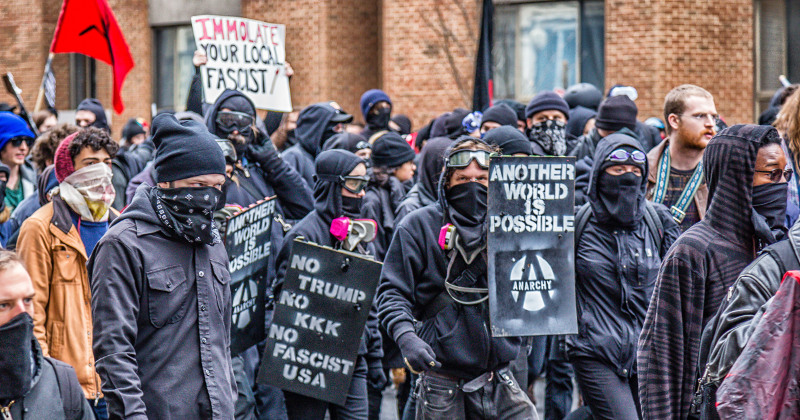 The Left interferes in immigration law enforcement — and plans to escalate its lawlessness.

The anarchist thugs of Antifa are branching out into obstructing immigration law enforcement, apparently no longer content with shutting down conservative speakers and beating up those they promiscuously label “fascists.”

A case in point was last Thursday, Feb. 15, when about 70 activists surrounded a U.S. Immigration and Customs Enforcement (ICE) van that was attempting to enter the Metropolitan Detention Center in Los Angeles. The anarchists chanted “no more deportations,” “Trump and Pence must go,” “f–k ICE,” as well as slogans in the Spanish language.

Although the two ICE agents in the van at the time were unharmed and there were no arrests, the action was viewed by anarchists as a successful test of the tactic. Antifa intends to expand its use of the approach. Given Antifa’s ugly track record, this could mean violent, terroristic attacks on law enforcement.

The nighttime action was leftist retaliation for ICE officers doing their jobs by enforcing the law. ICE reportedly detained more than 200 illegal aliens in Los Angeles during a recent five-day enforcement sweep.

Radical leftist Rabbi Aryeh Cohen bitterly complained to the Los Angeles Times about ICE doing what it is supposed to do.

“The original goal was to really loudly proclaim that we’re not going to stand for ICE destroying families … on Valentine’s Day of all days,” said Cohen, who is on the board of Clergy and Laity United for Economic Justice, which helped to publicize the action.

“When the ICE/DHS van came, our group of people decided it was time to put their bodies in front of the machinery of deportation,” he said.

ICE had no choice but to carry out the raids, according to ICE Deputy Director Thomas Homan.

Because sanctuary jurisdictions like Los Angeles prevent ICE from arresting criminal aliens in the secure confines of a jail, our officers are forced to conduct at-large arrests in the community, putting officers, the general public and the aliens at greater risk and increasing the incidents of collateral arrests.

California, which is thought to be home to more than 2 million illegal aliens, has declared itself a “sanctuary state.” A state law took effect Jan. 1 that dramatically curtails the power of state and local law enforcement to hold, question, and transfer detainees at the request of federal immigration authorities. It also penalizes employers for cooperating with ICE.

The bizarre, almost certainly unconstitutional, law has been attacked as “unconscionable” by U.S. Attorney General Jeff Sessions who is trying to block federal crime-fighting grants from flowing to sanctuary jurisdictions.

The sanctuary movement gave illegal aliens permission to rob, rape, and murder Americans by, among other things, stigmatizing immigration enforcement. Some left-wingers call sanctuary jurisdictions “civil liberties safe zones.” The phrase blurs the distinction between citizens and non-citizens, implying illegal aliens somehow possess a civil right to be present in the U.S. These sanctuary cities really ought to be called traitor cities because they are in open rebellion against the United States.

Two local Antifa groups, the Koreatown Popular Assembly and the Los Angeles chapter of Refuse Fascism, participated in the picket line Thursday that eventually broke up after police ordered the crowd to disperse.

Antifa are the self-styled anti-fascists who embrace fascist tactics and have gained new prominence in the post-Obama era. They trace their roots back to Nazi Germany. Although they opposed the Sturmabteilung (SA), or Nazi storm troopers, they also used violence to intimidate political opponents and break up their meetings and rallies. It could be argued that the ideological distance between Antifa and the now-defunct National Socialist German Workers’ Party (Nationalsozialistische Deutsche Arbeiterpartei, abbreviated as NSDAP) or Nazi Party, is so slight it can be measured in millimeters.

Refuse Fascism held a rally in support of the action last week that was headlined by Refuse Fascism organizer Michelle Xia. Xia shouted into a megaphone, mustering an array of hoary agitprop clichés.

The Koreatown Popular Assembly organized the action against law enforcement in response to the Trump administration’s “mass escalation of raids by ICE” on so-called sanctuary cities “as punishment for not cooperating with immigration authorities,” according to an article attributed to the Black Rose Anarchist Federation on the anarchist website It’s Going Down.

This is why it is essential to organize a popular response and resistance to targeted raids which are intended to strike fear in and demobilize immigrant communities. Even the small act of blocking a single van with two officers inside shows that it’s possible to disrupt ICE’s activity in Los Angeles and organizers are looking to expand this tactic.

Employing the kind of language Marxist agitator Saul Alinsky used, the article held up the Koreatown Popular Assembly as an inspirational example of participatory democracy in action.

It is significant that these actions are not the efforts of stand alone activists or NGO [i.e. nongovernmental organization] directed staff but a result of discussion, debate and decision making by a base of everyday people choosing the priorities based on their immediate reality and needs. The Koreatown Popular Assembly is still small and embryonic but stands out as an example of how radicals can move beyond isolated projects and work to build popular power from below.

The Koreatown Popular Assembly used the same tactic of obstruction against ICE the month before, the article stated. It created a “Rapid Response Network that mobilized together with other groups on January 18 to surround a neighborhood 7-Eleven and prevent ICE from returning to the neighborhood to obtain documents from the store manager.”

Although the convenience store’s manager later met with ICE officials elsewhere, “the mobilization successfully prevented ICE from entering the neighborhood as a form of community intimidation.” This kind of mobilization constitutes “counter intimidation to ICE.”

In other words, this is a case of Antifa mob rule versus the rule of law.

The article performs a rhetorical sleight-of-hand by dubbing those conspiring to obstruct law enforcement as “first responders,” in a creepy attempt to confer a kind of legitimacy on network operatives. This dreadful euphemism is a perversion of language calculated to boost the image of these lawbreakers, and ought to enrage real first responders who save lives such as ambulance personnel, firefighters, and police.

With over a year of preparation and training the hotline is staffed with around 30 dispatchers who volunteer to do two to three 4-hour shifts a week. In turn the network has trained nearly 100 first responders who are registered based on geographic areas and dispatched with text messages via an open source software platform.

Whether any of the “first responders” are themselves illegal aliens is unclear.

As for Xia’s group, Refuse Fascism, its goal is to overthrow the U.S. government through occupations and crippling strikes. The activists and their tactics are examined in Antifa, the third leg of the documentary film series, America Under Siege, by Dangerous Documentaries and Cohesion Films. (I am one of two executive producers of the series. Dangerous Documentaries is Capital Research Center’s movie studio.)

Refuse Fascism is a project of the Revolutionary Communist Party, according to KeyWiki, Trevor Loudon’s online encyclopedia of politics. Among its founders are Cornel West and unrepentant domestic terrorist Bill Ayers.

Refuse Fascism prefers Kim Jong-un over Donald Trump, siding with the gulag-filled Stalinist hermit state of North Korea that has threatened to incinerate the American homeland with nuclear weapons. The group has organized demonstrations against the Trump administration that have turned violent, including those around Inauguration Day a year ago. The group also spouts pro-North Korean propaganda talking points.

Antifa groups are going to need money if they wish to escalate their activities against ICE and the Trump administration.

Chances are, George Soros will oblige them.