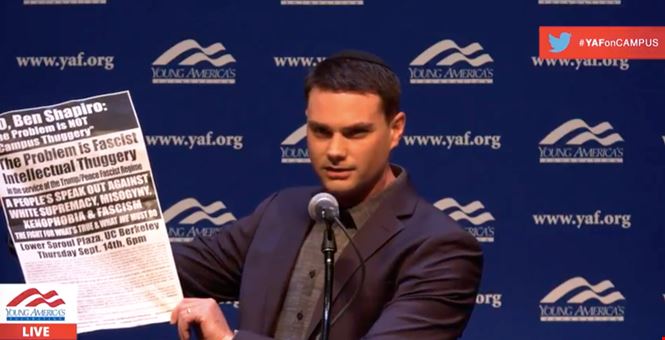 Well, the day has come and gone. Conservative commentator Ben Shapiro delivered his speech at Berkeley after doling out thousands of dollars in security fees, which has been viewed as a mechanism from which liberal institutions can silence conservatives from speaking. Who has $15K lying around? That was the rough estimate of the bill Shapiro paid to just give a speech in the belly of the liberal beast.

The school has recently been at the center of free speech controversy, especially when progressive thugs rioted after shutting down a speaking engagement by Milo Yiannopoulos in February. Shapiro did thank the UC Berkeley administration, despite the hurdles, for allowing him to speak and, as he said, unshackling the police so that a repeat of what had occurred on campus doesn’t happen again. Shapiro also noted the oddity of having to spend this much money and have this much controversy surrounding this speech when he said the exact same thing in 2016. The exceptions being there were only a couple of security guards and zero controversy. Shapiro’s event, called “campus thuggery,” wasted no time going after the stupidity of progressives, specifically Antifa, who tried to shut his lecture down. The speech began at 10 p.m. EST, 7 p.m. PST. It was slated to be a two-hour event. It’s featured below (via The Hill):

“Thanks to antifa and the supposed anti-fascist brigade for exposing what the radical left truly is,” Shapiro said in his speech, referring to anti-fascist or “antifa” activists.

“All of America is watching because you guys are so stupid. It’s horrifying, I am grateful, and you can all go to hell, you pathetic, lying, stupid jackasses,” he said.

These are the folks that stand between civilization and lawlessness,” Shapiro said of the police, saying they are “the only people who are standing between those ATMs and the antifa are the police, and all they get is from the left is a bunch of crap.”

He also played on the Left’s antics regarding lobbying accusations of white supremacy on him, in which he pointed to his yarmulke, noting that the alt-right doesn’t like him either. Yet, in the context of leftist attacks, if you disagree with them on anything, you’re racist, a white supremacist, a Nazi, or a fascist. Therefore, you deserve to be beaten up. It’s part of the insane notion that speech can be violent.

Blessedly, this event saw no fires or riots. Four people were arrested for carrying weapons. One of the methods of crowd control that was permitted by police was the use of pepper spray, which apparently was banned back in 1997. The city itself doled out $600,000 to ensure law and order was maintained. Parts of campus were cordoned off with concrete barricades (via LA Times):

Hundreds of protesters swarmed UC Berkeley on Thursday evening as conservative writer Ben Shapiro spoke on campus, with law enforcement out in force to prevent a repeat of recent violent clashes between far-left and far-right agitators.

At least four people were arrested for carrying banned weapons. One was also held on suspicion of battery on a police officer. Hundreds of law enforcement officers, many in riot gear, prepared for violence and seized potential weapons. But as of 10 p.m., no major skirmishes had been reported. Several shouting matches erupted but ended peacefully.

A campus spokesman said there is a “sense of relief” that the preparations worked and Shapiro’s speech went smoothly.

The intense security for the evening came with a $600,000 price tag, and involved shutting down and clearing out large swaths of the campus.

Days earlier, Berkeley Police Chief Andrew Greenwood successfully lobbied the City Council to adjust a 1997 ban on the use of pepper spray as a crowd-control technique. Officers Thursday were free to use pepper spray on individual protesters deemed violent.

The Mercury News also added that this was a test run for the school, which did not want a repeat of the chaos that has engulfed the city in recent months:

This event is a test run for the campus. Later in the month, from Sept. 24 to Sept. 27, a number of controversial speakers, including Milo Yiannopoulos and former White House chief strategist Steve Bannon, are expected to descend on campus for what the student group Berkeley Patriot is dubbing a “Free Speech Week.”

When Yiannopoulos last tried to speak on campus in February, demonstrators turned violent, smashing windows and throwing objects, and the school canceled the event. Conservative student groups, backed by national conservative organizations, accused the school of limiting conservative free speech and even filed a lawsuit against the university alleging as much.

Former Chancellor Nicholas Dirks was criticized for his handling of the situation, and new Chancellor Carol Christ has made a point of pledging to support free speech this year. Earlier this month, she hosted a faculty forum on the topic, with both liberal and conservative faculty weighing in on how the school should handle such events.

One last note, God bless the Young America’s Foundation and all that they do to protect free speech, give conservative students a place to voice their views and engage in activism, and add some conservative flavor to the putrid rot of progressivism that’s infested America’s colleges. Well done, YAF. Keep fighting.