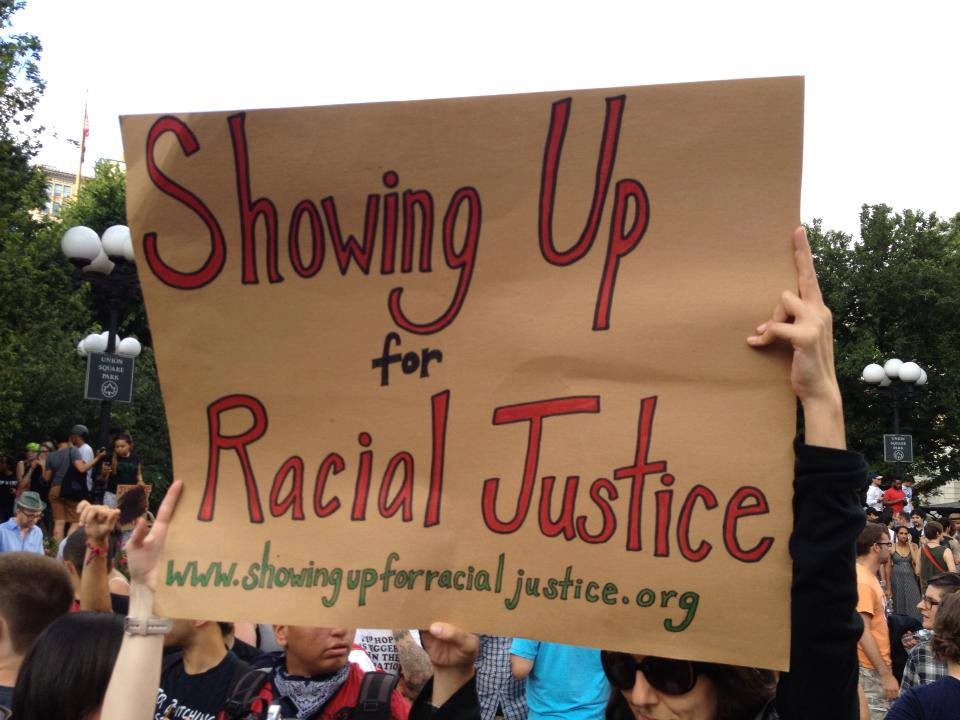 Liberals hate everything with one exception: they love trying to ruin every single holiday from Arbor Day to Zip Code Day (yeah, that’s a real thing. It’s July 1st). Thanksgiving however my be their favorite occasion to shit all over because it involves family get-togethers and they have a serious problem with happy families. One black group wants to destroy whitey’s turkey time by encouraging progressive whites to yell at their relatives about racism at the Thanksgiving dinner table. They have even set up a hotline to instruct guilty white liberals on the proper way to make everything as uncomfortable as possible.

Showing Up for Racial Justice (SURJ) is a group of black people (no whites allowed) who instruct white people on how to check their white privilege or something like that. For Thanksgiving they have set up a hotline to help, “white folks in having tough conversations with other white folks.” No, really.

Here’s how it works:

When you get stuck during Thanksgiving conversations, SURJ has you covered. Simply text SOS to 82623, and we’ll send you some key talking points that tend to come up in these tough conversations. It’s vital for white people to break white silence about the danger of Trump’s presidency — we we’ll make sure you have the tools you need to have those conversations over the holidays!
And just in case you are too drunk or stupid to type in words, you can literally just text them a turkey emoji and they will come to the rescue. 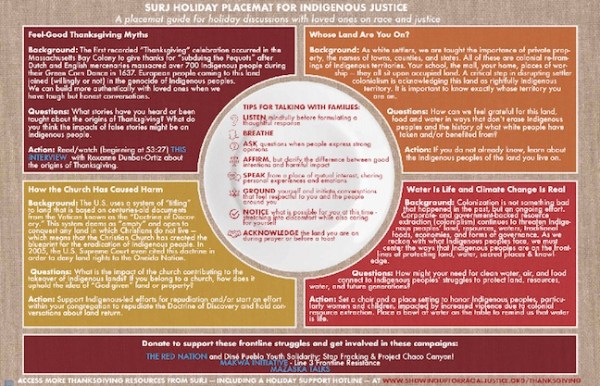 So what exactly will the SURJ hotline help you with? Stuff like this:

All white folks need to have difficult conversations, including/especially those of us who see ourselves as “progressive.” We need to talk about the truth of the ongoing colonization of Turtle Island— an Indigenous term for “North America” — and the founding of the U.S. Those conversations are opportunities to discuss what we can do to address ongoing colonialism.

In reality, Thanksgiving is a day that celebrates a massacre of Indigenous
peoples, not unity with Indigenous peoples. Many “Thanksgiving” celebrations took place in various locations throughout the colonies and at different times of the year, each celebrating a specific massacre carried out against the local Indigenous peoples of that area.

European people coming to this land joined (willingly or not) in the genocide of Indigenous peoples.

The last year has been filled with both an emboldening of white supremacy and an increasing number of people coming into movements to create something different. We cannot expect that justice will ever come if we are not willing to face the injustices of our past and present.

SURJ even has a printable placemat with all of these racism talking points and it includes some bullshit about global warming in case you really want to make Thanksgiving unbearable for all of your loved ones.

Every year liberals issue these talking guides for dealing with right-wing relatives over the holidays because all liberals claim to have that one racist uncle that nobody wants to talk to. I have news for these people: they are the ones nobody in the family wants to talk to. They are the ones who ruin Thanksgiving dinner by turning it into a leftist ideology shouting match. Here’s a better guide for liberals to follow this holiday season: STFU and eat some turkey.