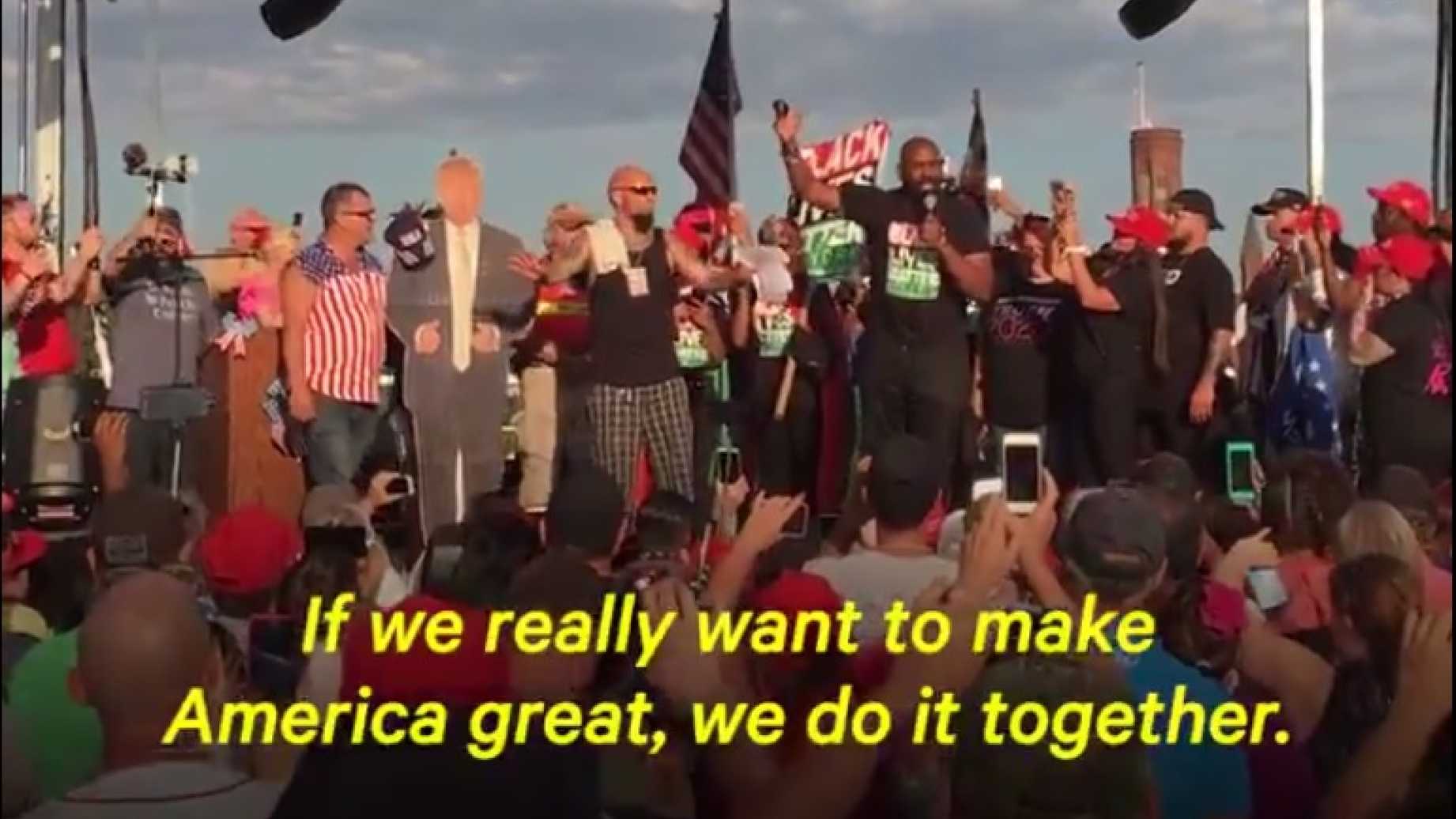 Pro-Trump rally gives BLM leader the stage to honor freedom of speech. What happens next no one saw coming.

​The clash between a Black Lives Matter group and a pro-Trump rally in D.C. over the weekend went a direction that no one on either side saw coming. In a rather remarkable moment highlighted by Now This, the leader of the BLM group was unexpectedly invited to take the stage at the pro-Trump/pro-free speech rally and given the floor for a few minutes. By the end of the talk, the two initially hostile groups ended up cheering alongside each other.

The incident started when the BLM group marched near the stage of the pro-Trump rally. The protesters, some of whom were carrying signs and wearing symbolic slave chains, chanted “Black Lives Matter!” amid boos from the Trump supporters. Though one of the pro-Trump rally organizers first urged the crowd to ignore the protesters, saying, “Don’t give them the spotlight. They don’t exist,” another organizer stepped forward and did something totally unexpected.

“I’m going to let Black Lives Matter come up here while I show them what patriotism is all about, all right?” he announced.

Hank Newsome, leader of Black Lives Matter New York, took the stage, while another organizer announced on the mic that he was going to give the protest group a chance to give their message.

“It’s about freedom of speech. It’s about celebration,” said the Trump rally organizer. “So what we are gonna do is not something you’re used to, and we’re going to give you two minutes of our platform to put your message out. Now, whether [the crowd disagrees or agrees] with your message is irrelevant — it’s the fact that you have the right to have the message.”

Members of BLM then took the stage, several holding their fists in the air in the black power gesture, while the leader of the group began speaking.

“I am an American,” the BLM leader began. “And the beauty of America is that when you see something broke in your country, you can mobilize to fix it.”

The statement was met with some cheers from the crowd.

“So you ask why there’s a ‘Black Lives Matter?’ Because you can watch a black man die and be choked to death on television, and nothing happened. We need to address that,” he said.

In response, some of the people at the rally yelled, “That was a criminal!” and “Shut up!”

“We are not anti-cop!” Newsome insisted.

“Yes you are!” some in the audience replied.

A bunch of the people in the audience cheered and clapped at that line.

“We don’t want handouts, we don’t want anything that is yours,” he continued. “We want our God-given right to freedom, liberty, and the pursuit of happiness!”

That line earned loud cheers and applause. Responding to some in the crowd calling “All Lives Matter!” Newsome agreed.

“You are so right, my brother, you are so right. All lives matter, right?” he said. “But when a black life is lost, we get no justice. That is why we say black lives matter. If we really want America great, we do it together.”

The pro-Trump crowd loudly applauded in response and broke out into a chant: “USA! USA!”

These Black Lives Matter activists were invited on stage at a pro-Trump rally – and every American needs to hear what they said pic.twitter.com/m69yvgiQtw

After the event, Newsome said, “It kind of restored my faith in some of those people, because when I spoke truths, they agreed.”

“I feel like we made progress,” he continued. “I feel like two sides that never listen to each other actually made progress today. Did I expect to go on that stage? No. I expected to come down here with my fist in the air in a very militant way, exchange insults, maybe some dirty looks, or who knows what. If not on a grander level, but just person to person, I think we really made some substantial steps, without either side yielding anything.”

He continued: “I hope they understand that one of the leaders of the Black Lives Matter movement is a proud American and a Christian, who cares deeply about the country and the people in it, whether they are documented or now. I want them to understand that we are educated, that we apply a strategy, but we come from a place of love. We really are here to help this country move towards a better place, not to destroy it.”