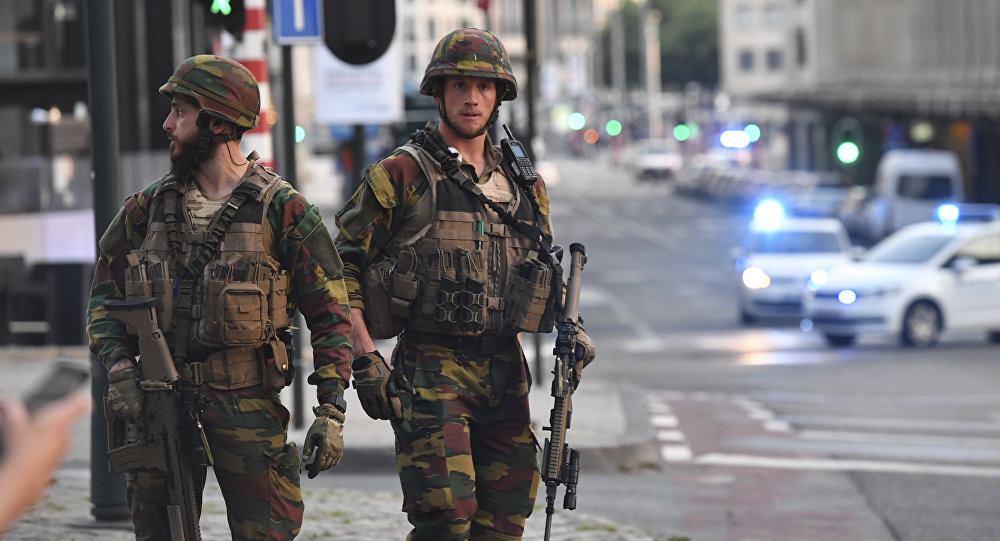 THE man behind the botched suicide bombing of a Brussels station lived in the notorious ISIS breeding ground of Molenbeek, authorities have said.

Named only as 36-year-old Moroccan and alleged sex offender O.Z., a Belgian prosecutor said he screamed “Allahu akbar” at soldiers and charged at them before being killed in a hail of gunfire.

Just seconds earlier he had tried to detonate his bomb next to dozens of commuters standing near a train information board.
Witness Remy Bonnaffe said: “There must have been some 20, 30 people spread around the screens there.”
Investigator Eric Van der Sypt added: “He grabbed his suitcase, while shouting and causing a partial explosion. Fortunately, nobody was hurt.”

When the suitcase – filled with two devices, nails and gas bottles – failed to explode a second time, he ran towards a soldier on the upstairs concourse shouting “Allahu akbar” but was gunned down immediately.

Van der Sypt continued: “It was clear he wanted to cause much more damage than what happened. The bag exploded twice but it could have been a lot worse.”

The country’s Prime Minister Charles Michel added: “We have avoided an attack that could have been a great deal worse.”
Belgian media said the attacker was a well-known sex offender, but was not on the radar of officials over links to terror.

Authorities also confirmed he had lived in Molenbeek – a notorious district of Brussels that was home to the terrorists behind the Paris attacks in 2015.

Forensic teams were this morning pictured at properties in the area of western Brussels.

No one else was injured in the blast as investigators confirmed they believe it was a terrorist attack.

Dramatic pictures emerging overnight showed a fireball engulfing the station’s concourse. It is believed to have been caused by the device’s detonator.

Witness Nicolas Van Herrewegen said: “There was a man shouting, and shouting and shouting.

“He was talking about the jihadists and all that and then at some point he shouted: ‘Allahu akbar’ and blew up the little suitcase he had next to him. People just took off.”

One Brit mum-of-three described how she was caught up in the “chaos”.

Rozina Spinnoy, 45, from Giffnock, Scotland, told the Daily Record: “Two policemen [came] towards me telling me in French to ‘get out, get out and go up the stairs.’

“Someone said to me it was a bomb and gunfire and I thought ‘oh my god’.

Prosecutors said the attacker was killed in the confrontation, but his body was left lying inside the station for several hours over fears he could be carrying explosives.

Dozens of police cars could be seen outside the station last night as the square outside was evacuated and a cordon put in place.
Passengers reported being told to leave the station and evacuated to a nearby restaurant.

Van Herrewegen, a railway sorting agent, also told AFP news agency he had gone down to the station’s mezzanine level when he heard someone shouting.

He said: “He cried ‘Allahu Akbar’, and he blew up a wheeled suitcase.

“I was behind a wall when it exploded.

“I went down and alerted my colleagues to evacuate everyone.

He (the suspect) was still around but after that we didn’t see him.”

He added: “It wasn’t exactly a big explosion but the impact was pretty big. People were running away.”

He described the suspect as well-built and tanned with short hair, wearing a white shirt and jeans.

The witness said: “I saw that he had something on him because I could see wires emerging, so it may have been a suicide vest.”
After reports of the blast were heard, a witness told RTL: “People are running everywhere.”

Another told the broadcaster: “Panic in the Gare Centrale. Shots heard.”

Arnaud Reyman, spokesman for Infrabel, the Belgian railway operator, said: “A crowd panicked in the station and ran for the tracks after an incident.”

The Belgian capital’s Grand Place, a major tourist site filled with restaurants and shops, was evacuated along with the station about 200m away.

Brussels has been on high alert since ISIS suicide bombers struck the city’s airport and metro in March 2016, killing 32 people and injuring hundreds more.

ISIS claimed the attacks, which were carried out by the same jihadist cell behind the November 2015 Paris attacks that killed 130 people.

Soldiers have been deployed at railway stations, government buildings and European Union institutions in Brussels since the aftermath of the Paris attacks when a link to Belgium was first established.

The country’s law enforcement agencies and intelligence services came under intense scrutiny for apparently missing a series of leads after the Paris attacks which could have led them to the Brussels bombers.

(First reported by The Sun)https://www.thesun.co.uk/news/3845043/brussels-bombing-terrorist-revealed-as-moroccan-sex-offender-molenbeek/   (June 21, 2017)