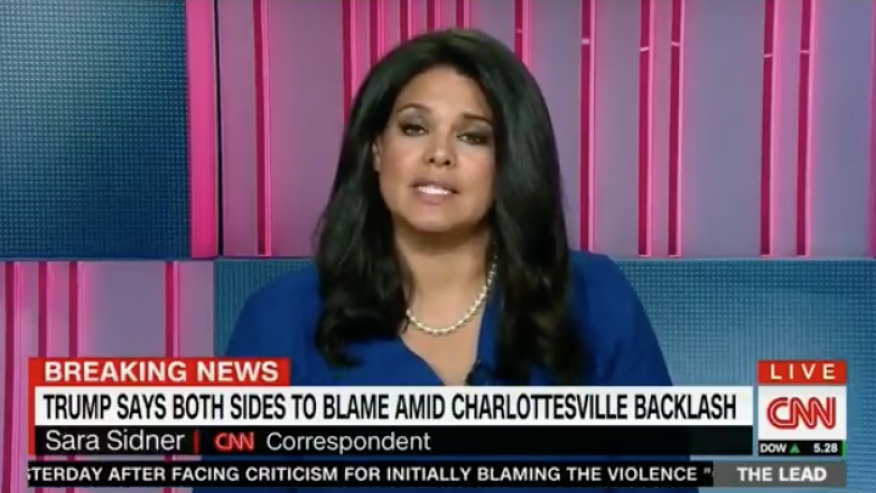 CNN correspondent Sara Sidner played the blame game on Tuesday, telling Jake Tapper that leftists wouldn’t have to get violent if their political opponents would just stay home.Sidner was responding to President Trump’s press conference where he squarely placed blame on both the alt-right and the alt-left for inciting violence. Though she did admit that Antifa is at least partially responsible for escalating the demonstration, she vociferously defended their tactics and chastised the other side for exercising their First Amendment rights to peacefully assemble:

“Okay, so, here’s the truth. The Antifa — there’s a group of anti-fascists called the Black Bloc who do tend to get violent. Their idea is, look, non-violence hasn’t worked and we are going to try and stop this. But they wouldn’t have been there — they wouldn’t have been anywhere near there — had it not been for the fact that white supremacists, neo-Nazis were out scaring the living daylights out of most of the people in that town.”

Sidner said that the president is emboldening white supremacists to become even more violent and emphasized how minorities are “literally terrified” that they will become the next victims.

To emphasize her point, Sidner read former klansman David Duke’s tweet after Trump’s presser saying white supremacists are “getting the message.” Duke thanked the president for having the courage to call out the violence coming from the Left. You may not like the messenger, but the truth needs to be acknowledged.

The Washington Free Beacon’s Alex Griswold asked, “By that logic, where does Ms. Sidner believe that Nazis should congregate that wouldn’t justify attacking them?”

Isn’t that like saying a woman wouldn’t have been raped if she didn’t dress that way? Isn’t victim blaming frowned upon by the Left?

If anything, the media and other leftists are inconsistent, to say the least. Who could forget the The New York Times blaming conservatives for making the Left turn violent against them on college campuses: