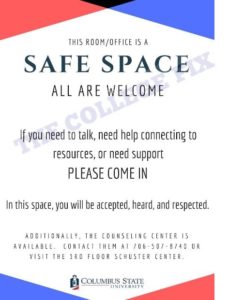 In May, Columbus State University proudly plugged “safe spaces” across its campus. “Safe Space” fliers were drummed up and posted. Announcements were sent out.

“Establishing safe spaces is an important step toward promoting one of our university’s core values – inclusion,” Gina Sheeks, vice president for student affairs, told a local news station at the time. “Our goal as a campus is to embrace diversity at all levels and create an environment where students, faculty and staff feel safe, supported and accepted.”

The posters read: “The room/office is a safe space. All are welcome. If you need to talk, need help connecting to resources, or need support, please come in. In this space, you will be accepted, heard and respected.” It also included contact information for the counseling center.

But not everyone was thrilled with the “Safe Spaces.” The administration requested that the fliers be taken down and for the theme to be changed from “safe spaces” to a we’re-here-to-listen theme.

John Lester, associate vice president for university and government relations, said in an email to The College Fix that the endeavor is not about creating safe spaces as they’re traditional understood in the modern vernacular, calling it “a noble effort that unfortunately got tangled up in a completely different narrative.”

The effort was the brainchild of students and the CSU Counseling Center, a response to a semester of various diversity initiatives dubbed the “Diversity & Inclusion Awareness Project 2017.”

In January, a survey was distributed to students, faculty and staff asking them to answer questions about their experiences of diversity and inclusion on campus. Multiple “Courageous Conversations” workshops were held. On March 30, Columbus State University hosted its annual diversity conference, which featured speakers and panel discussions devoted to diversity and inclusion.

According to an email obtained by The College Fix through a public records act request, the creation of safe spaces was a next step toward meeting diversity goals.

But as soon as the space spaces were promoted, and local news picked up on it, Columbus State leaders bristled.

Recently, “safe spaces” at universities have been viciously mocked by some on the right and left as infantilizing college students and not preparing them for the real world. Some safe spaces at other universities have included coloring books and Play-Doh.

In a May 16 email to Earl Ehrhart, a Republican state lawmaker who chairs Georgia’s higher education appropriations committee, Lester gave the chairman a heads up in an email with the subject line: “potential issue on our campus.”

“Every semester we hear stories of students who drop out of school, without talking to anybody. The counseling center was attempting to advertise to students that there are always faculty and staff willing to listen to their issues — be they financial, academic, emotional or social,” Lester’s email stated in part.

“There was no group that presented a list of demands. No protests. No one group was singled out. And it was not for any specific space. There were no rules distributed with these posters, nor were there any specific spaces assigned. These were distributed to all kinds of different offices around campus,” he added. “It was ill-timed and ill-named. We have since taken all these down and asked student affairs to work this again with something more appropriate, such as ‘I listen.’”

While Chairman Ehrhart agreed, calling the spaces “very ill named,” he seemed more concerned about the parade of diversity efforts the campus hosted over the spring semester: “Unfortunately these terms [diversity and inclusion] in the campus context have no bearing on the actual dictionary definition. They are words to hide the utter bigotry and non-inclusiveness of the academics who use them. They are used to hide their actual discriminatory nature of what they really are.”