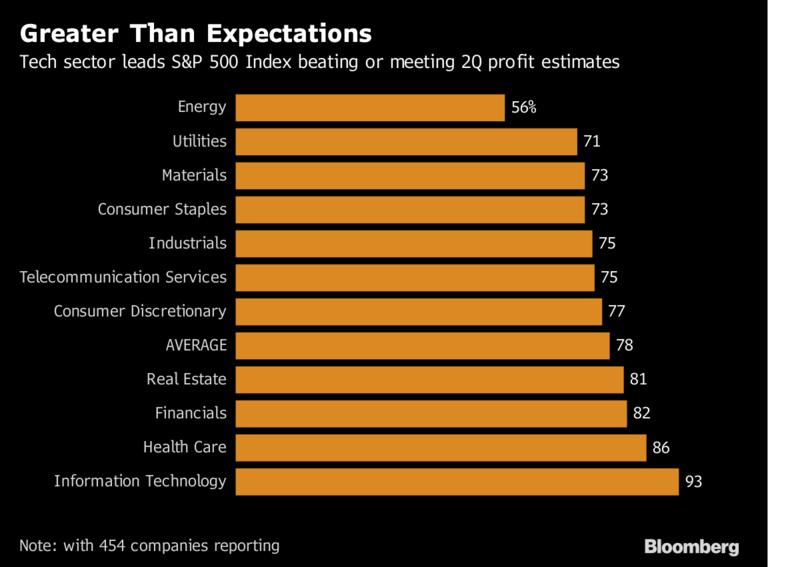 Overseas demand is driving the best earnings season for U.S. companies in 13 years, with top executives from Dow Chemical Co. to Morgan Stanley citing rising foreign sales, a dynamic that should help propel gains in the second half.

With nearly every global economy showing growth, corporate profits in the second quarter have beaten estimates at more than three-quarters of the Standard & Poor’s 500 member companies. In every sector, at least half of the companies have surpassed or met expectations, with many also getting a boost from a sinking U.S. dollar.

“Growth was particularly strong in key regions of North America and Europe, where we grew sales greater than twice GDP, as well as throughout Asia-Pacific,” Dow Chief Executive Officer Andrew Liveris said on a conference call to discuss quarterly profit of $1.3 billion, which surpassed analysts’ expectations.

While Europe was the source of earnings strength in the first three months of 2017, emerging-market sales were the driving force from April through June, said Jill Carey Hall, a U.S. equity strategist at Bank of America Corp. American companies with large overseas revenue beat estimates for sales and earnings twice as often as those with a domestic focus, she said.

“For multinationals, the news has been not just that their U.S.-based operations are doing well, but in some cases that their overseas operations are doing even better,” said Mark Luschini, who helps manage $74 billion as chief investment officer at Janney Montgomery Scott. Companies in the S&P 500 get 44 percent of their revenue outside the U.S, he said.

A weakening dollar also benefited U.S. companies such as Kellogg Co., which beat earnings estimates and said exchange rates will reduce 2017 profit by half as much as previously estimated. The dollar fell 6.4 percent against a basket of major world currencies in the first half of 2017.

Of the 454 companies in the S&P 500 that have so far reported second-quarter results, 68 percent have beaten analysts’ average estimates for revenue and 78 percent have topped per-share earnings expectations, according to data compiled by Bloomberg. Earnings rose an average of 9.8 percent, while sales have climbed 5.5 percent.

The quarter is on pace to post the highest number of S&P 500 companies beating sales estimates in 13 years, according to an Aug. 7 note from Bank of America equity strategists. Earnings beats also are the highest since 2004, they said.

One glaring anomaly is that companies topping expectations on both sales and earnings aren’t getting rewarded with immediate stock market gains, Bank of America’s Hall said. That’s the first time that’s occurred since the second quarter of 2000, just before the technology bubble burst, she said.

The data point probably signals that company valuations were already elevated heading into earning reports, not that the market gains are over, she said. The Dow Jones Industrial Average surpassed 21,000 and the S&P 500 Index topped 2,400 for the first time last quarter.

On the other side of the spectrum, companies with results that trailed expectations were punished with larger stock declines than in quarters past.

“Some stocks have gotten their face ripped off when they miss,” Luschini said.

For instance, paintmaker PPG Industries Inc. tumbled 6.1 percent after reporting sales that trailed all analysts’ estimates as the Pittsburgh-based company turned away some business in an effort to raise prices. That was PPG’s biggest earnings-day decline since 2010.

Technology has been the best-performing sector, with 93 percent of companies beating estimates, according to data compiled by Bloomberg. Rising demand outside the U.S. drove much of the gains, said Jim Paulsen, chief investment strategist at Leuthold Group.

“More of the global economy is participating in this recovery simultaneously, and that’s what shows up in the top-line results, particularly in technology,” Paulsen said.

Facebook beat earnings and sales estimates in the quarter as advertising revenue jumped 50 percent on mobile demand and its Instagram photo-sharing platform, and Asia-Pacific led gains in active users.

Financial companies, which beat profit expectations 82 percent of the time in the second quarter, are benefiting from increased bank lending and a healthy stock market that supports acquisitions and new share offerings, Paulsen said. Morgan Stanley beat expectations by one of the largest margins in the financial sector as equity fees were bolstered by the recovery in Europe.

The momentum of the past three months should continue into the second half with the dollar remaining weak and global economies continuing to expand.

“The dollar is going to contribute again in the third quarter,” Hellwig said.