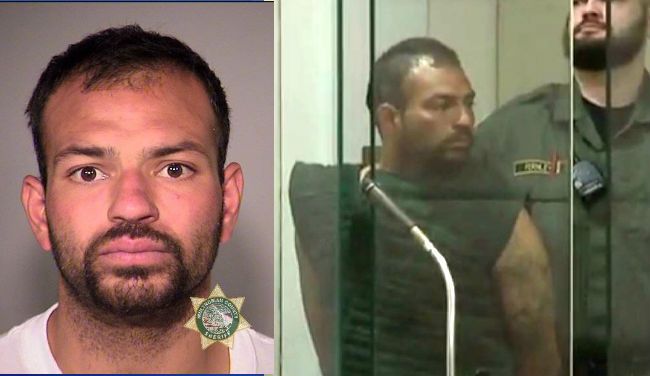 In yet another example of how the left has allowed criminal illegal aliens to run amok, a Mexican man who had been deported twenty times was sentenced to a 35-year prison sentence on Friday over his vile and vicious sexual assaults on two women.

31-year-old Sergio Jose Martinez was sent to the slam by a Portland, Oregon jury after pleading guilty to 10 counts including sodomy and sexual assault.

It was the day after the travesty of justice that took place about six-hundred miles south where a San Francisco jury struck a blow against President Trump by letting the illegal alien thug who murdered Kate Steinle off the hook.

Martinez wasn’t so lucky and like a true thug, hammed it up in court before sneering at the families of his victims and telling them:

“See all you guys in Hell”

Sergio Martinez to victims’ families: ‘See all you guys in hell’

The man who violently attacked 2 women on the same day in July was sentenced to 35 years in prison Friday after pleading guilty to multiple charges.

The daughter of one of the women attacked spoke in court Friday. KOIN 6 News is not identifying her in order to protect her mother’s identity.

“You deserve more punishment than you have received here,” she said. “We don’t feel that justice has been served with this or any possible sentence. The only consolation is that a dangerous person is no longer in a place where he can hurt people because you have been caught and you are going to jail.”

One of the women’s brothers told Martinez, “Sergio, no sentencing is enough…I rather you rot in hell.”

When Martinez exited the courtroom, he told the women’s families “See all you guys in hell.”

“Defendant has entry/removal from United States to/from Mexico 20 times with at least 5 probation violations from re-entry,” according to court documents filed in March 2017.

His most recent removal from the United States was in November 2016, but it remains unknown when he re-entered the U.S.

Records show that Martinez has lived in Multnomah County consistently since 2017. The county has issued 9 failure to appear warrants against Martinez since September 1986. According to an official Portland Police Bureau report, officers had arrested Martinez a total of 13 times since 2008.

The police bureau has a total of 7 different names and various birth dates Martinez has used over the years. Several federal cases have been filed against Martinez for his alleged illegal re-entry into the United States.

In September, U.S. Attorney General Jeff Sessions appeared in Portland and spoke to employees with the Department of Homeland Security. Sessions talked about Martinez’ case, and said that federal immigration officers saw Martinez’s name on a list of inmates and asked to be notified if Martinez was going to be released. The Multnomah County Sheriff’s Office, according to the Department of Justice, failed to notify ICE about Martinez release.

The scumbag broke into the home of one 65-year-old woman who he assaulted and later that day, attacked another victim in a parking garage.

There will inevitably the usual assortment of liberal ninnies and defenders of criminal illegals decrying Martinez’s sentence but the fact is that he never should have been here to begin with and is a perfect poster boy for deporting every criminal illegal that ICE can round up.