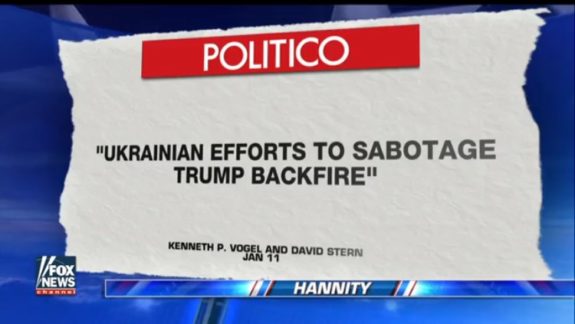 One of the most egregious aspects of the media’s coverage of alleged Russian interference in the 2016 presidential election is its refusal to report on the efforts of the DNC and Ukraine to get Hillary Clinton elected President.

Watchdog group Foundation for Accountability & Civic Trust (FACT) agrees, and have filed a complaint with the FEC over the alleged collusion between the DNC and Ukraine.

A watchdog group will file a complaint with the Federal Election Commission on Wednesday alleging that the Democratic National Committee (DNC) violated federal law by soliciting opposition research on the Trump campaign from a foreign government.

“Federal law and Commission regulations prohibit any person from knowingly soliciting, accepting or receiving contributions or donations of money or other things of value from a foreign national,” the complaint reads.

FACT alleges that Chalupa violated the ban by “knowingly soliciting” a “valuable in-kind contribution in the form of opposition research and information on a Trump campaign official from a foreign national on behalf of the Democratic National Committee.”

The complaint is based on an investigation by Politico, which found that Chalupa “met with top officials in the Ukrainian Embassy in Washington in an effort to expose ties between Trump, top campaign aide Paul Manafort and Russia.”

In a rare admission, Rep. Adam Schiff (D-CA) admitted during an interview with Jon Karl of ABC’s “This Week” that collusion between the DNC and Ukraine is an issue.

According to the Daily Caller:

During a Sunday interview on ABC’s “This Week,” Jon Karl asked Rep. Adam Schiff, who has been an outspoken critic of the Trump Jr. meeting, if he also found the DNC-Ukraine collusion to be wrong.

“No, it wouldn’t be acceptable for the Democrats to accept help from the Ukrainian government,” Schiff admitted.

Schiff tried to argue that the Russian effort to help Trump was much more widespread and reportedly came directly from Russian president Vladimir Putin.

“The scale of what the Russians did is not comparable to anything in [the Politico report],” he alleged.

“So the scale is different, but this is problematic. Acknowledge that,” Karl pressed.

“Well, it would be problematic to get any sort of support from a foreign government,” Schiff said.

Unsurprisingly, the mainstream media has given little coverage to DNC-Ukraine ties, instead continuing its focus on the “Trump-Russia’ collusion that allegedly took place during the election.

As TGP previously reported, POLITICO briefly touched on the real scandal, which is Ukraine attempting to subvert the American democratic process by aiding Hillary Clinton during the election.

Ukrainian government officials tried to help Hillary Clinton and undermine Trump by publicly questioning his fitness for office. They also disseminated documents implicating a top Trump aide in corruption and suggested they were investigating the matter, only to back away after the election. And they helped Clinton’s allies research damaging information on Trump and his advisers, a Politico investigation found.

A Ukrainian-American operative who was consulting for the Democratic National Committee met with top officials in the Ukrainian Embassy in Washington in an effort to expose ties between Trump, top campaign aide Paul Manafort and Russia, according to people with direct knowledge of the situation.

The Ukrainian efforts had an impact in the race, helping to force Manafort’s resignation and advancing the narrative that Trump’s campaign was deeply connected to Ukraine’s foe to the east, Russia. But they were far less concerted or centrally directed than Russia’s alleged hacking and dissemination of Democratic emails.