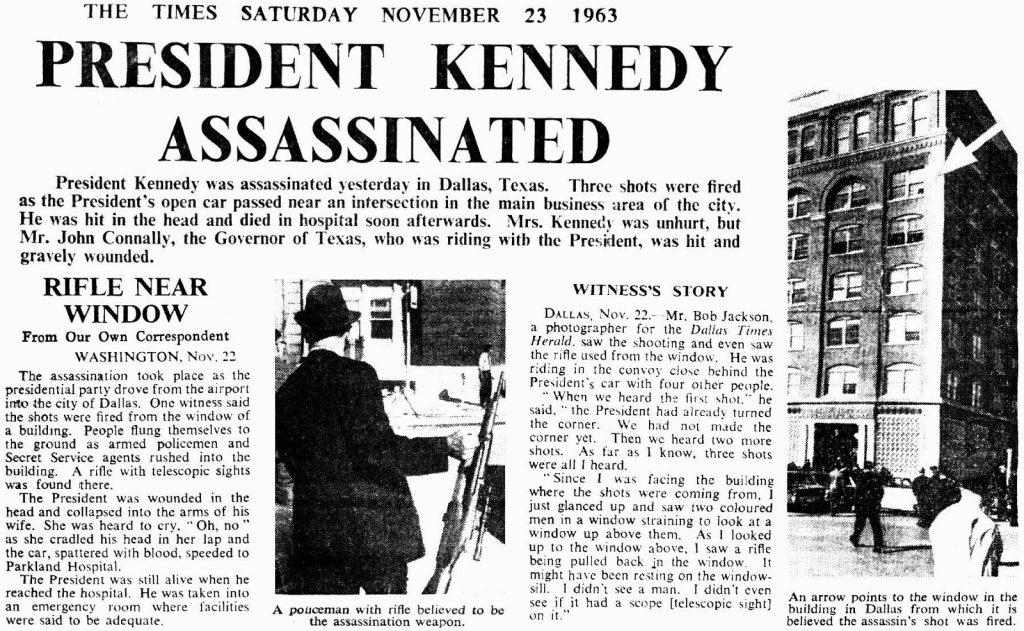 The Communist Party of the United States of America (CPUSA) advanced conspiracy theories in the immediate aftermath of John F. Kennedy’s assassination aimed to discredit the notion that a Communist killed the president of the United States, according to a Breitbart News review of memorandums released last week through the National Archives.
The narrative pushed by the CPUSA within days of the murder of the president remains familiar to this day to anyone with a passing knowledge of the conspiracy theories surrounding the John F. Kennedy assassination. The documents show a clear propaganda effort, sans any evidence for it, to convince the public that the far right, not an extreme leftist, murdered the popular president.

A December 4, 1963 FBI document cites “Who Really Killed Pres. Kennedy?,” literature issued by the Communist Party of Illinois  and dated December 1, 1963, which claimed that “only the Ultra Right and the Southern Racists” benefitted from the assassination. “Dallas is the stronghold of the Ultra Right” and “the John Birch Society,” the literature reasoned in pushing the conspiracy theory.

Later that month, FBI informants reported on a Communist Party meeting in Manhattan outlining strategies to show that Lee Harvey Oswald did not kill the president and that he did not believe in Marxism even if he did kill the president.

“On 12/16/63, an informal discussion was held in at CP headquarters, NYC, and Irving Potash participated,” the FBI memo indicates. “It was stated that Mark Lane, former New York state assemblyman, has prepared a brief that will knock holes ‘in proof that [Lee] Oswald was guilty.’ George Morris said the prime thing to do was to prove he was not a Marxist. Potash said ‘The New Republic’ has an investigator trying to prove he [Oswald] was linked to the ultra-right.”

Mark Lane, the chief Kennedy assassination conspiracy theorist, wrote the 1966 bestseller Rush to Judgement and made a career out of representing fringe figures such as Jim Jones and James Earl Ray. He spent more than a half century before his 2016 death characterizing the official version of the events of November 22, 1963, as a hoax.

Despite casting doubt on Oswald’s beliefs and affiliations, CPUSA leaders corresponded with Oswald before the assassination, encouraged his activism within that group, and acknowledged his work with the Fair Play for Cuba Committee and his life inside the Soviet Union. Though portraying the Right as Kennedy’s deadly enemy after the murder, the party routinely conflated the anti-Communist president with right-wingers, including in “The Ultra-Right, Kennedy, and the Role of the Progressives for Peoples Unity Against Big Business Reaction and the War Danger,” literature sent by the CPUSA to Lee Harvey Oswald just months before the assassination.

In a letter sent to Oswald by Johnson less than three months prior to the assassination, he suggests that Oswald “get in touch with us here and we will find some way of getting in touch with you” should he make it to Baltimore as the ex-Marine had hoped.

While Johnson’s letter indicates the author did not know Oswald personally, he acknowledges at least two of his letters to the organization. Oswald wrote to party chairman Gus Hall and Elizabeth Gurley Flynn, a founder of the American Civil Liberties Union whose prestige on the Left eclipsed perhaps all other Americans belonging to the CPUSA.

Johnson writes Oswald that “you have a right to participate in such organizations as you decide, but at the same time there are a number of organizations, such as the Fair Play for Cuba Committee, which are of a very broad character and often it is advisable for some people to remain in the background, not the underground.”

A bureau source recalled typing at least one of Johnson’s letters to Oswald. “Informant stated that she recalled the name Lee Harvey Oswald,” a memo released on Thursday explains, “and while at party headquarters this date, picked up several of her dictation notebooks. On searching these notebooks, she came upon her shorthand notes reflecting a letter to Oswald.”

Despite the CPUSA acknowledging Oswald and encouraging his activism prior to the assassination, the group immediately shifted gears after the assassination. Oswald, they insinuated, served as a fall guy or an agent provocateur cynically infiltrating Communist groups. The flier issued by the Communists just days after the assassination questions whether authorities allowed his murder to silence him and criticizes law enforcement, which “kept [Oswald] for two days without the right to see counsel.”

The party notes neither Oswald’s request for CPUSA chief counsel John Abt to represent him nor Abt’s admission that he did not think he would or could represent the accused murderer. In the documents released last week, Abt’s name comes up as the person who served as the go-between named to bring the Oswald correspondence from the Communists to the FBI. Both the Venona intercepts and the files of the former Soviet Union name Abt as an agent of the Kremlin.

“On 12/3/63, John J. Abt, who has represented the CP, USA before the [Subversive Activities Control Board], as well as individuals before that board, advised the [FBI’s New York Office] of the desire of his client, Arnold Johnson, who is Legislative Secretary of the CP, USA, to make available correspondence between the subject and the CP, USA,” one FBI memo notes. “Such correspondence was turned over by Abt in the presence of Johnson at his office, 320 Broadway, NYC, on 12/3/63.”

A December 8, 1963, memo on a house meeting of seven Communists in Wheeling, West Virginia, describes the same man who encouraged Oswald in his Communist activities through correspondence denying Oswald legitimately took part in such activities.

Arnold [Johnson] explained that since Oswald was considered a Communist then a wave of hysteria was about to explode against the C. party of America but by the time the re-actionaries were getting started it was announced that it had been disclosed that it seemed like the extreme right had been active. This was bore out by the declaration of Russia that it was not the C. party that had done it because Kennedy was a friend of the Working class but the work of the extreme right or almost a fascist act. This seemed to sober the masses that it was the same caliber of people who had insulted [Adlai] Stevenson only weeks before in Dallas, Texas…. Arnold Johnson further stated that no real Marxist Could do such a thing. There is not much doubt about that since the Soviet Union expelled him by not giving him Citizenship to the Soviet Union because they thought him to be an Agent of Fascism.

After so recently emerging from a decade or so that witnessed a crackdown on subversive activity, the American Communists loathed the idea of the government, again, scrutinizing its activities, a situation which a Communist murdering the president of the United States figured to bring about. The FBI memorandums released last Thursday show a Gus Hall so frightened that he would not show up to work at party headquarters and Arnold Johnson and Irving Potash arriving at a meeting with the FBI “in an excited state.” Rather than live with the consequences that one of their own murdered the president of the United States, the Communist propaganda apparatus immediately went into overdrive to push the idea of a conspiracy to kill John F. Kennedy orchestrated by the party’s enemies. The campaign’s effectiveness if not truthfulness sees vindication in so many, to borrow from their own verbiage, “dupes” pushing CPUSA propaganda 54 years after the fact unaware that they push ideas initially advanced by the leadership of the CPUSA.

“Who really was he?” the Communist literature dated nine days after the assassination asks of Lee Harvey Oswald. “An adventurer who was made the ‘fall guy’ by higher ups? A dupe? Or an innocent victim? What is the truth?”