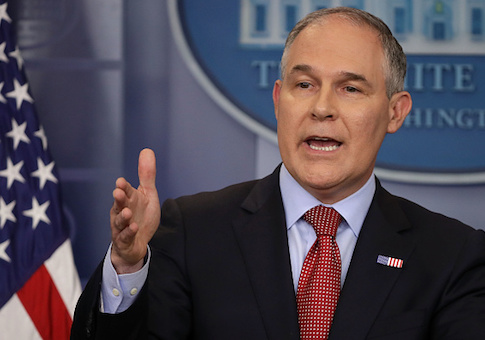 An Environmental Protection Agency employee who says she is quitting on principle over President Donald Trump’s budget is eligible for retirement.

Elizabeth Southerland, director of the Office of Science and Technology in EPA’s Office of Water, was making $250,000 a year. In farewell remarks, Southerland said she was worried about government employees and environmental consultants losing their jobs.

Her protest against the budget came over two months after the budget, which is not likely to be adopted in full, was released.

“The proposed FY18 budget cuts to state, tribal, and federal environmental programs would result in thousands of jobs lost in the short term, in EPA, state and tribal governments, and the private environmental consulting firms which support those governmental agencies,” Southerland said.

“It’s hard to believe that Elizabeth Southerland is retiring because of a budget proposal and not because she’s eligible for her government pension,” said EPA spokesman Jahan Wilcox. “We wish Elizabeth Southerland the best in her retirement, and the EPA will continue to refocus on our core mission of protecting our air, land and water.”

Other employees have made political statements after taking early retirement.

The Washington Post reported that Mike Cox, a “climate change adviser” for the EPA, quit with “gusto,” but failed to mention that Cox was also eligible for his pension.

Southerland said she quit because of “major budget cuts” to the EPA that have not occurred. Trump proposed cutting the agency by 31 percent in May, though Congress is not expected to take up the president’s budget.

Southerland said she disagrees with the Trump administration’s deregulation agenda and claimed “our children and grandchildren” will have to pay the price for reversing Obama era climate rules.

“The major budget cuts to EPA, state, and tribal environmental programs and the potential repeal of many existing regulations and science documents is not a cooperative federalism approach,” she said. “It is an industry deregulation approach based on abandonment of the polluter pays principle that underlies all environmental statutes and regulations. When the federal government abandons the polluter pays principle, it will be up to the states, tribes and local government to decide how much of the polluters’ bills they will ask their residents to take on.”

“The best case for our children and grandchildren is that they will pay the polluters’ bills through increased state taxes, new user fees, and higher water and sewer bills,” Southerland said. “The worst case is that they will have to live with increased public health and safety risks and a degraded environment.”