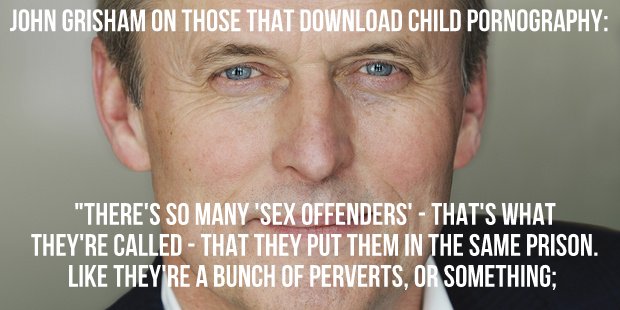 John Grisham is one of the world’s most well-known authors. He’s sold more than 275 million books since he emerged on the scene in 1989, pulling down $200 million, Forbes reported.

Some of his works, including “The Firm,” have been turned into Hollywood blockbusters. And he continues to rule over the book world, pulling down millions each year.

But Grisham has some weird thoughts on pedophilia.

“We have prisons now filled with guys my age. Sixty-year-old white men in prison who’ve never harmed anybody, would never touch a child,” he told The Telegraph in 2014.

Grisham said that he has “no sympathy for real pedophiles. God, please lock those people up. But so many of these guys do not deserve harsh prison sentences, and that’s what they’re getting.”

But he said something’s askew with the American justice system.

“There’s so many ‘sex offenders’ — that’s what they’re called — that they put them in the same prison. Like they’re a bunch of perverts. … We’ve gone nuts with this incarceration,” he said.

Later, after his comments caused a firestorm, Grisham issued an apology. “Anyone who harms a child for profit or pleasure, or who in any way participates in child pornography — online or otherwise — should be punished to the fullest extent of the law.”

“My comments made two days ago during an interview with the British newspaper The Telegraph were in no way intended to show sympathy for those convicted of sex crimes, especially the sexual molestation of children. I can think of nothing more despicable.”